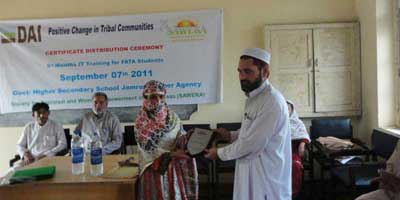 The murder of Farida Afridi, a Pashtun women’s rights activist from FATA, in early July 2012 has left us all, especially Pashtuns, many questions about women's leadership in our society.  Although I do not have the answer to why she was murdered, it is frightening to know that the underlying explanation is partly our society’s immersion in an extremist interpretation of Islam and a lack of education.

Afridi’s death, as one of the very few Pashtun women leaders in any field, leaves a large gap and begs the question of why there aren't more like her. It is certainly not because Pashtun women are incapable of serving as leaders. They have historically repudiated this assumption when given the opportunity - or when they have created opportunities for themselves. Samar Minallah, Bushra Gohar, and Begum Nasim Wali Khan are among the most distinguished. But how many young Pashtun girls dream of becoming leaders of their society when they “grow up”? The answer is, very few. However, blaming extremism and a lack of education for this is far too simplistic.

Our society believes that leadership is a “male” job, and it is feared that if women become leaders, the family system will break down. While the popular African proverb teaches us, "It takes a village to raise a child," that lesson has been ignored in our society where women are the only ones responsible for raising children and hence, many are deprived of a chance to lead.  The same society views men as both domestic and public figures— but one cannot dare view the woman as both a mother and a "public" figure simultaneously. This means that even with quality education, there is a dearth of Pashtun female leaders due to societal norms and practices.

The norms and practices in Pashtun culture that are largely responsible for holding women back are very specific. Honor, although not an exclusively Pashtun notion, always comes first. A family’s—read: man's— honor depends almost entirely on a woman’s public behavior. This behavior entails the proper practice of the pardah, the seclusion of women from society at large. If anything she does brings shame to her family, then the family becomes the victim of other people’s peghor, taunting, which all families strive to avoid. The threat of peghor, which translates to ta’na in Persian/Urdu, or ridicule with the intention of reminding women and their families of their failure to maintain honor, is thus the single most important reason why Pashtun women are denied positions of leadership and, ultimately, why many of them fear leadership.

While a man rarely may be capable of bringing shame to the family, it is the woman who gets the constant reminders to "please take care of our honor." When a woman is raped, the family's major concern is seldom her personal dignity, her health, or the effect that the rape might have on her as a victim; their major concern is instead their own honor. This is where the idea of honor becomes both complex and oppressive. On the one hand, we do not want to get rid of it because, for many families, honor is all they have—and it would impractical and ludicrous to attempt to rid our society of it in the first place; but on the other hand, it is so oppressive to women that some of their own basic human rights are denied to them because of it. That explains much of the violence against women in the name of honor: we dishonor our women, our own flesh and blood, to respond to our own dishonor; we sometimes kill them when they "dishonor" us just to assure the rest of the society—people whose opinion should not matter at all—that we care more about what they think of us than of our own women. And, obviously, dishonoring and killing our own daughters, wives, and sisters help bring our honor back.

Clearly, a family's honor is so delicate that it can be stained by anything the girl does—talking to a male, falling in love, wearing “unacceptable” clothing, walking in an “unacceptable” manner, living on her own, driving, choosing her own husband, appearing in the public without a full body covering, or even appearing in public at all—and the list goes on. Needless to say, not all families immobilize their women in the same manner or to the same extent.  Nonetheless, the threat of peghor compels the family to take action against the family member who has "dishonored" its name. The action therefore does not seem to matter to them so much as other people's view of their honor. And this is why education does not necessarily help create more leaders who are women; it is not that the family is stupid or ignorant but that it has its honor to preserve –from other people's taunts.

Thus, when a young girl is made aware of these norms and the consequences of not upholding them, there is no questioning why she feels uncomfortable dreaming of doing something big for her people. When all her life she has been expected to be an invisible creature, hidden behind the parruney, the traditional full body covering required in many parts of Pakistan, it is no surprise when she is afraid of doing something that will make her stand out. It is hardly a lack of self-confidence. Rather, it is the desire to remain invisible for the sake of her family's good honor that keeps many women from becoming public leaders.

The harassment and murder of female leaders is a universal plague, not exclusive to any one society. However, incidents like Farida Afridi's murder are the final straw in the hurdles that keep most Pashtun women from leading. When we hear of the assassinations of the women who are role models to us, we shudder—and some of us take a step back and wonder if we would want our lives and efforts to end that way, too. Some of us start to question ourselves, doubt ourselves; our dreams become hopeless and pointless; we reconsider our future, and we convince ourselves that "I'm just one individual; what can I do for so many people?" Some of us immediately slap ourselves for thinking this way, re-energize our sense of valor, and remind ourselves of our ambitions to help our people. This is why we still have some Pashtun women leaders among us. They, and perhaps their families as well, have grown past the threat of peghor: they know what their coming out into the public means, and they recognize the dangers they may face on the way. To many traditionalists, these women may appear as selfish women who just want attention from men and the public. And a large number also see them as a danger, a serious threat to the traditional roles designated for women "by God"; some also view them as a negative influence on their own women, which might explain Farida Afridi’s murder.

One could convincingly argue that women can be strong leaders inside their homes. However, the issue here is not of private leadership; it is of public service. It is of not permitting women to play a role in solving major social problems; it is of the lack of appreciation for female politicians, social activists, and other leaders whose roles and careers are not confined to their homes. Yet, if the positive outcomes of women's leadership are contrasted against its perceived repercussions, it is quite obvious that the former overshadows the latter. To decry women's leadership solely on the basis of what might happen, something "bad" that may lead to peghor, is a mistake on the family and society's part. At a point in history when women have literally reached the moon, the threat of peghor and ta'na are attacks on the humanity of those women who are denied equal access to positions of leadership.

As Farida Afridi proved, a Pashtun woman can respect her culture and religion and be of service to her people. She conformed to the practice of parruney, never showing her face to the public, while fighting for equality and working for peace among her people—but she was killed anyway. There would be no issue here if something as necessary and important as a woman's equal participation in her own society were not grounds to dishonor the family or to see a woman as a threat to the society.

The writer is a PhD student of Islamic Studies with emphasis on gender relations in Islamic law and the Pashtun society. She blogs at orbala.blogspot.com and tweets @qrratugai.