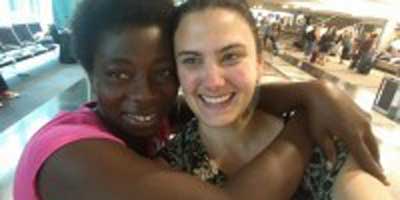 This article was first published by World Pulse

Imagine a woman lying helplessly in a private hospital, after a severe section of midnight beating by her husband, beside her is her 28 day-old baby that she delivered safely even with pregnancy induced hypertension. As she was gazing into space, the male doctor moved close to her bedside and whispers to her:

’Lady, it's either you stop this beating or you live with it all your life, that's if you ever survive from another round of his punches one midnight, it’s a never ending journey for our women’.

That lady was me.

That day, unlike some other women, I resolved to become empowered, to not only defend myself but to be an example unto other women who are experiencing domestic violence, but unable to speak out due to socio-cultural, economic, or religious reasons.

Armed with the above aims/goals, I began to search for a platform to raise my voice, to share my experience and to encourage other women to speak out. World Pulse became a dream come true; I joined and I began to pour out my soul.

I saw light, I saw hope, I saw a new future with world Pulse. Therefore, I began to work, with passion, with determination, and with hope. I believe in the World Pulse dream, vision and mission. Getting there and getting, was not a challenge at all, because, I just want to do something to make a change. Therefore, I settled down to enjoy the work, the community, and the sisterhood.

Surprisingly, on World Pulse, I did not only access a platform alone, but I discovered that, I have my sisters' shoulders to lean on, listening ears, and in a short time, my online sisters became a mountain of women and I was systematically placed on top of this huge mountain where I do not need a microphone before the world listens to my story.

I began to speak. No fears, no inhibition. On the other hand, World Pulse began to push me, fuel my fire and drag me by force into the hall of fame. The more World Pulse pushes me up the ladder of success, the more I drag my riverside sisters along with me, I made up my mind to work with unheard voices in my community.

In 2009, World Pulse discovered that my voice would be relevant for the future. I became selected; in 2011, a sister that I met on World Pulse, introduced me to her organization, they dragged me from the corner of my room and rented an office for me in Festac town. She said, she saw something in me. The more I grow, the more I nurture and grow more women in my communities.

In 2013, World Pulse nominated me as one of the Women have Wings’ Women of Courage award. I won the award and with that, I was able to buy seven brand new sewing machines, 15 brand new chairs and two tables.

That same year, my World Pulse sister, who partnered with us to rent the first office, decided to rent another office for us at the riverside. This time, it was three bedrooms. We increased; we set up a library at the riverside community, with 450 books and 55 new wooden puzzles that we bought from the USA. Additionally from funds from the award, we continued with our women and girls programmes at the riverside, but this time, with better opportunities to serve my sisters.

We were able to organize AnLiberation Serifkara accessories training for 30 women, free of charge, it lasted for six weeks.

When World Pulse supports us, we support other sisters, which creates ripple effects.

In December 2013, I received an urgent mail from World Pulse founder that Women have Wings will be nominating me as Aspen scholar in 2014, in January 2014, I was accepted and the visa process began. The Aspen scholarship goes with many other opportunities.

Recently, June 25th, 2014, I hugged Jensine Larsen, the founder of World Pulse at Denver airport, and as we wept and refused to wipe our tears, I could not but imagine those agonizing years, when I had to decide whether to eat breakfast or use the money to pay the $1 internet café charges, I could not but remember those years: when I had to spend extra hours online, typing my articles because I could only type a word per minute in a cyber café; I could remember when I had to find a man to accompany me to a cyber café because it’s a dangerous area in Festac town. I could not, but remember all those hard choices, that I had to make in order to remain online; to mingle with sisters, comment and post articles.

That day I realized that we are not just online community, No, we are a 'community of women growing women'.

I allowed my tears to flow in Jensine's arms, not because I am sad but because there are thousands of Olutosins, who are out there, thinking about whether to sacrifice the $1 cyber café charges for breakfast or for sisterhood. I remembered how Jensine Larsen would organize online speaking engagements for me, in Texas, Switzerland, etc. I became a remote voice creating change.

Now things have changed; before my arrival in the USA, World Pulse had organized speaking engagements for me, to address powerful women, who are agents of change, too. Not a remote speaker anymore, its real line speaker. It can only be called glorious.

As we stood in line at the airport, a new word came to mind; and I said we are real line sisters.

We came up with a plan to draw my dream and plan of action, because last month, an online sister who is equally a World Pulse member had fundraised for our organization in Worcester, UK, where, Nigerian sisters, who do not know me, the mayor, and several women were in attendance, too; they raised an auction of promises for us.

I have never been to the UK before, I have never met the sister that organized the fundraising event, but she believed in my dream of a transformed world for poor riverside women. She sent 2000 GBP to my personal account, on the 23rd of June, 2013. We bought a plot of land in Agbara; I mean that we bought our organization's land! Paid for the agency fee, paid for the corner piece, paid for the omo onile fees (the families of the land owners), paid for "walking in the bush" we paid for everything. Imagine our women owing their land 120 feet by 60 feet; I mean women who are poor.

World Pulse brought me to limelight; I no longer weep when I am afraid, I confront my fears and walk over them, I became a strong sister, too. Not a victim of domestic violence anymore.

My story is the story that fuels hope, it strengthens, and encourages. My World Pulse sisters who are in the remote areas, too, can do it! Sisters can become real line sisters, standing in the queue of progress for other sisters.

It is possible, but to become real life, we must first be online, because there is a great ocean that separates sisters and this ocean can be crossed though online connection that breaks every divide after which, the dream will become real and we can say, we are real line sisters waiting for one another in several airports in the world.

Just as Jensine Larsen waited for me at Denver International airport; where, though we met for the first time, but there was not introduction, after the hug that lasted for several minutes, we just continued our discussion, where we ended it online. It's amazing, a never-to-be forgotten moment.

The new discussion now is, how do we build the transformation centre, a place of refuge, empowerment, succor for our women, that will house our children's library, too?