Olutosin: Turning Trash to Treasure with Grassroots Women in India 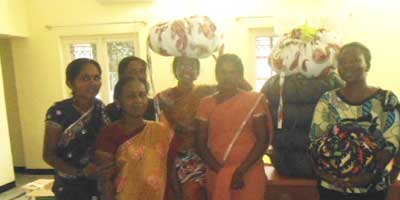 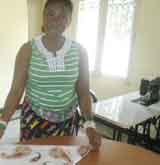 Olutosin demonstrating the production processAt exactly 5 am my alarm rang. It reminded me to open the Mahila Samakhya Karnataka venue of the Tosin Turn Trash to Treasure training for women who had traveled all night from various districts to attend the programme.

At 6.30 am, the women began to walk into the venue in pairs. There are two women representatives from Bidar, Chmarajnagar, Koppal , Mysore, Bellary, Bagakote, and Bijapur districts.

The women were visibly tired yet eager to learn about the cooking bag. After some hours' rest, the training began at exactly 11.00 am and it was declared opened by the state director of Mahila Samakhya Karnataka - Ms. Cynthia Stephen.

Tosin Turn Trash to Treasure (TTTT) is my dream project at the Kanthari International Institute for Social Entrepreneurs in Kerala, India. The main objective of the project is to use waste materials/trash to produce precious objects that are marketable and will become permanent income-generating businesses for women.

Cooking bagOne of the identified trashes to treasure is TTTT's cooking bag. It is an innovation that uses styrofoam waste to produce a bag that brings half-cooked food to a complete end in less than 45 minutes. This bag has double advantages; it works for both cold and hot food.

The primary target is women who have undergone abuse; this is to teach them that if they can turn waste to treasure, they too could turn their lives around to become assets in their communities.

Mahila Samakhya Karnataka organized a TTTT training for their Sangha women who are tailors. It made the learning process easier and smooth. Therefore, the training yielded results on the first day, when the first cooking bag was ready at 5 pm.

Olutosin with the finished productsIt is expected that the trained women will return to their community to empower other interested women.

Mahila Samakhya Karnataka works in 12 districts in Karnataka. Its main goal is to empower rural women in the state. The training started on the 22nd of October and continues till Saturday 26th, October, 2013.