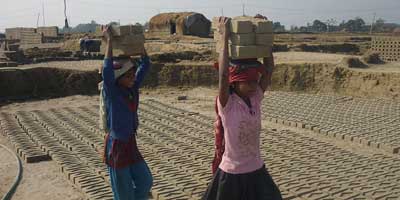 Nepal is one of the least developed and poorest countries in the world.

Nepalese children suffer from poverty, malnutrition, violence, child labor, and other dire circumstances. These children are in great need. As they fight a battle for their lives everyday, the most basic of their rights go unfulfilled.

According to Humanium for Children, in spite of international aid, some of the problems faced by these children are as follows:

Nepal has a high incidence of child labour. These children work to help support their family's needs. More girls than boys work since boys are usually enrolled in school. Often these children work in very dangerous conditions.

The health care system is lacking in materials and competent workers.

Forty-five percent of children die before the age of 5 and 21% are underweight.

One of the most tragic occurrences is that of child trafficking.

Trauma, illness and psychological disorders become the fate of young girls who may be sent to brothels – some as young as 7.

According to the Asian Human Rights Commission (2012), one main challenge facing Nepal is to build democratic and inclusive institutions allowing the participation of all in the decision-making process.

The failure to improve Nepal's human rights record in 2012 underlines government negligence toward the protection of the human rights of the people it serves. The basic structures of justice have been eroding in Nepal.

Without producing a new constitution, the dissolving of the Constituent Assembly opened a new era of political uncertainty. Few concrete achievements have been made to protect victims of human rights violations.

"....the people of Nepal should seize this opportunity to reclaim the terms of the debate and make sure the institutions that will be developed will crystallize the collective sense of fairness of Nepali people."

Regardless of one's nationality, ethnic origin, colour, gender, religion, language or any other factor, there are rights that are inherent to all human beings. All people are entitled to their human rights free from discrimination.

These rights are inalienable; they should not be denied except in cases when a person is found guilty of committing a crime by a fair and just court of law.

Article 1 of the Universal Declaration of Human Rights states: "All human beings are born free and equal in dignity and rights." While each of us is entitled to rights, we must also respect the human rights of others, including those of children.

What are children's rights?

What do parents and the law owe to children?

To what extent must parents have control over their children's lives?

When does the government need to step in and remove a child from his/her family in order to protect that child's welfare?

These questions may not be easy to answer with clear-cut guidelines. In fact, these questions have been debated by philosophers and lawyers for years. The most important point to remember is that children – though not adults, are also human beings.

Children, by their very nature, do not have the wisdom or experience to make their own choices independent of a responsible adult. There are certain rights that all adults should have, but not children, e.g., the right to vote in governmental elections, the right to smoke, the right to operate a vehicle, the right to run for office.

There are, however, certain rights that all people should have including children such as the right to live free from hunger, abuse, neglect and other inhumane treatments and conditions.

In 1989, many countries promised all children the same rights by adopting the UN Convention on the Rights of the Child. These rights are based on what every child needs to survive and grow in order to reach their full potential. Everyone under the age of 18 years has the rights as outlined in the UN Convention.

A few of these rights include:

Every Child Deserves the Freedom to be a Child

I believe that every human being should have the right to a childhood free from the threats of abuse, violence, hunger, disease and unsanitary conditions.

Every child should be given the best education.

Every child should have access to the most nutritious food available.

Every child should be free from adult responsibilities such as marriage.

Every child should have the freedom to be a child – to play, to learn and to grow and develop in a nurturing and supportive environment.

The children of Nepal, and children everywhere, need to know these freedoms.

Dr. Karen Lambie is a retired teacher of gifted students and professor of educational psychology. She taught for 32 years. She graduated with a Ph.D. in Educational Psychology from the University ofGeorgia in 1993. She has a Masters degree in the teaching of science, and a baccalaureate in Elementary Education. She has also made presentations for several local and state conferences and one national conference, on various topics, including:

"Learning, Memory and the Human Brain,"

"Multiple Intelligences and the Classroom,"

Current presentations include, "Shaken Baby Syndrome and the Period of PURPLE Crying,"

and "Female Genital Mutilation: What is it and what can be done to stop it?"