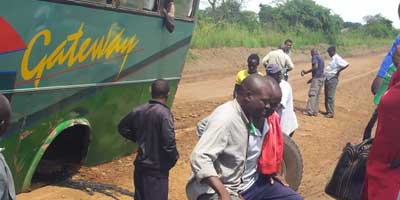 After a silly amount of time in Kampala, first with my friend visiting, then with visa issues and finally just because I was having a lot of fun networking, I eventually got my act together and decided to head back upcountry.

Easier said than done this time. After my previous attempt at getting the bus straight from Kampala to Kotido, I had avoided doing it and started breaking my journey in Lira; but with my final month here looming, I decided to mission up in one go. Not my best idea.

At about 2.30pm, after hours on the bus (which started from Kampala at 4am, although I was on it at 3 to be sure of a place), there was a sudden jolt and then we came sliding to a halt. Very confused, but with a window seat, I peered out to take a look and saw one of the rear wheels of the bus very much detached from the rest of the vehicle. After getting out, which everyone did, it became clear that the rear axle had snapped and, as there doesn't seem to be a Ugandan AA, it was going to take a while to get moving again.

I made a few panicked phone calls to the effect that I didn't think it was likely I would be making it to Kaabong that night, and then I sat down and read. We were in the middle of nowhere, miles from where I needed to be; but as I've always said - I am up for a new experience. I was also befriended by many people and given mangoes to eat so it really wasn't that arduous, except for the heat.

After three and a half hours, another bus arrived to take us onwards, leaving the crippled bus sitting in the middle of the road. All was well I thought; but no - this bus also decided to break down just before Abim. Luckily, it was only a puncture, so after an hour in the dark we were able to get on our way again.

I reached Kotido at 10.30pm with absolutely no idea where to sleep or how to get to Kaabong the next day, when someone told me there was a car going to Kaabong that night! The relief was great and knowing that I would be sleeping in a familiar bed was glorious!

So I jumped in the back of the pick-up with a dozen other people, a lot of luggage and some goats, tired but happy.

I always thought when I saw people driving in pick-ups in films and TV that it looked like a lot of fun; you know - wind in your hair, freedom, etc. Not true on northern Ugandan 'roads': losing feeling in your feet which are under someone's bag, and with another person's elbow smashing you in the nose at every bump! But I did eventually turn up at the AWARE compound at 1.30am in one very bruised piece.