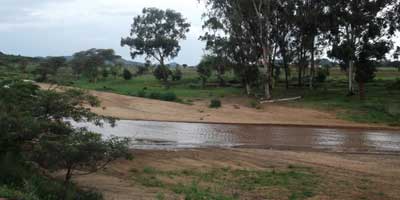 River now flowing at the edge of town

Attitudes have changed here, overnight. The happy-shiny-yay-rain thing had been put on hold because on the 29th May a teacher was murdered (shot) in Camp Swahili (an area in the Town Council). No one seems sure why it happened, but people are more on edge; no one wants to go outside after dark and even in the AWARE compound we are keeping the door to our accommodation shut once the sun has set.

This trip to Kaabong seems to be acting as a reminder to me that this isn't the idyllic, uncomplicated life that it is easy to think it is; it isn't a fun little holiday, where I get to discover that I can get used to not having all the things I take for granted at home - but I am actually in a place where life is hard and short. It has been simple for me to forget this fact, as I am so well-looked after, but reality has a way of forcing itself and not always in a pleasant way.

Two days after the first murder, another one occurred. Again in Camp Swahili (leading to people shaking their heads and saying that the area was becoming a problem). I don't go there very much, as it is a bit of a walk, but the one time I did visit I was shown the place where all the prostitutes live (they tend not to be Ugandans but rather refugees from the Congo and other countries who settled here).

The murders have meant that there is a sort of unofficial curfew in place; it generally isn't a good idea to be out and about after about 8pm. I have a feeling that there is a touch of over-protectiveness going on from my friends, but then again, I have always been a bit blasé about life in general and I am only a visitor here, so realistically probably have no clue!

On the other hand, the office is wonderfully busy - many people are coming for the PACE starter kits (boxes that contain a jerry can, tablets to make water safe, a mosquito net and condoms) which are given out to people living with HIV/Aids. Others come for the free reading glasses that AWARE Uganda gives out, but the Maternity Waiting is sadly empty at the moment waiting for more referrals from the hospital.

My soap seems to be coming together; the lye is not yet strong enough, but I hope in a couple of days it will get there! Grace [the founder of AWARE] is away at the moment in Kampala recovering from a bout of malaria (which seems to be regarded in the same way I think about a nasty cold: inconvenient but inevitable and treatable) - but we expect her back shortly.

My Karamajong skirt. It wraps around and is tucked in with tabs.Oh, and I am one step closer to being a proper Karimajong: I am now the proud owner of a traditional skirt and it only cost me a fiver!