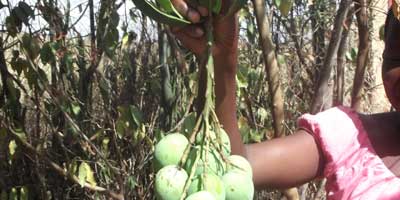 Mangoes from the orchard

One of AWARE Uganda's longest-established projects is their orchard project, which I visited today.

Even in the dry season there is still fruit growing – I came away with unripe mangoes, a lemon, and a couple of some fruit I don't recognise but which tastes good.

The orchard is a brilliant project, and I am really looking forward to seeing it in the rainy season with all the fruit ready.

Bee box in treeThe aim of the orchard project is for the women of the group to be able to feed themselves and their children, providing vital nutritients in this isolated, largely barren environment - and also to provide them with an income from selling extra fruit at the market.

There are guavas, mangoes and lemons among other things, as well as boxes for bees.

Each women grows one tree, as far as I can work out. (I really should get solid facts before I write!)

Guardian of the orchardAs with everything here, it is definitely not problem-free. The caretaker explained that thieves are a major hazard when the harvest is ready as they lift up the fence, thus avoiding the barbed wire at the top, and come and steal the fruit that everyone has put so much hard work into.

Theives are so prevalent that you can see the paths they have created coming in to the orchard.

The answer is to cement the fence to the ground, which is yet another thing on the AWARE to-do list. I am pretty sure if the list was ever written down it would be a small mountain of paper, as the tasks here are endless!

It doesn't seem like an easy job, being guardian of the orchard; apart from the snakes and the cold nights, the poor man had even been shot in the shoulder by plunderers!

Kaabong solar pumpThieves, however, are not only after the food.

Within the fence of AWARE's orchard, but separated by another fence, is a solar-powered pump that supplies water to the school and the hospital, which has had its panels stolen at least once.

As with anything it is an up-hill battle against the environment, people, and the general difficulties of life in Kaabong.

Not the most uplifting piece I am afraid, but hopefully you will like the pictures. Oh, and a funny story from today: coming back from the orchard, we were followed by a women who was convinced that I was her sister and used to be black, but I had been stolen from Karamoja and become white. She was ecstatic that I was back.