Linnet Griffith-Jones: in the Land of Jiggers 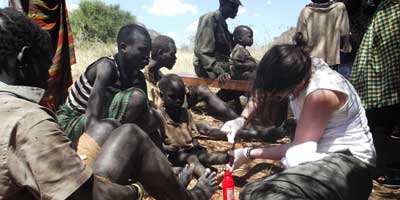 So I mentioned that I was travelling again to the lands of jiggers [flea-like parasites] and so I thought I would tell you all about it.

AWARE team membersJiggers are turning into an epidemic here. They cripple people and some people have even apparently died from infestations.

The health inspector at the DHO [District Health Officer] told me that when they surveyed the district all but one sub-county is effected and that nearly 10,000 cases have be discovered. It seems a bit odd to me that they didn't think to, you know, DO something about the cases they found, but apparently this isn't how things are done.

Back to the Homesteads

So we piled a load of supplies and people (including me) into the back of the pick up truck - with members of AWARE Uganda and the assistant Health inspector from the DHO in the front and set off on what I can only describe as I white-knuckle ride.

Entering homesteadWe went to the same village as last time - by village I mean collection of homesteads – which together house around maybe 40 people and are bloody fortresses of sticks and thorns.

There are many taboos about entering villages, for instances strangers aren't allowed in when a woman is pregnant because this will make her miscarry! Luckily, I made friends with the chief of one homestead, so I got to look around.

About 100 people turned out, from women carrying babies to the elderly, to see our demonstration of basic hygiene: we explained that if you sprinkle water on the floor of your mud hut and wash your hands and feet everyday, jiggers will be more likely to leave you alone.

Getting Over My Phobia of Feet

Then came the the practical bit: washing and inspecting people's feet. Now those of you who know me, know that I have (or rather had) a massive aversion to feet: a bare foot pointing in my direction was enough to send me fleeing.

I had to get over this pretty damn quickly as, after others had washed people's feet in soap and water, I was in charge of covering the said feet with hydrogen peroxide to get rid of some of the more heinous bacteria and the jigger eggs that were close to the rotten skin.

Poverty and Lack of Knowlege Combined

At one point a jigger just fell into my gloved hand, the victim's skin was so decayed.

Here, bare feet and flip-flips made of old tyres are combined with a lack of washing, and the condition of people's feet are not exactly stellar: I think MSF [Medecin Sans Frontieres] should be trying to get some pedicurists to do their bit for humanity.

It took about four hours, several gallons of peroxide and a lot of effort. but we finally got through most people.

Jiggers cause severe damage Ufortunately our supplies of peroxide didn't hold out for the last few, but hopefully they got the message that they can do without it if they wash more often.

The day wasn't glamorous and it was jolly hard to watch.

One boy, about 10 years old, had about twenty jiggers extracted. He screamed a lot, unsurprisingly - in the interest of speed Nurse Ajilong (one of the founders of AWARE) was using a scalpel blade to find and expel the horrible wormy things, but for a while I managed to distract him with pictures on my camera.

As well as travelling to this village, we will hopefully be going to more villages and also providing a jigger removal service at the office for as long as the supplies hold out.

Now it is time for a rest; saving humanity really takes it out of you!