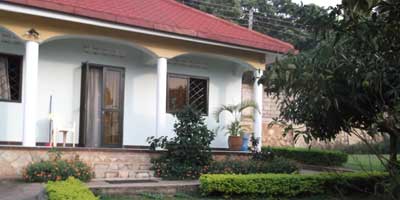 So last time I asked if I should be worried: the answer is a resounding 'no'! Apart from a mad sprint from one terminal to another at a very crowded Dubai airport due to my flight from London coming in at the “last call” point for my onwards flight, everything has gone swimmingly.

With Teddy, in London, preparing documents before leaving.I don't know if it is Ugandans specifically or people in Africa in general, but I have met some of the friendliest people ever since I got here, they might even outdo the Irish on just general loveliness! I knew from meeting up with Teddy [Technical Director of AWARE Uganda] in London that I was going to be looked after but not to this extent.

Grace [Founder of AWARE Uganda] met me at the airport with Sam and Tony, who sorted out a sim card, gave me water and took me to my current home: Teddy's lovely house in Makindya, just outside Kampala. After being fed, I was sent to bed – exactly what I needed after barely any sleep on the two delayed planes.

Even strangers are overwhelmingly kind; yesterday at a petrol station/butchers I was given a samosa by a man just because he wanted to see if I liked it (I did, it was sweet and filled with plain white rice) and even the people who stare at my ultimate paleness look away if caught, not because they are embarrassed at being caught looking, but rather, I think, because they don't want to make me feel uncomfortable. After my short travels in South East Asia, I expected a lot of extra attention because of my skin colour, but even the people selling things in traffic jams seem not to notice it and spend no extra time trying to press their extensive range of wares on the Mzungu!

PatrickWe are still at the point of sorting everything out for me – Patrick, who I am sure has better things to do, but has been assigned to look after me, sorted out the internet on my phone and Grace has got me business cards (which make me feel like such a grown up – never having had them before), and today we bought modem/dongle thing so I can hook up my laptop and bore all of you with my ramblings and hopefully start being useful to AWARE.

I am trying to think of more clichés to add, but as I can't think of any I will leave it at this, especially as I have to get ready for a night on the town. Until next time, internet buddies.