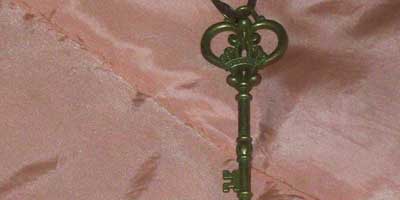 This past Christmas, I received a special gift from a dear family member: a key.

Not for my house! But a pendant to wear around my neck to remind me to think about those who've been trafficked and can't go home due to some criminal(s) enslaving, exploiting, and holding them against their will.

Much has been written about the multi-billion dollar industry of modern slavery – $32 billion a year, the International Labour Organization (ILO) has estimated. It is like a cancer spread throughout the globe: malignant human behavior growing uncontrollably and caused by abnormal and uncontrolled greed that causes untold suffering.

And it is regional. Local.

Maybe right down the street from you.

I have been aware for a number of years that human trafficking – particularly sex trafficking, could happen anywhere – in cities or rural areas, but last November 2014, when two men were arrested for kidnapping, beating, and trafficking two women in a hotel literally down the road from me...it just felt a little too close for comfort. I thought, “Not in my backyard! Really?!”

As if my little town should be immune from such criminal activity.

It is criminal: the common thread in every instance is ongoing exploitation through the use of force, fraud, or coercion says Fight Slavery Now, an anti-trafficking organization. They add:

“That is the essential element that defines the crime of human trafficking. Conditions are manipulated so that people become trapped in a web of sweat, fear, and deceit.”

The sort of thing that makes my blood boil – that people could treat their fellow human beings so despicably. I stewed over it in a blog shortly after the local arrests. And when Christmas arrived, I was pleasantly surprised and happy to receive the key necklace from my sister in-law, who is on the board of a faith-based anti-trafficking organization in Delaware.

What a very cool and thoughtful gift!

I don't usually wear much jewelry – but for a for an important cause, I will gladly wear it.

Now it is National Human Trafficking Awareness Day, January 11th, and I am looking at a map showing human trafficking trends in the United States on the website of anti-human trafficking organization, Polaris Project. 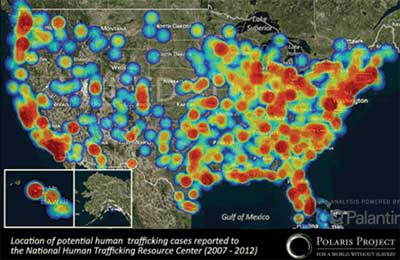 To my mind, this map resembles a weather map of unbearable summer heat...or, like a high-tech medical image of an unhealthy body for diagnosis of some dread ailment, it looks like a frightening disease spreading rampantly through the country, with red and orange hot spots dominating the other colors – especially on the coasts.

It looks uncomfortably hot in my neck of the woods: the Mid-Atlantic East Coast...and I do not handle intense heat very well!

Let me take a closer look...

The International Labour Organisation (ILO) estimated in 2012 that globally, nearly 21 million people are victims of forced labor across the world, trapped in jobs which they were coerced or deceived into and which they cannot leave.

More precisely, three out of every 1,000 people worldwide are trapped in jobs into which they were coerced or deceived and which they cannot leave.

Those numbers are bigger than the populations of many towns across America...!

The 2014 Global Report on Trafficking in Persons published by the United Nations Office on Drugs and Crime (UNODC) reveals that one in three known victims of human trafficking is a child – a 5 per cent increase compared to the 2007-2010 period.

Girls make up 2 out of every 3 child victims, and together with women, account for 70 per cent of overall trafficking victims worldwide.

How else is one to think about it?

Yury Fedotov, UNODC Executive Director has said in a press release that official data reported to UNODC by national authorities represents only what has been detected, which indicates that the scale of modern-day slavery is far worse.

“No country is immune – there are at least 152 countries of origin and 124 countries of destination affected by trafficking in persons, and over 510 trafficking flows criss-crossing the world.

Rich countries which no doubt include the United States of America.

What a dubious honor!

Trafficking Trends in the US

The Polaris Project in 2013 published its Human Trafficking Trends in the United States report (with that nifty map), which highlighted the revelation that pimp-controlled sex trafficking, domestic servitude are most frequently reported forms of sex and labor trafficking to NHTRC hotline – NHTRC being the National Human Trafficking Resource Center, operated by Polaris.

They reported that from December 7, 2007 to December 31, 2012 – the first five years of its operation, cases of human trafficking were reported in all 50 states and D.C.

Just like no country in the world is immune from human trafficking, no state in the US is either.

Trafficking trends in the US include:

And perhaps not a big surprise: the most densely populated states – California, Texas, Florida, New York, and Illinois, were also the five states with the highest number of reported trafficking cases.

Should I feel proud that the states in my region didn't make the top five list?!

My region being the Delmarva Peninsula, consisting of Delaware, Maryland, and Virginia. I say “my” because I have been living in two of the three states for over twenty years. And for all I know, trafficking may have been thriving in the area throughout the time I've resided here – or longer.

How do you find recent statistics on human trafficking in your state (or your family or friend's state of residence)?

Go to the National Human Resource Trafficking Center's (NHTRC) website to view trafficking data on your state of residence. Just select a state in the scroll-down menu box to the right of the page.

Or search the web for the nearest anti-trafficking organization in your region – they may have more trafficking information specific to your area, such as recent arrests, as well as community awareness meetings, projects to combat trafficking, and various services to aid those who've been rescued.

Be patient though: there's loads of information to plow through, and if you don't find something you're looking for, you can always email or call the organization whose website you're perusing.

I like my special key necklace a lot; I've been wearing it every day since I received it!

It's an excellent symbol for me to remember how fortunate I am to live in my own home – and to think about the countless women, men, and children who are living in utter misery and hopelessness because of ruthless, soul-less criminals seemingly happy to exploit vulnerable others for their own profit.

Deceived, coerced, trapped...held against their will.

And unable to leave.

I wouldn't doubt that the ones who can't go home dearly wish it were their captors who were the ones who couldn't go home. The ideal home for traffickers would be jail. They'd get a dose of their own medicine there, not being able to return to the comfort of their homes!

And I dare say no one would be more satisfied to hold the jail cell keys to lock up traffickers than those whom they've trapped and enslaved.

Can you imagine not being able to come home...?