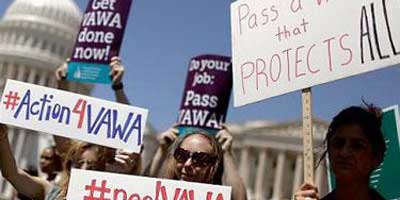 Activists rally in June 26, 2012 for the reauthorization of the Violence Against Women Act. Photo: Getty Images

The air has been awfully hot lately...

Summer has ended and yet, I am still being been mercilessly and relentlessly attacked since before the season officially began; first, by bloodsucking parasites in the form of deer ticks, brown ticks, mosquitoes, May flies, and goodness knows what other bloodsuckers, but secondly, I feel my values have been attacked by various politicians – also known as bloodsuckers.

Not all are bloodsuckers (I hope), but many.

Human or not, they all cause varying degrees of discomfort.

Sometimes it has been so bad that it has caused me sleepless nights. Either due the itch on top of my skin, or under my skin –  thanks to something unsavory someone said that I likely found offensive.

(Well, maybe not sleepless nights from an insensitive remark from a public figure, but enough to cause me not to fall asleep for hours!).

Topical ointments or other  medicines can allieviate  an itch from an insect, but not a feeling of irritation from a person. A feeling of unsettling discomfort.

The endless and relentless misogyny and disrespect for the female half of humanity from numerous, elected public officials, media personalities, and as well, those in society who accept it – either through electing them or not calling them out publicly.  Making and passing restrictive laws to limit women's own health choices, not passing laws to help domestic violence victims, calling women who dare to speak up on behalf of women – derogatory and sexist names or telling them they don't belong in the public sphere, among other things – it is all a slam against women and girls.

It is simply disrespectful.

I am not talking here about women in developing countries, whose lives I help share in  my work as Field Partners Manager and Editor at Safe World for Women. Their lives are certainly difficult enough, facing daily hardships such as war, profound poverty, lack of access to basic healthcare, education, and economic opportunities, and entrenched, harsh cultural and traditional discrimination against them, as well as expectations of where their place should be within their societies.

I am talking about women in the United States of America, the country that has recently been touted throughout the national conventions of the leading political parties.

I don't doubt the parties have valid reasons (and maybe not so good reasons) to call my country  “exceptional.” But I'll leave their platitudes to them – that is what they seem to do best.

Exceptional, according to various online dictionaries, includes as one of its meanings:

What could be considered somewhat exceptional is that this year, a number of women in one party took to the stage to warn women about the threat to their reproductive health rights and also their work rights (equal pay for equal work), if their candidate, our president, is not re-elected. Caroline Kennedy, daughter of President John F. Kennedy, said,

“As a Catholic woman, I take reproductive health seriously, and today, it is under attack. This year alone, more than a dozen states have passed more than 40 restrictions on women's access to reproductive health care. That's not the kind of future I want for my daughters or your daughters. Now isn't the time to roll back the rights we were winning when my father was president. Now is the time to move this country forward.”

What's not exceptional, is the vitrolic backlash some received from the opposite party, through social media, blogs, public speeches/commentary, etc.

Even less exceptional is the current state of women's well-being in the USA.

Work and Violence Against Women (VAW)

Recently,  RH Reality Check reporter Andrea Grimes decided to investigate the Texas-funded Women's Health Program (WHP), which excludes Planned Parenthood as a provider. Opponents of Planned Parenthood frequently claim that there are plenty of other places that Texas women enrolled in the WHP can get the same or better reproductive health care that they get at Planned Parenthood.

After six hours of phone calling, Grimes found that of 181 providers listed for the city of Austin by the Texas Department of Health & Human Services, only 13 clinics or doctors  take the Medicaid Women's Health Program. She added that,  “...by '13th clinic' I mean the one that was the very last viable option, in terms of being the farthest away. About half of the 13 clinics are reasonably accessible by public transport and/or less than, say, a $30 taxi ride or half-hour drive.”

Why the discrepancy, between the department's 181 listings and Grimes' investigation coming up with 13 clinics in the end?

She writes, “Because 92 of the state's listings are duplicates. Others are radiology associates and labs and pediatricians and even closed clinics. Others just plain don't take Medicaid. At all.”

Is this what makes America exceptional?

Can those who loudly sing praises of our liberty, individualism,  egalitarianism, and populism (the political doctrine that supports the rights and powers of the common people in their struggle with the privileged elite) also sing so loudly on the current status of American women?

Clear differences and clear choices; this is what our president and his rival offer to Americans. Both candidates and their supporters said so themselves.

However, neither candidate can afford to ignore women and the issues that concern them. After all, women make up half the population!

Each has tried to persuade the public of his vision of the future for a “strong America”.

As far as I can tell,  we can  be truly exceptional  only when women in America can freely make their own healthcare choices, have reliable access to basic reproductive healthcare,   no longer be at risk for preventable maternal deaths, be free to enquire about pay equity without fear of being punished, and be free to walk away from an unbearable domestic violence situation – knowing that their safety will be protected by the  justice system and society.

And that's just the tip of the iceberg, among many issues that affect women.

The future I want is clear in my mind and heart: it's one in which women, alongside men, are respected in every sense of the word.