Close encounter - in Danger in Rome 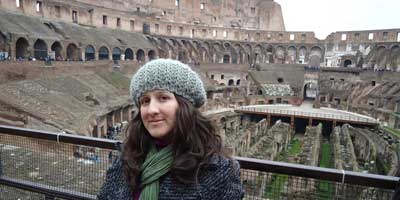 Fernanda Amaral is a Brazilian gender researcher with a master's degree in Sociology.
She is currently studying Gender, Identity and Citizenship in UCA-Cadiz, Spain.

I decided to have a short holiday and visit friends in Italy over Christmas.

Rome is a beautiful city that breathes history from every corner.

I'd had a perfect journey around other Italian cities. But now I had to catch my plane back to Spain.

My flight was at 6 am so I was advised to travel to the airport the evening before and sleep there.

By 9pm I was taking the train to get to Ciampino Airport, in Rome. But the train just let me at the Ciampino Train Station. Okay, no problem… there were buses and taxis near there.

I walked down the street and… not a single taxi, but a bus stop and I would be able to take the next bus - the last one.

Gradually the streets emptied. I was alone.

But I was calm and waiting for the bus.

As I did not talk Italian, he began talking in English with me.

“Wow, you are very pretty, you know?”

"I have a bedroom for you.. I want to make sex with you"

My mind was saying…”oh, come on…stop this.
I could be your daughter”.

I was getting a little bit nervous.

He started talking with someone on his cell phone in another language that was not Italian, English, Spanish or Portuguese. May be Arabic.

He insisted to me,

”Hey, do you like sex? I like it, very much.
The bus will not pass now…my house is near here and I have a bedroom for you, to take a rest in peace... I want to make sex with you.”

Okay, I was more nervous now!

No-one on the streets, no policemen, no taxis… nobody!

I just kept saying "no, no, no." I was very afraid

He invited me to drink coffee, and I said I did not like it.

He invited me to get in his car and said he could take me to know the city better. I said no!

He invited me to go to the dance club and I said I didn’t like it.

I was very afraid that he could have a gun and force me in… I wouldn't be able to stop him and I would not be the same for the rest of my life, if I could have a life, because I didn’t know what he would do with me: Rape me? Or traffick me????

I was scared and angry

I thought it best to try and engage him in some sort of conversation. I was so scared and so angry.

I started to tell him about my work as an activist and advocate for women’s rights. About human trafficking and violence against women.

I started to tell him about how horrible those kind of films are for women.

I was completely alone with that horrible man

Okay… I was very nervous and afraid now.

Nobody on the streets… no policemen, alone…

I was completely alone with that horrible man.

I was so scared and he said,

Okay, now I was totally frozen and very scared… but I could not let him know about it…

I had to keep myself strong and make him see I was in control of the situation. My heart was racing.

I thought if I stopped talking he would attack me

I just kept talking because I was afraid if I did not he would attack me.

He asked my name and age and I lied to both, of course.

He asked me where I was from… and of course I lied to him again, because I knew he would probably think that Latin American women have very intense sexual lives…

NO, it is a lie! We don’t live like this and we want respect!

I really wished I was an old woman, or had my hair cut or…I don’t know… why me?

I am an ordianary woman, not attractive, nothing… it was cold weather so I was wearing a lot of clothes… why me?

Why? Why can't men respect us?

Hated that, because I am a woman, I have to live with fear…

I wanted to cry but tears would not come

Finally, the bus came and I was inside it! I was safe, I thought to myself, I was safe!

I just could relax a little bit when I was at the section of “arrivals” from the airport, I wanted to cry but tears did not come…

Sometimes I’m very scared to be a woman…

I just want to come and go with respect and not be afraid of being a woman.

I don’t want to be desired at a bus station by an old man who thinks that women are made just to have sex with men.

If I have just one wish to be realised in my life, I would like every man to respect every woman.

My horrible experience in Rome left me stronger!

Now I can let my tears fall down, finally... I'm safe!  Safe and stronger