50 Years on: The Military Regime, Slaughter, and Torture in Brazil 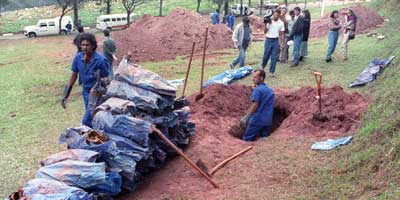 Ossadas de Perus: clandestine grave with 1,049 bodies dated from military regime. Most of those bodies were never identified.

This year, Brazil is remembering the 50 years since the military regime which began on 1st April 1964 and continued until 15th March 1985. The political scene here is that we are facing people who want those dangerous times back.

We have a movement here – including young people, who think that just the military can save the country and the “family” (heterosexual and Catholic). So, all of rest of us are fighting to keep the memories of all the citizens who were murdered by the regime, who were tortured, whose families were told they were “missing”.

In this piece, I want to show you and to keep on remembering some incredible women who lost their lives fighting for a real democracy – and, by the way, some reactionary people still say they were terrorists.

I write this now because of them, and in honour of their dreams!

“Brazil is a world economic power, but the country lags far behind its neighbors when it comes to examining its dark past. In Argentina, Chile, and Uruguay, hundreds of military officers have been convicted of human rights abuses that occurred during their so-called dirty wars.

In contrast, not a single Brazilian military officer was ever been charged for torture or assassination; they're protected by a 1979 amnesty law”.

Dilma Roussef captured by the military regime.The Brazilian President, Dilma Rouseff was herself victim of torture as described here:

“Her nom de guerre was Estela. Part of a shadowy urban guerrilla group at the time of her capture in 1970, she spent three years behind bars, where interrogators repeatedly tortured her with electric shocks to her feet and ears, and forced her into the pau de arara, or parrot’s perch, in which victims are suspended upside down naked, from a stick, with bound wrists and ankles.”

Some Women Murdered or “Missing”

One of the most famous cases is from the stylist Zuzu Angel. She was supporting the military side until they arrested her activist son, Stuart Angel Jones, tortured him, and threw his body into the ocean.

Zuzu discovered it all and was going to prove that with recordings and papers someone inside military gave her. She was persecuted when she was in her car, and died. Chico Buarque wrote a beautiful song called “Angelica”, in memory of her.

A short video of her story from a Brazilian movie can be viewed here.

She was studying biology when she began to be a political activist against the dictatorship. She had to live clandestinely under a nickname, Cristina.

The military found her and killed her, but according to official documents, she was “missing”.

Like all of these women mentioned here, she was political activist. When she was murdered, police went to her parent’s house to inform them about her death and to ask them to do nothing about the case, otherwise everyone would die.

Her body was never found, even when the Mayor of São Paulo, Luiza Erundina, asked in 1990 that all the 1.049 human body bones be identified in the clandestine grave in the cemetery called Cemiterio Dom Bosco, in Perus “village”.

The army said she died by one shot, but her exhumation by the mlitary regime said she was shot four times.

She was 17 years old when she was arrested. She was submitted to torture, naked in front of the policemen, abuses, and other bad treatment.

When she finally could get out from the place in which she was jailed, she began to suffer the consequences of her torture: time after time, she started to be blind, she cried and she laughed all the time, and became depressive – with a distant glance.

She was put in a clinic by her family, but her main torturer wanted to go to her room and again threatened her: if she did not stop with those “shits [or frills]” she would be back to that jail. Since that day, her family sent her to a asylum and she said that she used to see men on her room – always soldiers and men, and usually was saying that she would die. Her health grew worse and so she died.

Doctors said she died from “cerebral edema to be clarified”.

She was killed by a 100 shots in Araguaia.

Araguaia was a place in which some political dissidents were preparing a revolution to search for freedom for the country. A lot of women died there by army, most of them shot at until dead, by different soldiers that left their bodies unrecognizable.

She was the daughter of Japanese farmer immigrants, and died with 25 years of existence – three of them dedicated to find freedom.

She was murdered by the military in an action on the favela Morro da Congonha, em Madureira, Rio de Janeiro, when there was a conflict between police and traffickers.

The police killed Silva, but they did not help her…otherwise, they put her in the trunk of car, just like a suitcase…and they left that door not correctly locked.

As the car was leaving, her body fell to the ground in the street but part of her clothing was still trapped in the trunk. Her body was dragged along for 250 meters.

Her daughter said that the military version is not the correct one. Her mother was walking down the favela when she crossed the corner and found herself in front of the military. They shot at her twice - one shot was into her thorax. She recelled that her mother’s body had fallen from the car once and that the police put her inside the trunk again and continued towards the 'hospital'.“

Luiz Eduardo Rocha Paiva, a former secretary general of Brazil’s Army, said: “Was there torture during the military regime? Yes,” he said.

“Is there torture in Brazil today? Yes,” he added, referring to the deplorable conditions in some Brazilian prisons.” (Simon Romero, NY Times).

Leader’s Torture in the ’70s Stirs Ghosts in Brazil

Ossadas de Perus: clandestine grave with 1,049 bodies dated from military regime. Most of those bodies were never identified.

Thus Military Regime ended up in 1985, we still face some heritage of that time.

Recently we noticed that Military is going inside favelas [slums] from Rio, occupying it and entering in all the houses without asking “Sorry, may I came in?”. They use their guns to enter.

This is, again, the country of the World Cup.

That military group is said to have the fourth most violent actions/military operations in Rio de Janeiro in the last two years.

Two videos about the case (in English):