Remembering the Mothers of Srebrenica this Mother’s Day 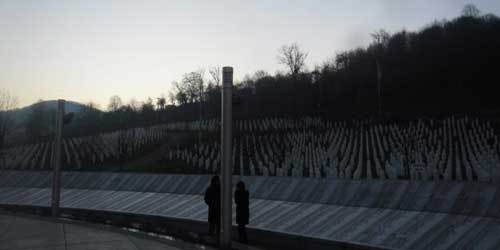 I keep remembering those two beautiful women I met who, despite suffering through something most people will never be able to comprehend or understand, still talk of love and peace rather than hate and violence...

These were the first words spoken to me by one of the two Mothers of Srebrenica I met when I travelled to Bosnia with the organisation Remembering Srebrenica in December last year. It was such a simple sentence but it had a profound impact upon me and I know that I shall never forget those words.

This sentence, made up of only 13 words, managed to convey not just the pain and grief of one woman who had been robbed of her family but the experience of thousands of others. It was her personal story but it echoed the testimonies of countless other women who lost their sons and husbands during the Srebrenica Genocide, which saw Serbian forces murder 8,373 Bosnian men and boys in July 1995. The reality for the Mothers of Srebrenica is that they are mothers without children, wives without husbands.

In the UK, as Mother’s Day has been drawing closer, I’ve been thinking about the Mothers of Srebrenica a lot this week. I keep remembering those two beautiful women I met who, despite suffering through something most people will never be able to comprehend or understand, still talk of love and peace rather than hate and violence. They have no desire for revenge, all they ask for is justice – yet this is still something they are having to fight for.

This is because the trial and prosecution of those responsible for the genocide has been slow; genocide denial is still common among some members of the Serbian community, and a lack of proper outreach work on the part of the Special Court for the Former Yugoslavia has meant that many of those who lost loved ones at Srebrenica do not feel like they are part of the criminal justice process. In addition, the moving of bodies from one mass grave to another has also made identification of whole remains difficult, if not completely impossible in some cases. This means that while mothers gave birth to whole babies, they are often only able to bury one or two bones.

The two Mothers of Srebrenica that I met with were very clear that they wanted the Srebrenica genocide to be remembered and I believe that this is only right.

Their suffering, their stories, and their children should not be forgotten by the people of Bosnia, nor by the international community. If we ignore the events that happened in July 1995 then the international community will once again be failing the Mothers of Srebrenica, their children and their husbands, by denying them justice. We will also continue to fail to learn the lessons of Srebrenica, which will guarantee that we allow similar events to happen in other areas of the world. Thus ensuring that more women will one day be introducing themselves by saying ‘I used to be a mother and I used to be a wife’.

Or perhaps it will be children, like the those currently living on their own in the Jungle in Calais, who will stand up and say ‘I used to be a son’ or ‘I used to be a daughter’.

So this Mother’s Day, aside from celebrating the wonderful woman that my mother is, I will also be thinking about the Mothers of Srebrenica. I will celebrate their courage, their resilience and their endless quest for justice. I will marvel at their strength, their forgiveness and their concern for others. And I will once again dedicate myself to learning the lessons of Srebrenica by challenging hate speech and by focusing on what unites us rather than what divides us, as I believe that is the best way to honour all those whose lives were changed forever by the genocide.

I hope that you will do the same.