Women and Democracy - then and now 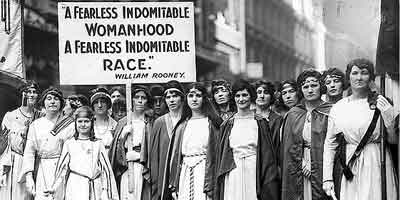 1869 – John Stuart Mill was the first person in Parliament to call for women’s right to vote.

This was followed by many years of women's campaigning.

19th September 1893 - New Zealand was the first country to give women the right to vote.

1910 - At the International Conference of Working Women in Copehagen, Clara Zetkin proposed the idea of an International Women’s Day, which was approved unanimously.

"Slavery abolition, establishment of schools, improvement of prisons… Probably none of these things would have been effected if women had not taken so strong an interest in them — if the men engaged had not found a constant stimulus in the feelings of the women connected with them, and a necessity for excusing themselves in the eyes of the women in every case of failure or shortcoming."
John Stuart Mill, UK - 1825

Plans were spread by word of mouth and in the press, with articles which analyzed the question of the equality of women in government and in society.

All articles emphasised the absolute necessity to make governments more democratic by including women.

Success of the first International Women’s Day exceeded all expectations, with street demonstrations of up to 30,000 women.

1913 – On the eve of World War I campaigning for peace, Russian women observed their first International Women's Day on the last Sunday in February.

International Women's Day was then transferred to 8 March.

1914 - women across Europe held rallies to campaign against the war and to express women's solidarity.

1917 - On the last Sunday of February, Russian women began a strike for "bread and peace" in response to the death over 2 million Russian soldiers in war.

The date the women's strike commenced was Sunday 23 February on the Julian calendar then in use in Russia. This day on the Gregorian calendar in use elsewhere was 8 March.

1975 – International Women’s Day was given official recognition by the United Nations and taken up by many governments as a national holiday.

Only one national parliament, Rwanda, has over 50% women in the ‘lower’ or ‘single house’.

No national parliament has as many as 50% women in the ‘upper house’ or ‘senate’.

The global average of women in parliament is 19%, the highest numbers being represented in Nordic countries.

Only 1 in 13 participants in peace negotiations since 1992 has been a woman.

Women have served as only 6% of negotiators to formalized peace talks and have never been appointed as chief mediators in UN talks.

Some 70 percent of the casualties in recent conflicts have been non-combatants — most of them women and children.

Women’s bodies have become part of the battleground for those who use terror as a tactic of war — they are raped, abducted, humiliated and made to undergo forced pregnancy, sexual abuse and slavery.

20% of the population of the industrialised countries account for 86% of the world's total consumption expenditure, while the poorest 20% in the world consume no more than 1.3%.

1.6 billion people in the world have no access to drinking water.

And yet, according to the UNDP, the world has the necessary resources and skills to eradicate poverty totally in less than one generation...

Reducing the debt of the most heavily indebted countries would cost between 0.5 and 7.5 billion – less than the cost of a Stealth bomber.

The current net wealth of the ten richest billionaires is 6 billion, more than twice the total national income of the least developed countries.

Women need to have an equal say in what happens next!

There will not be a safe world for women until there is true democracy for women.

There will not be true democracy for women until:

Women are equally represented in all governments.

Women are equally represented at the United Nations.

Women are equally represented in all peace processes.

Womon are equally represented in all decision-making processes.