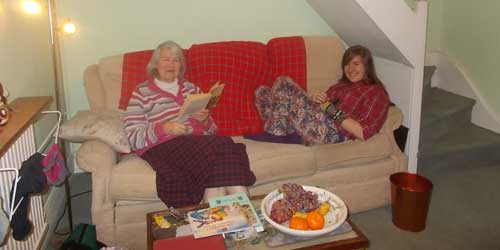 Our daughter, age 17, is of course also inevitably involved in caring for Mum. More times than we probably realise, we say to her, 'Please can you come and sit with Grandma'. And she does... But then she falls behind with homework and gets overtired...

When my mum's not staying with us, she lives in her own home with our son.

That is most of the week.

Carers come in three days a week, to take her out, bathe her, etc.

Mum is physically still very fit. She's mostly cheerful. And happy to do whatever she can for herself. In fact, she always seems to be more concerned about others than about herself - she's always been like that.

She sometimes gets confused about the time of day or the month.

She sometimes forgets whether my dad is still alive.

For someone who's never been a carer, it might be thought that actually there's not much involved in caring for her.

However, even on her best days it can feel exhausting to be with her, much as we all dearly love her.

And for a young person who, last year, was off around the country volunteering on organic farms and who loves an active outdoor life, I think it is especially exhausting.

Our son doesn't come under the definition of 'young carer' as he's over 18. Actually in a few weeks' time it's his 21st birthday.

On the 28th January, in the UK, it's 'Young Carers' Day' #YCAD.
The day is being publicised on Twitter by also using the hashtag #MissingOut. And with good reason.

Even trying to arrange for our son to be able to celebrate his 21st birthday is quite a feat of coordination. Or, as this last weekend, for him to go and see one of his favourite bands.

There are so many young carers, many much younger than our son. So many that it is not actually known how many there are, here in the UK. Our son is thankfully elligible for a benefit called 'Carer's Allowance'. However, younger carers are not formally registered as carers and it is only recently coming to light just how many there are, with growing awareness of the issue. Many miss out on adequate schooling, time to do homework, as well of course as time to 'be young'. And that is in the 'developed' world. I'd love to know more about young carers in the developing world, too.

Our daughter, age 17, is of course also inevitably involved in caring for Mum.

More times than we probably realise, we say to her at the weekends, 'Please can you come and sit with Grandma'. And she does. She's very good with Grandma and Grandma loves her company.

But then she falls behind with homework and gets overtired by Monday. Her school is very understanding.

You see, we also care for my father-in-law who has vascualar dementia. Carers are of course more expensive at weekends. Dad lives next-door to us. So at weekends we mostly look after both Mum and Dad here in our little home.

Because both parents are liable to get confused, there can be some personality clashes between them. More precisely, my mum can tire herself out by trying herself to help us care for my father-in-law, who is fourteen years older than her. As well as suffering confusion he also has severe arthritis. So Mum tries to help explain things to him as well as helping him to walk around, sit on his seat, etc. Dad takes the chance, if he can, to sit next to her on the sofa, which Mum is not keen on. Because Mum is also confused, the conversations can become interesting to say the least and, when we're in the right mood, quite funny.
As I say, there are some personality clashes - hence we often end up asking our daughter to come and sit with Mum.

The longterm plan is still for Mum to live in a 'granny-annex' next-door to us (on the other side to Dad!).
But inevitably there are delays.

Mum is in the early stages of Alzheimer's Disease.

She takes herself to bed, gets herself up (sometimes rather early), is mostly cheeful, very caring about others, and still her easy-going self. So it would perhaps be easy for someone to wonder why caring for her can be hard work.

But as our daughter just eloquently explained, conversation can start to feel very predictable and repetitive - which in itself is tiring, especially for a lively young mind. It can almost feel contagious at times. In a few words from our daughter, it can feel like 'Being dragged into their world'.