A Journey With Mum - Called Alzheimer's 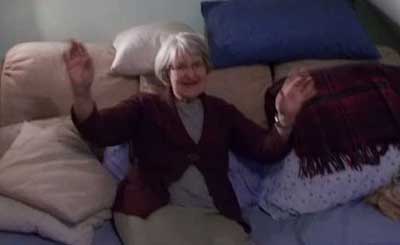 Mum giving her blessings to the world, a few days after her fall down our stairs.

"It's nice that we should all be friends, despite differences.
What we want to hear about, around the whole world, is similarities rather than differences.
And to appreciate the blue skies and pink clouds."

Mum has always been very supportive of our work and hugely open-minded.

For as long as I can remember, she has been oblivious to appearances and she has reinforced in me time and again not to care about what other people think. And likwise not to take sides...

Mum has always got names muddled up. She's never had what others would call 'dress sense'. She's always been great at telling nonsense stories, which enlivened and inspired our imaginary world as children. She's always been more like a friend.  Never 'good' at ordering us around like other mothers seemed to do with their children. We had a very carefree childhood. Looking back, I'm continuously surprised at how free we were (Dad was busy at work and not so involved in our upbringing).

It has been impossible to notice at what point she became 'different'. She has always been different and I have always been proud of that.

It is important to realise that 'mental health' problems often appear, not surprisingly, at major stressful stages in our lives. No-one knows what triggers Alzheimers but it seems that stressful events can mark a turning point in the progression.

Dad had a rare congenital disease, which meant that Mum was basically his carer for many decades, and she also cared for his mother who lived with us and passed away 13 years before my dad.

At the turn of the century, I had an alarming phonecall from my mum - saying that Dad had suffered a grand mal eplieptic fit, was rushed to hospital, and she had been told he had a very fast-growing brain tumour and would only survive another two weeks. As it turned out, the consultant had not heard of his rare condition [Neurofibrosis 2] and had misinterpreted a brain scan. The tumour was in fact slow-growing and had just touched on yet another major nerve. But my mum was clearly in shock.

Recently I found my notes from that time - I had to make notes as that was the only way of communicating with my dad because he was deaf. I spent every day in the hospital with him for the two weeks he was there, awaiting major brain surgery. I see that, even then, my mum was showing signs of confusion and tiredness - not surprisingly of course.

Following my dad's brain operation, my mum then had to drive him daily - for six weeks - a lengthy journey for radium treatment, which must have been incredibly exhausting.

Dad was left with a large visible dent in the left side of his forehead, where part of the skull had been removed - which meant he had to be especially careful not to fall or bang his head, as there was nothing protecting his brain.

He survived another eight years, but rapidly deteriorating, and my mum did miracles to cope and help him. I was living a couple of hours away with two young children (and I also had a stillbirth - another shock for my mum).

In the first few years after my dad passed away (in December 2008), Mum appeared to be enjoying the release from years of caring for someone with ongoing depression, which had been part of my dad's condition. Though she has never moved Dad's desk or its contents from the corner of her living room.

'Alarm bells' did ring for me when, on a retreat with her lovely friend Sheila Ward, Mum told me she had been asked if she'd had a test for Alzheimers. I guess that, if we'd pursued it at the time, we'd have been better able to plan for the future. But who wants to try persuading their mum to have a test for Alzheimers?

About a year ago, we started wondering how much longer Mum would be able to continue driving over to vist us each weekend, and that she was starting to forget where to find her purse and door-keys and to generally seem more insecure. I mentioned this in passing to her doctor. I hesitantly suggested to Mum that she could have a memory test. However, at that time, she could still remember the memory tests my dad was given, and she was fearful that her nerves would prevent her giving correct answers.

In December 2014, on Mum's weekly visit to us, she locked herself in the car, was trying to open her car door with her front door keys, etc. And then she phoned me to say that her brother and our daughter had appeared for breakfast. Her brother lives in Austria and our daughter had been here with us, so I was of course alarmed. I was visibly shakey with the shock. Over the last six months, I have grown used to such phonecalls.

At the same time, my mum's friend Sheila had become ill and stopped going to church, so my mum also stopped going (though she didn't explain it to me that way).

In January this year, Mum finally accepted the idea of having a memory test with her medical doctor. That then started to kick in the whole system, though it has taken several months (and an emergency) to get the system really in place.

Mum's doctor referred her to the mental health team, who diagnosed mum with mild cognitive problems.

On Valentines day this year, Mum's great friend Sheila Ward passed away. I took my mum to the very emotive funeral, which included a pre-recorded video speech from her friend Sheila.

For whatever reason, in April this year, Mum fell down our stairs. We called out the paramedics - i.e. we dialled 999 and called the ambulance. Nowadays, rightly or wrongly, the paramedics seem to be told not to refer someone to hospital unless totally vital (to be honest, we were relieved). However, the next day, Mum was immobile from her shock and bruises, in that she was unable to sit up to drink fluids or take painkillers, so we called the paramedics out again. The paramedics called out a local medical doctor here who is lovely. Luckily, we were also already in touch with our local carers here, because we look after my father-in-law. So they were able to send out carers at short notice.

Literally two days later, Mum was well enough for me to take her to the outpatients department of a local hospital for an X-ray which showed that, miraculously, no bones were broken.
On the way back, I took her to see the local medical doctor (at the insistance of the hospital staff) who was very reassuring and moreover, I was delighted to see that she had a large poster of the Medicine Buddha on her wall!

Incredibly, Mum is now very physically fit again. In fact, she doesn't remember having fallen down stairs at all!

I suppose I shouldn't be surprised at the diagnosis from the brain scan, which we received a couple of days ago... Alzheimers fits with Mum's symptoms. But I am surprised and shocked.

Mum's dad had several strokes (to the extent that he no longer recognised his family) so I was expecting at least a mild cerebral vascular problem to show on my mum's brain scan.

To be honest, I can't really imagine that there will come a day when she doesn't know who I am. I somehow hope to bring a positive aspect to the 'Alzheimers story'...

Nevertheless, whatever happens, I feel committed to Mum's future. And not in a dutiful way. More that 'we are one'. I find it impossible to separate myself from my mum and whatever she goes through.

We are currently submitting planning applications for a 'granny annex' for Mum. This won't be a major adjustment for us, as my husband Andrew is already the registered carer for his 93-year-old dad who lives next door to us on one side of our little cottage. So, in a way, having my mum on the other side won't be such a big change in our lives. And, in many ways, having Mum near will be a relief.

Really the bigger issue is how to help Mum before the granny annex is built.

Sheila Ward: Our Journey up to Now