Mothers and Children in Wartime - and the Long-term Impact 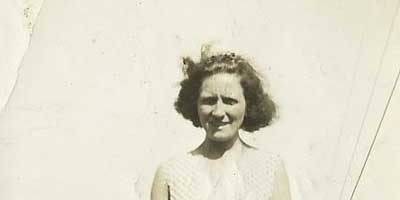 Talking almost daily with civilians in Yemen and, last summer, with civilians in Gaza, makes me also think more and more about what my own parents went through in London, as children. And also my grandparents.

Particularly my dad's family, who were in south-east London which suffered heavily from the 'blitz'.

Nana wit my dad (left) and his girl cousins

I really only heard snippets from my dad and his mum ('Nana') and now they are both gone - and my dad's dad died before I was born, so this is by no means a historical account. More just about the long-lasting effect of war, living with fear, and 'collatoral damage' - i.e. civilian casualties.

My dad didn't really talk about his childhood memories with any sense of fear that I could detect. But I know it was a terrifying time for his mum. I was close to my Nana especially as she lived with us for much of my young life. I was brought up to be terrified of war myself, with horror stories from Nana about hiding in the flimsy air-raid shelters with her small son - which led her to suffer a nervous breakdown (I think nowadays called Post-Traumatic Stress Disorder).

I still can't really imagine what they went through. So I did a google of wartime Blackheath - where my dad's family all lived.

I found an account of war memories written by a woman who was a child in Blackheath at the time:

"Wartime Blackheath, wartime London, wartime Britain — it was a different world. Born at the start of the Second World War, my memories from an early age are vivid, much to the surprise of parents and friends. Life in the War years was governed by bombs and barrage balloons, sirens and air raid shelters, queues and ration books. Strange, when you think about it, this was the only world that my generation and I knew.
Many l000s of people were bombed out of house and home in London, as in other big cities up and down the country. Whole families were made homeless. In London many took shelter down in the Underground. Some of the homeless became squatters trying to make a sort of home in bomb-damaged houses left empty by their owners, evacuated or killed..." Rosemary Radley WW2 People's War

However, the write-up then talks a lot about rationing, food scarcity, etc, before getting onto the subject of living under bombs.

This, I think, is why my dad didn't talk much about the actual bombing and the fear. It was the only world that his generation knew. Bombs, fear, death and destruction were a part of life. So, in a way, war children were perhaps equally preoccupied with whether they could have cakes. Certainly, while I remember Nana telling me the horror stories, I remember my dad talking about making aeroplane bombers out of paper, making knives out of shrapnel, queuing for cakes and playing in bomb craters - areas that had previously been houses suddenly became big play areas.

In fact, he seemed to remember the war with a nostalgia which seemed strange to me and still does. And so, as children, we grew up watching war movies which almost inevitably glamorised war.

That said, I guess that may have been Dad's way of 'processing' what he'd lived through. For the whole of his adult life, my dad suffered depression - partly due to a chronic illness but I can't help wondering how much of his depression was also inflicted by the war...

Rosemary Radley, in her published memories, also writes about the horrors and fear:

"War meant living with wailing sirens and the daily threat of bombs and doodlebugs...
The forbidding wail of the siren was always a dreaded sound: the signal to repair to the Morrison air raid shelter in the downstairs front room. A sigh of relief passed over everyone’s face when the All Clear went. Some people resorted to under the stairs, or down in the basement if they had one, for protection when the air raid siren went....
We had many air raids night and day. Apart from seeing a barrage balloon being raised skyward we never knew when — until the air raid siren sounded. One night we were woken up by the siren’s ever-ominous wail in that awful “minor key” to which we became accustomed. Ascending and descending, ascending and descending, on and on it went warning of imminent bombardment. Everyone was immediately filled with urgency and foreboding. Out of bed and down the stairs, gripped with fear, we huddled together in the Morrison shelter helplessly clutching our gas masks...
A doodlebug droned above, a recognisable deep chugging noise. Mummy assured me there was no need to worry so long as we could hear the drone: the time to fear was when or if the droning stopped! That meant the bomb’s engine had cut out whereupon the bomb would fall on whatever happened to be below. We could only wait and go on waiting, hoping for the best. Silence can be beautiful or it can be ominous. The silence of waiting for the doodlebug either to cut out and fall, or continue droning and pass over was an uneasy moment. Was this, perhaps, the one to fall on us! Who could tell until the waning of the drone meant the bomb had passed. Not us this time! It was with mixed emotions that we heard its horrendous impact with earth elsewhere. From the sound of the bang the doodlebug must have fallen quite close by....
What relief to hear the high-pitched note of the “All Clear” sounding out through the still, dark night. Normal life resumed, if anything during the War could be described as normal! Normal to me." Rosemary Radley WW2 People's War

I think of my friends in Yemen and other wartorn countries. We have never met in person. But now, with the internet, all war is personal and we do not need to meet people in person to feel close to them.

Moreover, talking with my friends living in war zones has also made me think more about what my dad and Nana went through, and also the impact that their experiences had on me as a young person, though I was born on 2nd September 1961, exactly 16 years after the end of the war.

I live in hope that, with the increasing number of global friendships, the world will soon wake up to the real horrors of war. Children will no longer grow up feeling that war is 'normal' and we can begin the generations of healing which are so desperately needed.

WW2 People's War is an online archive of wartime memories contributed by members of the public and gathered by the BBC. The archive can be found at bbc.co.uk/ww2peopleswar

Also Read: Generations at War - When Will the Healing Begin?