The Digital Divide - Does it Matter? 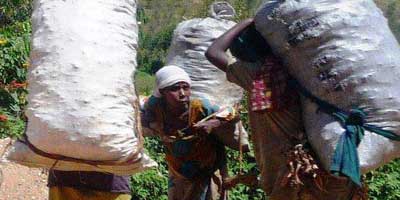 Culture or poverty? These Congolese women have no chance of accessing the internet. We help to give them a voice throughout the world. Photo: COFAPRI ©

A report last September by the UNESCO Broadband Commission Working Group on Broadband and Gender indicates that online gender disparity is at its largest in developing countries, where only 29 percent of women are connected, compared to 33 percent of men.

The same study revealed that, worldwide, 200 million more men than women are online. The researchers believe that number could jump to 350 million, if no action is taken.

"More than twenty years after the birth of the Internet, two-thirds of the planet's population still do not have regular access to the Internet, and a greater proportion of these unconnected global citizens are women."
UNESCO report 2013

The U.N. study quotes a World Bank estimate that every 10 percent increase in broadband access results in 1.38 percent gross domestic product growth in developing countries. Based on this estimate, bringing 600 million additional women and girls online could boost global GDP by as much as $18 billion.

(At this point, I could start a long diatribe about the GDP as a measurement of economic growth and human worth...! - To keep this blog shortish, please see What's Wrong With Market Economies and GDP - Hazel Henderson)

In developing countries, there is a 16 percent gender gap in internet access, compared to 2 percent in developed nations.

Hostility Towards Women on the Internet - Subtle and Not-so-subtle

The gender gap is due to various factors: chiefly a combination of cultural and economic. It is suggested that, even in 'developed' countries, many women are deterred from using the internet due to online harassment. And in some cultures, women are discouraged or forbidden from using the internet. In other words, there is a difference between the 'access gap' and the 'use gap'. Lack of access to the internet is due to poverty. Lack of useage (when there is access) is due to cultural factors and online harassment ('more subtle hostility toward female Internet users').

'It's no secret that online communities can be hostile places for women. Wikipedia's gender gap is notoriously large, so much so that there is now a concerted effort afoot among American colleges and universities to add more female-centered content to the online encyclopedia. Sexism is also notorious in the online gaming community. And the tech community is still considered by many to be a boys club, where bad behavior is common.'

I do want to hear more women's voices on air, and read on our websites issues that we don't generally talk about...
"I think you'd agree that there is no fair representation of women and women's issues anywhere in the media. It's something that I'm always concerned about."
Liliane Landor, BBC.

Here in the UK, Guardian research shows that the media is overwhelmingly male dominated.

The Guardian study showed that average percentage of female reporters was 22.6% - compared to 77.4% of males - in part of the study logging the sex of reporters in a range of national publications and also the reporters and guests of the Today programme.

It's not just the media.

The Fawcett Society has found that, in the UK:

'..men outnumber women 4 to 1 in Parliament (Women make up 22 % of MPs), of 22 Cabinet Ministers, just 4 are women. The business world also remains largely run by men, with only 17% of FTSE 100 directorships held by women. When we turn to the media world, only a dismal 5% of all editors are women and within the legal system, just 13.6% of the senior judiciary are women.'

Those are the reasons I set up our organisation, back in 2008.

I didn't google the statistics at the time. But I intuitively felt that women's voices were missing - and especially grassroots women's voices. And I believe that, as women, intuition is one of our strong points!

On the 2nd July last year, I was at the United Nations in Geneva, receiving a Katerva Award from the president of UNESCO.

This year, on the 3rd July (my daughter's birthday), I will be at Covent Garden in London because Safe World for Women has been short-listed by the prestigous internet organisation, Nominet, for an award for 'Doing Good Online'.

It is interesting to look through the other finalists - all of course doing incredible work.

The answer, I would assume, is that we are incredibly fortunate that my husband is as passionate as I am about our vision. And is also passionate about IT and website design. And, as many women's organisations will know, funding is scarce. Hence we appear to be the only women's organisation shortlisted for a Nominet internet award. We are in the fortunate position of having women and men throughout the world who are willing to contribute their skills to furthering women's empowerment.

I like to believe that the best birthday present I can give to my daughter is to be trying to help create a safe world for women - and for us all.

And hopefully the Nominet recognition will help to achieve this.

How You Can Help

If you are on Twitter, you can help show your support for women's empowerment, and reduce the digital divide, by sending out a tweet that includes @safeworld4women and #nia2014

If Safe World for Women can win an award at the Nominet presentations, I believe it will be a major step forwards for the women's movement - and for us all.

Also read: What do we want for our daughters?

'...for an industry challenged by skills shortages and changing its current gender bias, building a new vision for the potential of the tech sector is vital if we are truly to see Britain become a centre of global technology innovation. The Nominet Internet Awards have become the standard bearer for our potential in a world focused on the negative implications of the web.

'We aim to profile innovative examples of organisations, individuals and businesses trying to use the internet as a force for good across a wide range of categories, from innovative internet businesses, through to those involved in online skills and training, internet safety, social philanthropy and applying digital innovation to public services.

'...We hope that the awards will continue to provide a showcase for British ingenuity in digital innovation, a field often dominated by global giants.

'...The Nominet Internet Awards serve as a source of inspiration to new generations of internet leaders and innovators, and help set the bar for digital creativity.'