Generations at War - When Will the Healing Begin? 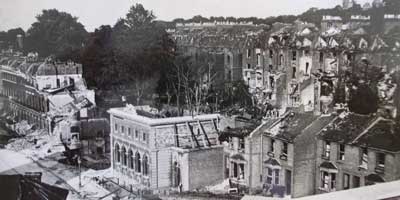 Greenwich, London, in the blitz. My dad's childhood was spent in Blackheath, Greenwhich. Photo: The Greenwhich Phantom

I just watched a powerful and informative video trailer to a film: 'What's in the Heart'.

The video talks about the poor health status of Native Americans, the concept of 'inherited trauma', and explains how today's poverty and dispair on the reservations needs to be looked at in a deeper historical context.

The film traces the life of a 14-year old Lakota boy who survived the 1890 Wounded Knee Massacre, often described as one of the worst massacres ever. The boy went on to forge a life based on forgiving “those who had done that to him.” Including interviews with the boy's great-grandson, this powerful film explores one community's attempts to heal from its past and deal with the onset of reservation life.

My own family - Dad and Nana

It made me think of the war stories of my parents and grand-parents, and wonder how this affected me as a child, and how it affects me now.

Greenwhich Station & Railway Embankment. Photo: The Greenwhich PhantomAt the time of the second world war, my dad was living in south-east London, where bombs were part of life.

He told me of what sounded like enchanting memories - playing in bomb craters, making paper war-planes and using shards of plasterboard from bombed-out houses for something creative - I thnk it was making little knives.

He thought it amusing that his local cinema was obliterated by a bomb, and all was left was a sign, 'Gone With the Wind'. I guess children will find ways to play and laugh, whatever their environment.

I remember our own happy family occasions - sitting watching a war film on television, or even a musical about the second world war.  On other family occasions we watched comedy shows about the war. And family board games relating to the war.

I remember being bought little models of war-planes which I spent ages putting together and painting, to my dad's delight. Other times it was a lunar module or a toy car. To me, as a child, there seemed no difference.

This was when my Dad was at his happiest. Whereas much of the time he suffered from severe depression.

She was a very emotional, exciteable strong-willed woman from a close-knit London Cockney family. The family lived together in a terraced house - grandparents, aunts, uncles and cousins.

Nana would recount heartrending stories to me, of neighbours whose houses were blown to pieces, of a man whose wife died in a bomb blast, who day by day grew more bent and more miserable when she saw him walking past.

And of hours spent in the bomb shelter. Family and neighbours would sit together, gas masks at the ready. Nana clinging tightly to my dad, her only child.

Nana couldn't bear the thought of her son being evacuated without her, so she went with him to relations in Manchester.

My dad thought of his mum as being clingy and neurotic and denying him happiness as a child. And he seemed envious of the children who were evacuated without their parents. For the rest of my Nana's life, her son's relationship with her was - at best - tense.

Grandad in army uniformOn my mother's side of the family there was a different experience of war. My maternal grandfather (Grandad) had been in the trenches on the front line, in the first world war. He wrote about it afterwards. He was essentially a pacifist, and said he used to aim above people's heads. The whole family were pacifists and hadn't entirely approved of him going to war at all.

In the second world war, Grandad was an air-raid warden in north London. He had developed a very fatalistic attitude. Though flying bombs were dropping around their north London home, they had no air-raid shelter and the children slept in their beds every night. My mum says she was never scared, and attributes that to her parents' relaxed attitude.

I remember Grandad as a sweet, mild-mannered, religious man - a vegetarian, who seemed accepting of whatever life presented him with.

Though he had already been through one war and not expected to return home. So perhaps to an extent he was hardened to war.

My mum's uncle was shot down flying over France in a Lancaster Bomber, when she was young child. She had been very fond of him. He was living in her parents' home and she remembers him saying goodbye when he went off to war. He was reported missing shortly afterwards. A few months later, they received news from someone in France saying that they had found his body and given him a Christian burial in a village graveyard a few miles outside Paris. They sent a photograph of the memorial cross they erected.

However, his mother and my mum's mother expressed no interest in where his body was. His own mother was a pacifist and had been deeply upset that he had gone to war.

He was rarely mentioned by the family while I was a child.

When his mother died of a heart attack, many years later, she was found to be huddled over the letters he had sent.

I just share all this by way of illustration. I don't know the effect all this had on me. But it's bound to have some effect.

I was born twenty years after the second world war. I spent my first two and a half years in that same terraced house in Blackheath, where my dad's family - parents, grandparents, aunts, uncles, cousins, had lived.

I did grow up with a sort of acceptance about war. A feeling that every few years there's a war, so there wasn't much point me working hard at my studies or planning for the future.

I also had a fatalistic and despondent attitude to relationships, which led me to two disastrous marriages.

It wasn't until after the therapy and healing that I was able to find a fulfilling relationship.

My memories and my families' memories are of wars fought seventy years ago.

The brutal massacre of the natives at Wounded Knee happened 122 years ago.

But wars, and the culture of violence, continue.

I tried to protect my son from the influence of conflict. We lived in a peaceful environment in rural Ireland, with no television, internet or computer. He caught snippets of news but believed that wars happened in other places. Until that was, at the age of five, by now living in England, he saw big army helicopters flying low over our valley. At that moment he realised that we too have an army which looked like it was ready for war, and therefore we have enemies.

He developed a severe phobia which lasted several months. I had to take him out of school and teach him at home. He wouldn't go outside or even have any windows open.

After a few outings to more peaceful environments, he grew out of his phobia and developed his own ways of dealing with it. He wanted to learn as much as possible about war and the history of war. He devoured Horrible History magazines, history publications for chilren which were popular at the time. And, as with many boys, he later turned war into a form of play, with computer games.

For my grandparents generation the First World War was said to be the 'War to end all wars'. Of course this was far from the truth. Wars in one form or another continue to haunt people all over the world.

And often the cycle of violence passes down from generation to generation. Inherited wounds continuing across time.

Kitty Farmer's excellent film speaks of how these wounds, stretching back 122 years, live on.

Every family has its own stories and inherited memories and traumas.

We need to look deeply at the roots.

And there needs to be an acknowledgement that wounds carried across generations need addressing and healing.

'What's in the Heart' is produced by Kitty Farmer and Watersong Productions in collaboration with the Medicine Wheel Foundation.