'I am not there; I did not die' - Testimony to my Baby 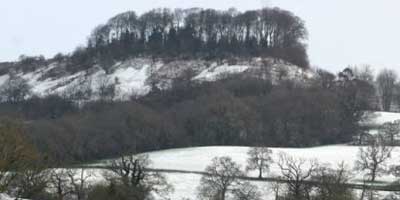 'I am not there; I did not die' - Testimony to my Baby

When I walked up Dumpdon Hill in Devon, I didn't know how or what I was going to feel.

Eight years earlier, I had toiled up the same hill with my two small children, to scatter their baby brother's ashes amidst the bluebells and primroses.

On that first visit, I had not felt overwhelmed with sadness. In a very strange way, I had felt a sort of liberation and lightness.

Re-tracing my steps now, I wondered if actually I'd been in shock and numb to any real sense of feeling.

Of course I had been in shock, without a doubt. Years of therapy, meditation and retreats followed, in between divorce, trying to make ends meet, fighting homelessness, debts, and holding our lives together.

Dumpdon Castle, where baby Roderik's ashes were scattered, is an ancient Iron Age Hill Fort, steeped in mystery, magic and local legends. There is a timelessness where life and death seem to meet. I felt acutely aware of the lives that had come and gone - and yet not gone.

Even now, all that could come to me, on the high wind-swept hill, were Mary Frye's words. The words on the invitation cards to Roderik's memorial service all those years ago. And, looking down for miles in every direction, there was again a sense of freedom. The same feeling as I had at the time. There was a surge of energy and a feeling of being at one with the world which I could see around me, and the world beyond. None of the darkness and terror normally associated with death. How can a baby bring anything else but love?

The feelings were, if anything, even stronger. And I had a glimpse of how Roderik's short life could have changed mine so profoundly - which it surely did.

I think that anyone who has experienced a tragedy will perhaps understand the strange feeling of letting go which can follow heartbreak and trauma. When something terrible happens, fear sorts of melt away, at least for a while. And, if fear goes, if not even death is so dark and scary, then what follows is a sort of liberation.

It is a fine line. Lack of fear can lead to reckless behaviour, detachment, and even suicidal feelings. However, when you have children to keep going for, there is a strong motivation to move forwards. For me, experiencing birth and death so close together brought a mind-blowing awakening to the preciousness of life, the importance of every moment, and an acceptance that some things are way beyond our control.

Our Common Destiny - The Ultimate Taboo

Death is the one thing that we all have in common. Death touches us all. Just today, I met a woman whose husband had died the previous week from cancer. And also a woman whose sister had set up SANDS, the Stillbirth and Neonatal Death Charity.

One thing that struck me deeply with Roderik's death (and life) is just how many people, even here in the 'western world', have experienced the death of a child. And that we have all, in one way or another, experienced death. Yet it is not the sort of subject one brings up in conversation, so it is not talked about. Of course in countries without accessible health-care, child death is tragically far more common. I remember reading in the Dalai Lama's autobiography that six of his siblings died in infancy. And, to him, this did not seem especially unusual or remarkable.

Years before Roderik's short life, I came across the 'Tibetan Book of Living and Dying'. It was written by a Tibetan teacher who worked in a hospice, and one of his main points was that how, here in the 'developed world', we don't talk about death. And yet death is our one common experience, for ourselves and our loved ones.

Sogyal Rinpoche is of course right. We don't often talk about death. We have few words of comfort for the bereaved, and in fact we have few words. We find death embarrassing. We prefer to avoid the subject. Yet death puts life into its true perspective. It challenges us to wake up and really live.

There is no doubt that Roderik has changed my priorities.

I was not exactly 'materialistic' to start with. My first child was born by candlelight, when I was living a very simplistic lifestyle, close to nature in a caravan without electricity, telephone, or car. I managed to avoid the computer and the internet for as long as I could.

By the time Roderik came along nine years later, I was living a more civilised lifestyle. He was born (and died) in hospital. And yet, I am sure that Roderik came to change something for me. Perhaps his message is for me to have the courage to say what I think - which is that we have got our priorities wrong. And moreover that we, as women, intrinsically know this. Whether we have children who have died or not, whether we have had children or not, we intrinsically feel a sense of responsibility to the world, to children, and to the future.

We know that babies are full of potential. Our babies are not born murderers, criminals, or torturers. So what happens? What goes wrong? Why do we end up fighting each other, taking resources from each other, using more than we really need, and committing atrocities?

If people ask me why I'm doing what I'm doing, there is no concrete answer. Nothing tangible. And yet, I have no doubt that it is because of Roderik.

I find it draining to spend time analysing and writing about it. Though once a year, on the anniversary of Roderik's little life, I sometimes feel driven to do so.

I have an overwhelming feeling that our lives are significant; that however futile life may seem, everything we do is important. If there is one message that Roderik brought to me, it is that we are all human and we share a common destiny - death, and therefore life and - potentially - enjoyment of life. And I refuse believe that enjoyment depends upon us being cruel to each other. On the contrary, our enjoyment increases when others are happy.

But in our pursuit of the enjoyment of life, we destroy it, for ourselves as well as for others. And that is what can seem futile. I believe that, as women, we know this; we can't dispute it. And many men too of course.

Though men, by nature, don't necessarily have the same sense of responsibility towards life. Even before a baby is born and acknowledged, the mother has spent nearly a year with it. When a baby is born, we go through sometimes unimaginable pain. Without modern health-care, giving birth is still a life-threatening process, for ourselves as well as our babies. I really don't know whether I would be alive if it wasn't for modern intervention. So, for women, love, sex, death and new life are intrinsically and naturally interlinked.

Women - especially 'economically disempowered women' - are often so busy rearing new life that we have little say in the future of our children, or the future of the world they live in, or to talk about this important interelationship between life, death, sex, love and happiness.

In order to have a say, we have to enter a 'man's world'. Our ostracism starts with the most natural act of all - feeding our babies, which tends to be seen as something obscene and overtly sexual. Although breast-feeding now has 'official' acceptance in countries such as the UK, we are still a long way from motherhood being accepted as part of - or even remotely relevant to, the corporate and political world. Motherhood - creating and nurturing the next generation - is one of the most important roles in the world, but still has little or no 'status' anywhere.

Bottom of the status rung is a bereaved mother who has lost her child. And it can seem a very lonely and isolating experience. If your business has failed, you can at least talk about it.  There is something quantifiable - the hours and money you invested which you have lost. But where love and death are concerned, the subject is avoided. Death - and specifically death of a child, is a very humbling experience. In a profoundly obsure way, it can be a positive experience - for it eliminates any semblence of pride and it brings a sense of true perspective. It can bring an immense compassion for others, and it also challenges you to develop your inner strength.

As women, we know we are all connected, dependant on each other. Whatever we do affects others, in a way which also affects ourselves - for we feel the pain of others. This connection is love. Yet the language of love is still avoided.

I strongly believe that more women need to have a voice, not as women in a 'man's world', but as mothers and nurturers of future generations. It feels like I am stating the obvious - and yet the obvious seems far from happening. But perhaps if Roderik came for a reason, it is to give me the courage to say this. I know enough to realise that there are many men who feel the same way, and who would welcome women's voices. Change is happening, but not fast enough.

Typically, Mary Frye did not write her poem for notoriety, but to comfort. Her words were not published or copyrighted, and the origins of her words were not confirmed until her death in September 2004, six months after Roderk's birth. However, the popularity of the poem gives me the courage to say more than I otherwise would - and emphasises to me that there is something we all share which, if only we could talk about it, would make life a better experience for us all.

*In 1932, Mary Frye - a Baltimore housewife, wrote these lines on 'a brown paper shopping bag' to comfort a young German Jewish friend who was staying with her and her husband.  Later she said that the words “just came to her” and expressed what she felt about life and death.

The friend, Margaret Schwarzkopf, had been anxious about her mother, who was ill in Germany, but she had been warned not to return home because of increasing anti-Semitic unrest. When her mother died, the heartbroken young woman told Mary Frye that she never had the chance to “stand by my mother’s grave and shed a tear”.

For several decades, the origin of the poem was uncertain. In 1996 A 1996 the Bookworm poll named it "the Nation’s Favourite Poem” in the UK.

In 1998, a newspaper columnist - Abigail Van Buren, researched the source of the poem and, on Mary Frye's death in 2004, the UK Times confirmed that she was the original author.

"The verse... became popular, crossing national boundaries for use on bereavement cards and at funerals regardless of race, religion or social status".

Wikipedia - 'Do Not Stand at My Grave and Weep'
Lapidarium
Carlwattsartist.com
Dumpdon Hill Fort