A new year, and another few thousand dollars goes up in smoke 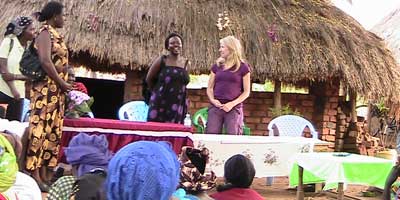 Chris visiting a women's group in Uganda in 2009

When I signed out of Facebook early on New Year's Day, I watched a little of the new year's celebrations on television.

What I saw was extravaganza. Vastly expensive fireworks displays, as if cities throughout the world were competing to show off their affluence. Which we all know is a farce.

I'm all for celebration. But I absolutely cannot enjoy watching millions of dollars going up with a bang, when I spend every day trying to raise funds for people who struggle for a dollar.

The New Year's fireworks displays epitomised to me the flamboyant and blinkered attitude of those who enjoy reminding us that we need to 'tighten our belts'.

So are we really poorer?

The economic crisis is not acutally due to lack of money. The money hasn't actually 'gone'. But, as non-economists, that's what we're supposed to think... Sorry kids, there's not much money left, you'll have to spend less. We'll have to cut your pocket-money. Leave the grown-ups to sort out the problems. Don't worry - we'll give you a treat from time to time, like some pretty fireworks which will impress the neighbours.

But the obvious is staring us in the face. The lack of money is due to a gross-mismanagement of the global economy, which is down to a huge lack of cooperation and coordination by those who are entrusted with policy-making and responsibility for the economy.

I'm no economist, but I know there is something wrong when I visit families in Uganda who live next to a swamp and sleep together on one mat because they can't afford a dollar for another mat. For whom a mosquito net is out of the question because they have no bed or mattress to tuck it into.

I know there is something wrong when I visit a small town in a poverty-stricken area of Uganda and find that the NGOs there, and the United Nations, do not know of a local group (of 150+ women) which has been there for over 25 years, working very effectively but in need of funding.

I know there is something wrong when I talk to a UN project manager in Kampala, and he tells me how - in another African country - he had previously been responsible for returning several hundred thousand dollars back to source at the UN because it was impossible to identify a grassroots group who could effectively implement a project at a local level. He wasn't convinced that such groups didn't exist - just that local, regional knowledge was very limited and that the decision-makers seemed to be out-of-touch with the grass-roots.

At the same time, small but effective grass-roots organisations struggle to access funding.

Here at Safe World, we recently helped one of our Field Partners to submit an application form for funding to implement a project to educate their local community about the attrocities of child sacrifice. Who better to implement such projects? Who better to make such grassroots changes, than a local group? But these groups often have to jump through hoops to get funding, especially those in the more remote, rural areas.

What is economic growth?

So long as measurement of wealth takes no account of social benefit, then how can anything change?

I don't have the answers - but the questions need to be asked. And to continue to be asked until we find solutions.

I certainly believe that one step forwards is to involve more women in politics and economics.

In 2008, a New Scientist article reported on research from Cambridge University which claims that more women in the stock market would stabilise the economy. And why? It goes back to the theory that women inherently have a more cooperative nature. That testosterone causes a competitive attitude ('agression and reckless decision-making'). I'm not saying that competition is always detremental. But balance is healthy. And at the moment we do not have a balance between competition and cooperation, nor between male and female influence and participation.

Moreover, the article continues by explaining that the resulting stress of such competition can lead to shrinkage of the parts of the brain associated with decision-making and factual memory, and a condition called 'learned helplessness', in which peole feel that their actions in risky situations don't matter.

The study goes on to conclude that if more women were trading, the markets would be more stable.

Is there perhaps also a difference in women's motivation for trading?

Here in the UK, and very likely elsewhere, women are more likely than men to be involved with a socially orientated start-up.

Social enterprises are businesses that trade in the market with a social purpose. A University of Northampton factsheet reports on a Government survey from 2005 to 2007, in which it was estimated that social enterprises in the UK contributed at least £24bn to the economy.

So not only are women less likely to take uncalculated risks in money-management, but they are also more likely to have a social objective at heart.

A similar difference in attitude between the sexes is found with respect to home and family.

In January last year, Viviana A. Zelizer wrote in the Wall Street Journal on 'The Gender of Money'.

Microloan companies find that women not only repay loans more often than men, but that when women control the money, their families were more likely to benefit from the income.

A study in the Philippines reported that when women have control over a couple’s savings accounts, expenditures shift towards the purchase of family-targeted durable goods.

Haitian authorities distributed food vouchers only to women in the aftermath of the devastating earthquake. They said the food would be more likely to be divided equitably within the household this way than if men got the vouchers.

And, in the US, Sociologist Catherine Kenney found that in low- to moderate-income two-parent households, children are less likely to experience food insecurity when their parents’ pooled income is controlled by their mother rather than their father.

Women are more likely to use income to help sustain their families.

Why, then, is this fact not recognised, used and valued?

I would suggest the reason we don't value women's contribution - and social enterprise - lies in the way that economic growth is measured. Namely the infamous and universally-used GNP (Gross National Product) and the GDP (Gross Domestic Product), which measure the total value of all the goods and services that are exchanged for money.

Russian American economist, Simon Guznets, who is often attributed with creating the GDP, warned in his first report to the U.S. Congress back in 1934 that “the welfare of a nation can scarcely be inferred from a measure of national income.”

Guznets clearly stated not to use GDP as a gauge of well-being of the nation or any indicator of the health of the economy.

He never saw it GNP/GDP as an overall scorecard of a country’s progress.

Because we assign no value to our natural capital, we actually count its depreciation as gain, like a factory owner selling off his machinery and counting it as profit.

What are the alternatives?

Dr Hazel Henderson has written and lectured extensively on the subject, and co-authored a paper 'Qualitative Growth' with physicist Fritjof Capra. Dr Henderson, and many others, recommend an overhaul of GDP to include statistics on health, education, poverty gaps and environment. Dr Henderson explains that the GNP/GDP money-measured index came into full use during World War II as a way to measure war production, adding up all the production of tanks, airplanes, automobiles and all the other goods and services exchanged in a nation’s cash economy.

'Today in most industrial economies, services have grown faster than goods – and statisticians are constantly revising GDP components to account for our evolving societies and technologies. But since GDP only includes money-measured production, these national scorecards ignore many of the social and environmental costs of production – as do corporations. Economic textbooks refer to these costs borne by society and future generations as “externalities” which could be omitted or “externalized” from company balance sheets – and therefore from GDP as well'...

Following economics textbooks, GDP still sets at zero the value of vital ecological assets: clean air, water and biodiversity, as well as the value of healthy, productive citizens and their unpaid work (raising children, maintaining households, caring for the sick and elderly, serving as volunteers, etc.) which accounts for some 50% of all production, even in industrial societies."

"Some economists have joined the critics of GDP such as Joseph Stiglitz and psychologist Daniel Kahneman (both winners of the Bank of Sweden Prize. Many call for creation of asset accounts in GDP to carry valuable public infrastructure investments (road, airports, colleges, hospitals) at their true value. This would balance the public debts incurred for their creation. Since such assets are ignored in GDP, this overstates countries’ indebtedness and raises interest rates on their sovereign bonds. Likewise, GDP treats education as a cost, instead of basic investment.

When we intentionally blind ourselves to all those “externalities” they create ticking time bombs of risk which mathematician Nassim Taleb describes as 'Black Swans.'"

The tide is turning. On 8 June 2011, the European Parliament adopted its 'Resolution on GDP and Beyond: Measuring progress in a changing world.' By and large, the resolution supports the actions proposed by the European Commission and stresses the need to develop clear and measurable indicators for measuring medium- and long-term economic and social progress.

Am I missing something?

As I say, I'm not an economist.

But do we need to be economists to know there is something fundamentally wrong with the system?

To know that the global economy needs to be better coordinated, involving more cooperation and dialogue? (remembering the studies which show that women are better at cooperating!).

To know that economic growth shouldn't be measured purely in terms of products and services which are exchanged for money, taking no account of natural assets and unpaid productivity and services, and writing off the social and environmental costs?

To know that - when there is no gender balance in economics and politics - the world will suffer for it?

I refuse to believe that the financial resources of the world are so depleted that it's not possible to direct sufficient funding towards existing grassroots groups who work to empower women and children.

Groups which already have the knowledge, experience and integrity to significantly improve the economies of their communities, their countries, and the world. Particlularly if social progress is taken into account in the measurement of economic growth.

Or is there some complexity which I'm missing?