"Women are the heart of the world...
and the heart is bleeding." Woman from DR Congo.

It is significant that the failure of the climate change summit was attributed to an outstanding lack of cooperation between world leaders, mostly men.

Women continue to be under-represented in decision-making. We are poorly-represented at major summits: such as peace talks, health care, the environment and at the Davos World Economic Forum.

Women are better at cooperating. 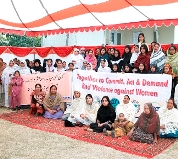 and a more central role than men in a successful society, by focusing more on cooperating than competing."

These were the conclusions reached by university studies in Ediburgh and Switzerland.

“There is no policy more effective in promoting development, health and education than the empowerment of women and girls. And I would venture that no policy is more important in preventing conflict, or in achieving reconciliation after a conflict has ended," said Kofi Annan, Former UN Secretary-General.

Most war victims are women and children. Every fighter is a mother's son (or daughter).

Let's try something new - Let's give women a chance

Ghandhi said: "Our armaments have failed already. Let us now be in search of something new; let us try the force of love"

We say: 'Let's try something new. Let's give women a chance.'

Rwanda's parliament is the world's first where women hold a majority -- 56 percent, including the speaker's chair

Rwanda has banished archaic patriarchal laws that are still enforced in many African societies, and women are driving the economy. Bills have been passed aimed at ending domestic violence and child abuse.

"In Rwanda, the women with high education and job say ‘our country is helping us to enjoy our rights and no man can beat us; and if he does we report to the police and he is put behind the bars'.

Women are favored by their government. This is due to the fact that in Rwanda, gender is an issue that is given priority. Indeed, the police in this country are truly protecting women, which is not the case in the DR Congo and Burundi where once the husband has decided, no one else in the family can speak.

Some women I interviewed from Rwanda declared that in case they were beaten, they would retaliate in their way for self-defence or report violence to Gender Based Violence Departments. This is quite understandable in a country where human rights are respected because their country is truly defending women’s rights. This can be explained by the fact that the genocide of 1994 swept most of men and today 53% of its population are females."

Conversely, in Burundi, a woman expressed to Bahati a typical attitude:
'I must not quit my household after he has beaten me, it is a very difficult thing I can ever do. There is nothing easy about it, I know that no woman will envy you today and in fact, many women and men will fault me for such a decision not to leave the home just as many more will fault me if I leave.'"

Bahati is from DR Congo and now lives in Rwanda with her husband Mugisho.

Mozamique's woman prime minister was ranked as one of the top leaders in the world.

Luisa Diogo was prime minister of Mozambique for 6 years, until January 2010.

She urged African health ministers to offer reproductive & sexual health services free of charge throughout the continent. Her focus on gender equality and women's empowerment led her to launch the "Network of Women Ministers and Parliamentarians (MUNIPA)."

An excess of cortisol (stress hormone) can then lead to a condition called "learned helplessness," in which people feel that their actions in risky situations don't matter.

Iceland leads the way at ending the 'Age of Testosterone'

"Once you break past the glass ceiling and have more than one third of female politicians," says Halldórsdóttir, the Icelandic politician who first proposed the ban on strip clubs there, "something changes. Feminist energy seems to permeate everything."

Guðrún Jónsdóttir, an organisation based in Reykjavik that campaigns against sexual violence, says the ban could mean the death of the sex industry. "Last year we passed a law against the purchase of sex, recently introduced an action plan on trafficking of women, and now we have shut down the strip clubs."

Janice Raymond, a director of Coalition Against Trafficking in Women, hopes that all sex industry profiteers feel the same way, and believes the new law will pave the way for governments in other countries to follow suit. "What a victory, not only for the Icelanders but for everyone worldwide who repudiates the sexual exploitation of women," she says.

Jónsdóttir is confident that the law will create a change in attitudes towards women. "I guess the men of Iceland will just have to get used to the idea that women are not for sale."

Together, we can ensure that the most oppressed are listened to by those with the most influence.

The silent majority can have a voice.

A sustainable and humane world with compassion at its heart