From Pakistan to the Philippines - My Prayers Are With You 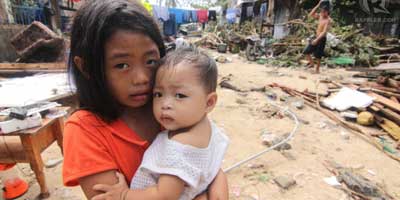 It was Friday dawn: no one was prepared for what would come next. Some were getting ready for their offices, some were still in their deep sleep. Kids were on the way to their school while mothers were busy in their housework.

It is accepted truth and no one can refute and snub the natural phenomenon... in a jiffy, a brawny typhoon advanced towards the Philippines.

In a minute, the roads epitomized the picture of the sea; cars, automobiles, buses, and vans revealed the depiction of whirling fishes. Infrastructure and communication networks were wiped out. Over 600,000 people were dislodged and displaced. An estimated 10,000 have lost their lives in a distasteful episode of Typhoon Yolanda.

While looking at to the news, I was stunned and was thinking about the life before the death of those men, women, and children in the strongest typhoon on record. For a second, my heart stopped beating and continuously sensed the presence there. I don’t know how many men, women and children will be under the debris and mud, how many still alive.

My brothers and sisters: I am helpless, I can’t hear your parched voices. I am hundreds of kilometers away from you, but my engrossment, my prayers are with you.

I know people have to ask for patience as the unprecedented scale of damage made by the typhoon is addressed. The locals have to be arriving at for help. The foreign NGOs have to reached for their assistance. I was very shocked when reading a newspaper that the people there have shown some violent actions because they are hungry, they are thirsty, they have no dwelling – and not because they want to hurt others.

In addition, a total of 80 provinces in the Philippines have been affected by the typhoon up to now. More than 35 providences have been left without electricity and no communication system. The person sitting in an air-conditioned room can’t envisage the conditions there.

What type of life will be there if a person doesn’t find water for drinking, food for eating, and a home for living? What will be the conditions there if there people are buried under massive graves of debris?

The clear picture of this extent of devastation and horror can be seen from high regions or from the helicopter than he will apprehend that there are no structures standing there. The local disaster risk and reduction management council alone is not adequate to cope from this huge devastation. Thousands of rescue teams have yet deployed to some specific disaster zones, but they are still inadequate in numbers.

Although the Philippine government has been offered assistance by some countries like United States that she will tender aircraft and search and rescue teams, while on other hand, the UN also extends its aid in the form of food, tents and relief supplies, and as well, the UK with sum of 2.5 to 4 million pound, still this amount is insufficient for the upturn.

The south Asian counties – mostly India, Pakistan, Bangladesh, oil-rich countries, and European countries should widen their aid and help her out from this huge desolation.

We, the canvasser and aficionado of peace, we the members of the Safe World for Women community should also raise our voices through print and electronic media so as we encourage donations of funds from individuals.

Our individual donations can help rebuild the fallen structures back and will make a gigantic and mammoth difference that can bring back the smiles on their faces.

How to Help the Survivors of Yolanda

To donate to the Philippine Red Cross: