The Power of Women in Culture to Create a Better Future 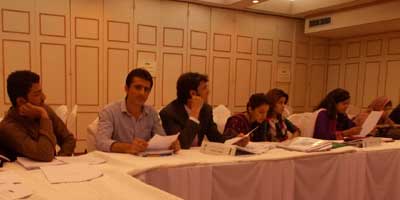 Originally published by 'Ibtidah - The Beginning'

Culture and civilization represent a multi-faceted phenomena which define knowledge, belief, art, tradition, morals, and laws acquired by an individual as a member of society. They are the pattern of life through which the particular community or group repeatedly practice the normal activities and social arrangement of life.

Through culture, the individual can express his or her emotions and can make their own judgments on the norms defining cultural imperatives. In short, culture is the scaffold and skeleton of philosophy of ideas, attitudes, significant codes, values, languages, and a way of life.

More than 6.5 billion people live in the world; the greater split among them is in Asia, which makes a 2/3 share of the total followed by Africa, Europe, South and North America. It is quite a tricky job to know the exact number of cultures of the world. It is because the breakdown of a particular culture needs an in-depth study, analysis, and immense endeavour to cover all characteristics, which is time-consuming to understand this phenomena.

However, we can scrutinize any culture through their language divergences that are more likely to uphold culture differences. Linguists estimate that the total number of the world’s languages is about five to six thousand, which are spoken around the world, but it is also a known fact that every five years, more than 100 languages are disappearing from the world.

Every country has its own culture and tradition that defines its social, economic, and political limitations, experienced from the past, set for the present and applied for future upkeep. 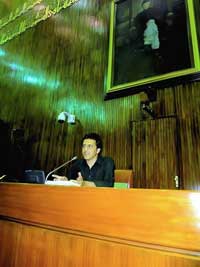 Saleem Khan at the Senate, upper house of parliament, presiding the chair of house on behalf of the Youth Parliament of Pakistan.Take for example, Pakistan; Pakistani culture is very different due to its Islamic panorama, rich historical milieu, national and regional languages, rich literature, etc. Pakistani culture can be linked with Islamic civilization like faith in oneness of God, Prophet Hazrat Muhammad (PBUH) their prophet, believe in egalitarianism, brotherhood and social integrity.

The terrain of Pakistan is divided into four provinces and the Federally Administered Tribal Area (FATA), and every region has its own native language such as Pastho, Panjabi, Sindhi, Balochi,Sarahki, Potohari, Kalasha, Punjabi, Hindko, Barohi, and many more besides; however, the national language is Urdu which is understood and spoken in all parts of the country.

The country's rich literary tradition has placed Pakistan at the top among existing nations of the world. The land has produced countless eminent and famous literary figures like writers, poets, scholar, philosophers, and intellectuals.

Apart from the above stated characteristics, Pakistani culture is still male-dominated.

The equality between men and women remains a dream of tomorrow; in Pakistani culture, women are the honour and seraph of the house, and they remain restricted from coming out from the home in many areas. Various factors are behind casting out women from their rights, like cultural, traditional, religious, social, economic, and political causes, which are region-specific.

Pakistan is a patriarchal society, and feudal and tribal cultures still exist that do not allow women to come out from their home and contribute in social or political activities.

Women are still deprived of their social rights; the education of women is considered a sin which remains a daydream of tomorrow. They have no permission for education from family members. Injecting the message of Islam – is falsely interpreted to say that it doesn’t allow women to came out from the homes, but actually, they forget that Islam is the name of equality and [Islam] believes in equal opportunity of both men and women.

The lack of understanding of Islam and rigid vision of the individual has created a male-dominated society.

Women are killed in the name honour. Girls are forced to marry to a man of 75 years through Watta Satta or Wani to settle scores between families in dispute. When sisters sit together, they always praise their brothers and when brothers sit together, they sell their sisters and daughters. The child-like sister of 13 or 14 who has dream in her eyes to do something for her family and society is wed to a man of 75 years.

The Constitution of Pakistan

“There shall be no discrimination on the basis of sex alone”, in the same way that in article 19 of the constitution has sanctioned the freedom of speech and expression of every citizen – for both men and women of the country.

Article 34 especially address the the participation of women in every field of life like men:

“The state shall ensure the participation of women in every walk of life of the national life”, but very wretchedly, there is no true carrying out of constitutional laws – rather, two different concepts still exist in Pakistani society.

Women who speak against the inequality, cruelty, and discrimination are treated as inferior and unacceptable. Such a woman is looked down upon as an infant of her family and society for either complaining or for being “too liberal” or “shameless” by disclosing the realities that speak about gender discrimination.

The women who silently bear all the injustices, domestic violence, and don’t speak for their rights – those women are praised for being women of high character, a pride for the family. They became the honour for their father and get respect from their husbands who label them, “The Real Women”.

So, to create a better future for women and to bring them out from within the four walls of their houses as prisoners, their basic rights should be protected. Women should be given equal opportunities in education like men have.

A preclusion for societal traditions abusing women should involve equality in the economic sector; instigating economic programs for the economic freedom of women should be given reasonable proportion to women in jobs through carrying out more programs for the participation of women in the political arena, electoral process, and effective participation in legislation so that they can legislate for the protection of their rights.

The above stated privileges and civil liberties will be accomplished by improving the role of the media, a continued struggle by civil societies, by effective awareness about educating women, and by highlighting their grievances to make Pakistan a place where everyone will enjoy and fulfil and build their potential to make tomorrow's dream possible.