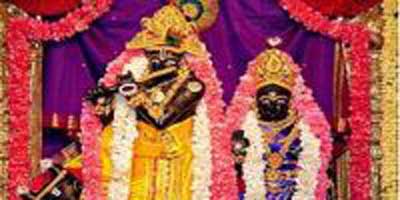 When I am called a feminist, I do not know, how to react. Probably, I would prefer being called a humanist. This, because, I think, being classified a s a human being sounds far better, than being classified on the basis of one's genital composition. (There are of course, other reasons as well). So, for some of these I would  rather call myself a "Vanilla Humanist". (Certainly, not interested in ice-cream flavours; while the former word gives the reader a clear indication of my sexual leanings in the realm of feminism, the latter term releases me from the clutches of the 'feminist' fetters).

So, then, making peace with the same, I say I am a vanilla humanist, who believes that women must be given their fair share and dues, better standards of life and existence, and of course, sexuality. For the purpose, Feminists, the world over have used various means and symbols, and some of these make use of the Indian Goddesses as well. (The "Abused Goddesses" campaign in India, to condemn domestic violence) There has, all of a sudden been a huge hue and cry over the usage of these Goddesses. While of course, some women do not find it real, others think it better to reject the goddesses and consider the sluts as more plausible forms of symbolism for the same. I do not , of course, reject their points of view, since everyone has a right to theirs, and yet, at the same time I think on my terms. And I feel, if I do not accept any classification at all...if, I reject any symbolism for fear of being deified, then , being slutty is being deified too... though (talking about sex trafficking per se) then, I think, I fall in the category of not a vanilla feminist, but a sex radical.

No, I do not think, that more than half of the male populace thinks only sex about women, but, I do doubt, whether bringing in sluts as victims of violence, would actually create a flutter of sympathy in the hearts of those sadists, johns, prostitution buffs (including forms of media) who thrive on the systems of human trafficking(?) Whether, this would not pull in a greater customer stream, that believes that sluts "deserve what they get"...or would this,  tell our sex radical friends to start imagining that pornography, prostitution, media pimping are not sites of celebration, freedom or adventure?

These religious symbols indicate how innocent (read naive) domesticated, dependent women have been physically violated, day in and day out. The claim, for the inclusion of REAL woman is certainly, not misplaced, since an identification with divinity does not come easy. But, I think, as feminists/humanists, we are certainly missing out on some important points:

1)      The inclusion of Goddess symbolism aiming at the domesticated and battered women, does NOT exclude the independent (prostituted) woman: I am using these words from a more sex radical perspective.

2)      It aims to awaken the more heightened religious sensibility of the Indian masses( who are, ironically, at large, more religious, and less spiritual) so that they connect the missing links in the chain.

3)      The usage of these symbols are,  spoken against, as feminists(my category) are in bed with the conservative religious groups. In India it would , more appropriately, be called , "Collusion with the Right Wing." (Where chanting of mantras, tantamount to not having a normal sexual life: though of course, India is witnessing how, the Godmen are up against the sanctity Godliness)

This is Wrong. If, we do understand the concepts of intellect, images, mental associations or even plain interpretation, would it be so difficult for us to get at the deeper meaning? Would it be so difficult to understand " what's in a name?" (here, the images?) Of course, the Right Wing association is blatantly wrong( feminism and Indian feminism has ever since, used this crutch to give the issue a wrong direction) Will the intellectual, elitist or even the educated class fail to grasp the obvious message, that this symbolism need not be taken in a hypocritical(or even hypercritical) and outwardly fashion, but is designed to force the spirit out of the sensual slumber. To quite an extent (Only, if the more educated class is willing to grasp it, because domestic violence and rapes take place in even the uber sophisticated and rich houses , in India) it could/would act as a philosophical method to curb the heightened infliction of tortures and gang-rapes as symbols of power and control. For, those, less educated and/or illiterate , who perpetuate these crimes amongst women, these images might act as sort of picturised Moralities. I am even reminded, of the calendar "Jaisi karni, Waisi bharni", (As you sow, so shall you reap) printed in India, years back. Our elders tell us, that the calendar had mortifying pictures of sinners being punished in various categories of the Hindu hell, according to the sins they had committed. Maybe, this is how one dissuades the more innocent minds and weans them off the crime breast (since the milk of corrupt sexuality is more easily available now, thanks to technology  and sex radicalism, where  images of control and derogation are only a mobile click away) As we discuss things, let us not build castles in the air and let us not forget the basic grassroots. Although human trafficking is a cancer in its last stages, poverty inflicts some of the bigger wounds, both sexually and otherwise. Some questions remain:

Why identify women with Goddesses?....why not identify the Goddesses with women? Maybe then one sees, how divinity is a throbbing soul in each one life...maybe then, the women understand that each one of them has a flicker of the divine within her, and that she can fight back... maybe then, they know, that the battered Goddesses are not symbols of powerlessness , but an incitement to the guiltless identification of self power and its embrace, that they are Shakti...maybe then,  the next time you go to worship the goddesses, you will not be able to rape a woman on your way back home. I understand it is not easy, but handling feminism and its seriousness has never been easy. Handling a lot of energy has never been easy.  Maybe, this is not impossible...keep the symbolism intact...maybe...