What Am I Doing for Sahar Gul? 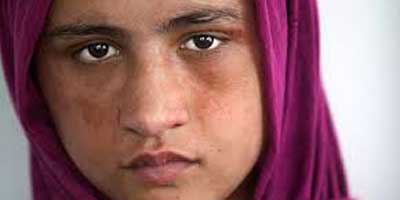 You may call yourself a feminist, or you may simply identify with the women’s movement, or you might believe that the peace and prosperity of nations is predicated on the empowerment of all citizens – men and women – and leave it at that.  But no matter which of these beliefs best describes you, there should be one question burning in your mind right now - what am I doing for Sahar Gul?

Sahar Gul is the Afghan teenager who was sold into an early marriage and tortured almost to the point of death by her in-laws when she was rescued by the police and taken to hospital in December 2011.  How can we ever forget the images of this courageous young girl being admitted to hospital so badly beaten she was unable to walk.

We should all know her story.  Like too many Afghan girls, Sahar Gul was sold to an older man offering money for a child bride. Despite the fact that marriage before the age of 16 is illegal in Afghanistan, Sahar’s new husband, completely unknown to her, took her to live with his family.

In the house of her in-laws, Sahar cooked and cleaned but resisted the advances of her new husband and was beaten and raped as a result.  In an act of remarkable courage, she told a neighbor and the police forced her husband to sign a letter promising not to mistreat her.  But the beatings continued and took a darker turn.  Sahar was kept tied up in a basement toilet with little to eat and regular beatings by several members of the family that can only be described as torture.  She endured this for six months.

When Sahar’s uncle, stepbrother and two policemen finally rescued her she was barely conscious.  Despite her condition, she was able to describe what had happened to her and the police arrested her mother-in-law, father-in-law and sister-in-law.  Sahar’s husband and his brother escaped.

The world watched with a mixture of horror and hope as Sahar’s physical wounds healed in hospital and as she demanded her in-laws be punished for what they did to her.  A visit from the Afghan President elevated her case.  In another act of extraordinary courage, five months after she was admitted to hospital, Sahar appeared in court to testify against her in-laws during their trial.  The judge declared all three guilty and sentenced them to jail for ten years.  Her husband and brother-in-law were found guilty in absentia.

When asked why they tortured Sahar, the family responded that they had paid good money for her but that she had not worked or produced any children to justify their expense.

During 2012, Sahar continued to recover in a Kabul shelter run by Women for Afghan Women and was highly critical of the verdict in an interview with CNN reporter Nick Paton Walsh expressing a deep fear of remaining in Afghanistan and her desire to become either a judge or a doctor – perhaps because these are the only two categories of adults who had ever protected her.

Fast forward to July 2013.  Sahar’s physical injuries have healed but her fight for justice is not over.  Her husband and brother-in-law are still on the run and just a few weeks ago her in-laws were released after serving just one year of their ten-year sentences.  Although Sahar’s lawyer has appealed the release, a new law that would make it unlawful for Sahar to testify against her in-laws is making its way through the Afghan Parliament.  Should it succeed, Sahar’s case would be extremely difficult to prosecute.  Sahar now fears for her life and for her future. At this point in time it appears that justice for Sahar Gul was fleeting.

Sahar’s story is the story of Afghan women.

With almost every aspect of their freedom curtailed from birth and too many forced to endure extreme levels and methods of violence often at the hands of their own families, the women and girls of Afghanistan fight for their humanity every day. Too often treated as commodities and as instruments to generate value for others, despite the gains of recent years the future for the women of Afghanistan is by no means certain.

Should the Taliban return to power after the withdrawal of US troops next year, the women of Afghanistan will suffer catastrophically and women everywhere will feel the aftershock.  Make no mistake, the Taliban and the ideology they preach is a threat to women everywhere.  Afghan women are in the frontlines of what amounts to a war on women and the global ambitions of the Taliban ideology mean that women everywhere need to pay attention.

It is a sobering fact that the considerable and hard won gains of the women’s movement in the 1960s and 1970s are today enjoyed by a minority of women in a handful of countries. Most women in the world still suffer intolerable discrimination, violence, illhealth and lack of access to money and power with the greatest concentrations of disempowered women in South Asia, Sub-Saharan Africa and the Middle East.

Women’s movements everywhere need to join forces to support women in these regions in their struggle for liberation and the urgency of the situation in Afghanistan means that over the next 12 months there needs to be an unprecedented focus on women and girls there.

In 2010, Secretary Clinton promised the women of Afghanistan that we would not abandon them, that we would stand with them always. The time has come to honor that commitment.  We must not sit idly by as Afghanistan’s women are left completely vulnerable and exposed to another round of Taliban oppression.

So what can you do for Sahar Gul and for the women of Afghanistan?

For Sahar Gul, contact your elected representatives and tell them that you are deeply concerned about the release of her attackers and that you oppose the proposed Afghan law that would make most cases of domestic violence impossible to prosecute. Send a message of support to Sahar’s lawyer, Kimberley Motley at and sign her petition “Justice for Sahar Gul”  at change.org. Support Sahar’s continued accommodation and education by contacting Manizha Naderi at , the organization currently taking care of her in Kabul.

For the women of Afghanistan, write to the UN Secretary-General and ask for his support for a special UN force to be stationed in Afghanistan to ensure that women’s rights are protected during the withdrawal of US troops and for a time after. Write to the US President, Senators Kirsten Gilllibrand and Kay Hagan from the Senate Armed Services Committee and Senators Barbara Boxer and Jeanne Shaheen from the Senate Foreign Relations Committee and ask them to do everything within their respective powers to honor Secretary Clinton’s commitment not to abandon the women of Afghanistan.

And every time you read a story in the media about the withdrawl of US troops from Afghanistan that does not mention the particular vulnerability of women, write a letter to the editor and contact the journalist and ask why.  If you are already a member of an organization dedicated to advancing women, convene your group to discuss what you will do to support the women of Afghanistan at this difficult time and ask your donors to do more to strengthen the organizations that represent Afghan women and girls.

If we can mobiilze women’s movements everywhere to stand together to protect and support the women of Afghanistan so that they continue to advance as full and equal citizens in a democracy where girls like Sahar Gul can become judges and doctors rather than child brides, we will have kept not only the promise of Secetary Clinton but we will have laid the foundations for lasting peace and prosperity in Afghanistan.

Ms. Leith Greenslade is Co-Chair of Child Health at the MDG Health Alliance which works to accelerate global progress towards Millennium Development Goal 4: saving 4 million children’s lives by 2015.   The Alliance operates in support of Every Woman, Every Child, an unprecedented movement spearheaded by the United Nations’ Secretary-General to intensify global action to improve the health of women and children.

Ms Greenslade is an investor in several non-profit organizations, including Tostan, Women for Afghan Women, the Somaly Mom Foundation and the Jewish Women’s Foundation of New York, where she co-chairs Isha Koach, a giving circle that invests in women social entrepreneurs who serve the world’s most vulnerable women and children.

Ms Greenslade served as Policy Advisor and Speechwriter to the Deputy Prime Minister of Australia and Minister for Health, and subsequently as Economic Adviser to the Leader of the Opposition and as Chief of Staff to the Shadow Minister for Social Security and the Status of Women. She holds a Masters in Public Administration from the Harvard Kennedy School, a Masters in Business Administration from the Chinese University of Hong Kong and a First Class Honors Degree from the University of Queensland.

She is the recipient of a Harvard Kennedy Fellowship, Hong Kong Financial Women’s Association Scholarship and University Medal. Ms. Greenslade lives in New York City with her three daughters and is a passionate advocate for the advancement of women and children.