What Feminism Means to Me 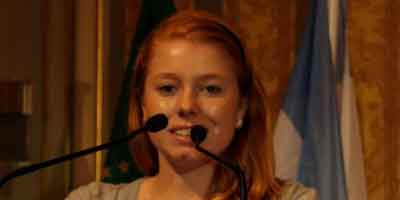 Claire Poyser speaking at the G(irls)20 Summit in 2011 - Australia.

Feminism is a relatively new concept for me - I’m only 20.

During my childhood, I had no idea that girls and boys were different. I went to a local primary school that valued and stimulated both male and female students, and I attended a single sex secondary school, where I was educated to an incredibly high standard. My parents have always displayed equality in our home, with both of them doing equal shares of housework and drop offs, and my brother and I being given equal opportunities in everything we do.

However, in my later secondary school years and the first year of my arts degree, I became particularly interested in human rights and international relations. I was selected as the Australian delegate to attend the 2011 G(irls)20 Summit in Paris.* The preparatory reading and research I did for the summit, as well as my experiences listening to speakers and participating in workshops at the summit, revealed glaring inequalities, prejudices and injustices experienced by girls and women all over the world: the pay gap, a lack of education and sanitation, forced marriage, lack of medical care during childbirth and gender based violence – just to name a few. We wrote a communiqué to the leaders of the G20, imploring them to act on these issues. We outlined how the marginalisation of girls and women in a society leads to economic stagnation and a lack of social cohesion.

It was naïve of me to think of this as a uniquely ‘developing world’ problem. In a less noticeable way, there are inequalities and injustices experienced daily by Australian women, which require the attention of the entire nation. There is currently a pay gap of around 17%, meaning that Australian women earn 83c to every dollar a man earns, and the cost of childcare, coupled with inflexible working arrangements means that some women are prevented from gaining employment. Meanwhile, female victim blaming and sexism in our media is rife. I have recently started writing for Safe World for Women, and have addressed some of these Australian issues such as the victim blaming by the media during the Jill Meagher case and the inadequate laws that have seen a trend in the advertising of ‘virgin’ sex workers.

Feminism to me means an awareness and respect of my rights, the opportunity to pursue my goals and a feeling that I am supported by those I care about (family and friends) and empowered and encouraged by those that I am in the care of (the government and their officials, my university). To me, feminism does not mean being going around braless with unshaven legs while hating men. It signifies equality, freedom of choice and opportunity for every girl and woman.

*Modelled on the G20 conference of the world’s wealthiest 20 states, however delegates to the conference are females between 18 and 20 years of age. This year’s conference will be held in Russia.