Lynch mob mentality can get anybody killed 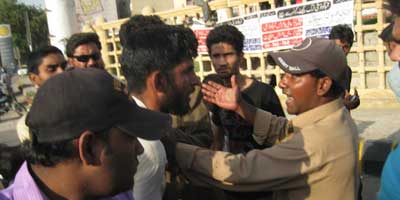 Whoever stopped and got a chance to get near, beat him. Photo: Andaleeb Rizvi.

Lynch mob mentality can get anybody killed

A regular day on the streets of Karachi…

An unfortunate man was beaten by a mob of 100 people in front of North Nazimabad Board Office Park. The man was accused of trying to snatch a mobile and money from a man at gunpoint. The incident sheds light on not only the ‘lynch mob culture’ prevalent in Pakistan – Sialkot incident – but also the utter failure of law enforcers. 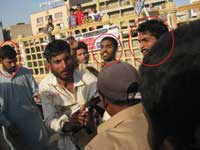 The three men marked in red are the main aggressors. Photo: Andaleeb Rizvi.While the situation kept escalating and the victim started bleeding, two Rangers who were busy snap checking motorcyclists disappeared. Later two policemen on a motorcycle arrived at the scene, only to leave within a few minutes, without even attempting to disperse the violent crowd.

There were at least 4 or 5 rickshaws present around the crowd and several motorcycles. I was shoved around by the crowd and told to go away, as it is not a place for women. It seemed it was a free for all, since whoever stopped, gave the man a few slaps and kicks. The victim kept yelling he had done nothing wrong and can be checked there is not phone or gun on him.

On questioning the aggressor, I was informed that the man stole a mobile phone at gunpoint, however, when he was asked to produce the mobile and pistol the victim carried, the aggressor had nothing to say. On being told they had no right to beat the man the aggressors started screaming, refusing to call police and said that law enforcers are useless in curbing crime, “we have no choice but to take law in our own hands”. Police does nothing but let culprits roam around free. They also intimidated the Daily Times driver and asked him to go away.

The aggressor kept changing his statement; first he said that the man was stealing mobiles in the bus. Another guy intervened at that moment and said that they were both travelling in the rickshaw, not the bus. So the aggressor changed his statement and said he was in the rickshaw with his wife and brother. A call was made to 15 to ask for police assistance, who did not arrive for the next 15 minutes, during which time some other men took the victim across the road, while the original aggressors stayed around me intimidating me with screaming and loud explanations. Told the guy wearing blue shalwar kameez to stop shouting, and they still had no right to beat the man so brutally.

Asked the aggressor to show his ID card, but he refused and sat in the rickshaw, while a guy in khaki t-shirt asked us to leave, as the man has been allowed to 'go'. Someone had even threatened to immolate him. DT driver was shoved around again to leave the scene.

The crowd by that time had thinned and dispersed. Later, SSP Amir Farooqi was called for details in this regard, who gave a totally different version of the incident. According to the SSP, “The victim was beaten up because of eve-teasing.” On a question he said that a police mobile reached the spot after some time, however the crowd had already dispersed. He confirmed that the man is safe and was not burnt alive by the mob.

I have been told by several people that putting myself in danger was not a good idea. That the man might have been a thief and perhaps this is the only way to get rid of the menace of mobile snatchers. Here is why I disagree, let us revisit August 15, 2010, when Mughees, 15, and Muneeb Butt, 17, alleged mobile snatchers, were beaten to death in front of a crowd which included members of the district police. They were proved innocent in the court, posthumously.

In another case, an angry mob burnt two robbers alive in Karachi, on May 15, 2008. Yet another case is of a man burnt alive in Dadu for desecrating the Quran on December 23, 2012. Youtube has many videos of Shia men being dragged behind motorcycles and immolated by extremists in certain parts of Punjab.

The problem in vigilante 'justice' is, often it is too late to prove the truth of the matter. Here are a few reasons that could have been used, or are often used to incite a mob in Pakistan: