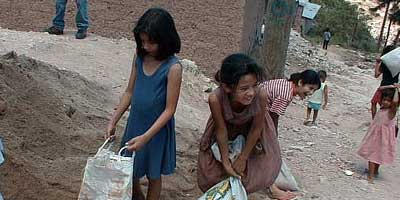 By Alex Liccione, Global Correspondent for Safe World for Women

The Weight of the World on Children's Shoulders

You wake up at 6:00 in the morning to get ready for work after already enduring a twelve hour shift the day before. Your back hurts, but the pain is barely comparable to that of your swollen feet, aching exponentially with every step. Through the repetitious yawns, you struggle to complete basic tasks such as keeping your eyes open. Coupled with the lack of food in your pantry more common than not, a mantra manifests in your head compelling you to go back to bed, but this is not an option.

In fact, this is never an option. You have a family to provide for, an education to pay for, and a brighter future to build for upcoming generations. The weight of the world is on your shoulders. People are relying on you.

You are 8 years old.

On November 20 of each year, countries across the globe celebrate Universal Children’s Day, a day not only to commemorate the lives of the world’s youth, but to raise awareness regarding the numerous forms of violence that continue to plague children today. From children begging on the streets to the forced engagement of children in armed conflict as soldiers to sex tourism and prostitution, the human rights of children continue to be violated across the globe. Included in these forms of violence is child labour.

A recent report by the International Labor Organization (ILO) shows that in 2012, 168 million children ages 5 to 17 were involved in child labour. More than half of these child labourers (85.3 million) fall into the category of "worst forms of child labour"including but not limited to labour such as slavery, sale and trafficking, prostitution, as well as forms of labour that jeopardize the mental, moral or physical well-being of a child.

The highest numbers of children involved in the worst forms of child labour are found in the Asia Pacific (33.9 million) and Sub-Saharan Africa (28.8 million) regions, followed by 9.6 million children in Latin America and the Caribbean and 5.2 million in the Middle East and North Africa. The Sub-Saharan Africa region holds the highest incidence of the worst forms of child labour with one in ten children involved in such forms of exploitation.

Among these regions, the youth of indigenous peoples have a higher risk of being involved in child labour. The violence, discrimination, and poverty combined with unequal access to resources, employment and education continuously afflicting indigenous peoples creates the ultimate catalyst for child labour to arise.

A study by the International Fund for Agricultural Development (IFAD) reports that indigenous peoples make up 5% of the world's overall population yet account for 15% of global poverty. During the Decade of the World's Indigenous People, poverty overall decreased in several Latin American countries, but the indigenous communities within these countries experienced increased poverty rates. This in turn widened the gap between non-indigenous populations and limited prosperity.

With decreasing opportunities of employment for adults, child labour has become a societal norm for indigenous youth in order to survive. A 2012 IFAD country report on rural poverty in Guatemala indicated that in a country where indigenous peoples make up 40% of the total population, 7 in 10 individuals of indigenous descent live in poverty.

As a means of survival, a byproduct of the combination of social and environmental challenges these indigenous peoples face is child labour. The story of Luis Gonzalez Mulul Mendoza, a 33 year-old Mayan, represents that of the majority in rural Guatemala. As a child, Mendoza completed up to a fourth grade education by secretly attending classes – by sneaking away from his family's cornfields where he laboured.

When these acts were exposed to Mendoza's grandfather, he was forced to leave school permanently. Currently, with six children and ownership of a meager plot of land not large enough to provide for his family, the cycle of poverty is likely to continue without assistance.

In a recent report, the United States Department of Labor highlighted Guatemala's increased efforts to eliminate the worst forms of child labour within their country. These efforts included increasing the number of inspections and legal proceedings against employers violating child labour laws, as well as implementing an $11 million food assistance program for families in poverty. However, the report concluded that Guatemala lacks government programs specifically targeted towards the sectors that are known to exploit child labour such as mining and construction, as well as the worst forms of child labour most frequently occurring in the agricultural and manufacturing industries within the country.

Further efforts need to be made in order to eliminate child labour as a societal norm not only in Guatemala, but within the region as a whole.

The complexity and various forms of child labour require solutions beyond the popular notion of consumer consciousness (i.e. avoiding products made by the exploitation of children), as well as shutting down factories that use child labour as a means of production.

Closing sweatshops does not solve the underlying problems of poverty and the need for survival for these children and their families. More often than not, closing a sweatshop without providing an alternative form of income forces these children to get involved in more dangerous forms of child labour such as prostitution in order to survive.

Increased efforts from governments and implementation of poverty eradicating strategies along with greater opportunities for education and adult employment are needed in order to eliminate child labour not only in indigenous communities, but in susceptible communities worldwide.

Alex Liccione works in the field of higher education/civic engagement in Dubai, United Arab Emirates. She is also an active writer/advocate for women's rights with specific focuses on indigenous rights, as well as equal access to education for women and minority groups.

Alex holds a master's degree in Sustainable Economic Development and Responsible Management from the United Nations Mandated University for Peace.