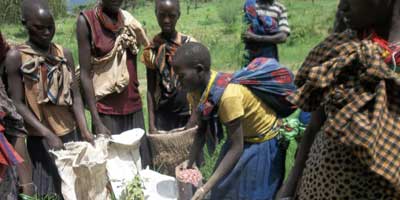 I was alarmed to read, on 23rd July, of 'Biting hunger in Karamoja', where Safe World Field Partner, AWARE Uganda, is based.

Furthermore, Kaabong is one of the worst-hit districts, with 40 people having starved to death in the last two months.

AWARE Uganda is based in Kaabong, where I visited in 2009.

The founder of AWARE Uganda, Grace Loumo, has become a personal friend. Grace visited our home in the UK last year. 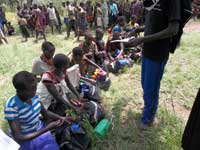 I have now been able to speak on the phone to Grace about the current famine.

Grace has been unable to leave Kaabong to email us, because she is needed there. 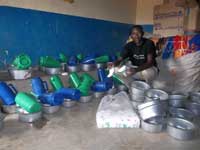 Crops were destroyed, together with crucial infrastructure - namely dirt tracks which people depend upon for movement around the district.

The floods are now followed by drought, which has further destroyed local food production.

AWARE Uganda has been able to provide porridge for breakfast, to children and vulnerable members. 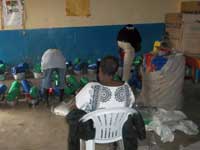 The article I read, in the Uganda Observer, reported that people are foraging for wild leaves and grains. Grace confirmed that this is indeed the case in Kaabong.

Children are unable to attend school as their focus is to find food. In addtion, they often have to travel far to school and recent landslides mean movement is limited.