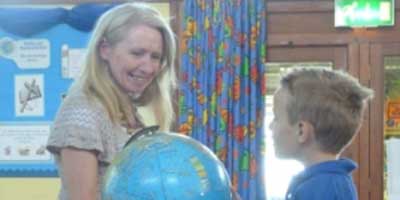 'Where is Africa?' Chris asks a young student.

By Chris Crowstaff, founder of The Safeworld International Foundation. 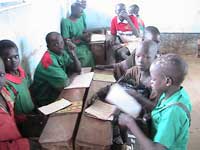 In 2009, I was shown around Pajar Primary School in Kaabong, in north-east Uganda. The visit was faclitated by Grace Loumo of AWARE Uganda, who I was visiting.

Kaabong is a very remote region, with a traditionally nomadic culture focusing on cattle farming.

At our UK event for International Women's Day this year, I came across a village school in rural Dorset, England, which was keen to partner with a school overseas. This Dorset school is also based in a cattle-farming region.

Connecting the two schools has been a truly delightful experience. The partnership is facilitated in Uganda by Grace Loumo's group, AWARE. The Pajar Primary School has no internet access and is reliant on AWARE Uganda to facilitate the partnership.

Both are small schools, with less than one hundred children, and both are based in small communities in rural, cattle-farming districts.

Both schools have a major emphasis on teaching children's rights and sustainability.

All Saints CE VC Primary School, in Bishops Caundle, Dorset, is a pioneer in sustainable energy and rights education.

In 2009, the Bishops Caundle school became one of the first schools to power its premises using a 6kW wind turbine.

Pajaar Primary School in Kaabong emphasises the importants of education for girls. Photo: Safeworld.The Rights Respecting School Award (RRSA) is a UK-wide UNICEF initiative for all children and all those working with or for children in formal education and recognises achievement in putting the United Nations Convention on the Rights of the Child (CRC) at the heart of a school’s planning, policies, practice and ethos. A rights-respecting school not only teaches about children’s rights but also models rights and respect in all its relationships: between teachers / adults and pupils, between adults and between pupils.

All Saints CE CV Primary School focuses on different articles from the Convention of the Rights of the Child, throughout the year.

The day I visited the school, I noticed that their particular focus this week was on peace. So I began my presentation by talking about how I first came across Kaabong. 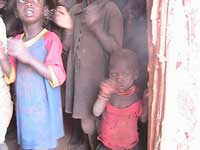 Kaabong children. Photo: SafeworldFour years ago, I had noticed an 'anti-war' message on the internet, written by the Kaabong Women's Group (now AWARE Uganda),

The women's message of peace is what had first inspired me to travel to Kaabong.

The message had touched me deeply because it was obvious that this group of women, from an isolated small town, with very few facilities, faced many immediate challenges of their own. It seemed incredible to me that they could also take time to consider world peace and arrange for a statement to be published online, despite having no web presence themselves.

So, when I had the chance to visit Uganda, I determined to track them down, with the help of a dedicated online friend there. When I arrived in Uganda several months later, I was greeted by Grace and my friend! I then travelled with Grace to Kaabong, where I met the women and was shown around the school.

Learning About the Children of Kaabong

So now, at the little school in Dorset, my challenge was to try and describe the very different circumstances faced by their new friends in Kaabong, as well as the similarities. 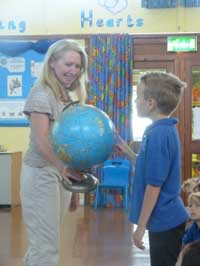 Photo: All Saints CE VC Primary School.I started by showing the children a globe, and asking if they knew where Africa was. They had some idea, but were surprised how big Africa is compared to the small islands here - the British Isles. So I explained that Africa is a continent of many countries, and of course, I pointed out the small land-locked country of Uganda. I asked them if they knew what the equator is.

I showed them that Uganda is very close to the equator and therefore very hot, with problems such as drought and water shortage.

I also explained that there are no real seasons like we have here in England, and the sun rises and sets much faster there. Which I hope helped to give them a point of reference to try and grasp more of the differences between Uganda and England.

A picture speaks a thousand words, so we then showed many photos from our Uganda trip - of our journey to Kaabong, and particularly of the school children there.

The women's group, AWARE Uganda, had presented us with gifts. So I brought these along to the school and passed them around. 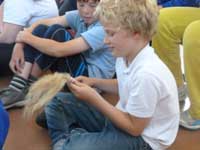 Photo: All Saints CE VC Primary School.First there was the fly swatter, which was very popular. And then the beautiful beads made by the women. I asked the children to guess what the items were made of - the 'swatter' part of the fly swatter was made from the tail hairs of a cow, and the beads were made from recycled paper. The children had great fun guessing.

Next they saw photographs of a traditional homestead, which captured their imagination and I think helped to impress on them the difference between Kaabong and their English village. There was also a short film for them to watch, which we had made while visiting Kaabong.

They were most excited when I said that the children in Kaabong had written letters for them, and were eager to write back to them.

This, to me, meant that the presentation had been a major success, because one of the main aims was to encourage the children to develop a personal interest in their new friends in Africa.

I finished by asking them if they had any questions. They had so many questions that, after about 15 minutes, I actually had to remind them that it was home-time and perhaps we better stop now! I got the impression they would have happily sat there for quite some time longer! 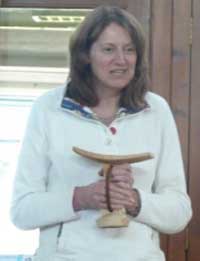 Head teacher at Bishops Caundle,
Mrs Anne Crumpler.
Photo: All Saints CE VC Primary School.Before leaving, we presented the school with one of our gifts from Kaabong - a portable seat, traditionally carried by the nomadic tribesmen when walking for miles with their cattle.

"Children will be getting a letter from a Ugandan child, and will be able to write back. We think this might be the furthest we have ever sent a letter before and we are very excited to tell our new pen-pals all about our school...

Mrs Crumpler (head teacher) was also presented with a unique hand carved wooden stool with a leather cow-hide strap, which had come all the way from the Ugandan village of Kaabong, where our new pen-pals live. Many thanks to Chris and her husband for a really interesting talk!"

This is the video we showed to the children:

Message from the Women of Kaabong

This is the message from the Kaabong Women's Group which inspired me to travel to Kaabong:

We the women of Kaabong Women’s Group on behalf of the rural grassroots women in Uganda, especially Karamoja region, are opposing military actions, budgets, arms fairs, and highly condemn the acts of terrorism and the revenge the USA has taken. Women, children are dying innocently. We bring this message of millions of women deprived of their basic human rights and status in all parts of the world and we join the International Women Count Network in London as we come to the third Global Women’s Strike in which we shall all participate, with the theme "Invest in caring not killing". Women and children are the majority of those killed and wounded in armed conflicts, besides their hard work of life-giving, going through severe hardship, cleaning, nursing, building, walking miles for clean water. All of us who have joined the Global Women’s Strike are here on earth as living witnesses of thousands of people – women who suffer acts of violence and injustice caused by armed conflicts. We forced political and economic leaders to listen to us about military budgets, but we’ve failed to obtain even one satisfactory response to our demands. The demands stand unchanged.

Members of Kaabong Women’s group had a silence of prayers for all those who died in the terrorists act in New York and Washington and for the Women and Children who died in Afghanistan.

Throughout history, women have crossed geographical, cultural and ideological borders in search of peace. We the women can find an end to this terrible act. Join us on the third Global Women’s Strike so that we make it real: "CARING NOT KILLING"

Started in 1989, is situated in the northeastern, heavily militarised, semi-desert part of Uganda.

The Group, the only resource for women in the area, is active in 200 villages. It takes days to reach these by footpath - roads are poor or non-existent.

The group has highlighted women's huge workload: women not only give birth to and raise the children, but also build shelters, plant and grow food in the short rainy season (10 months are completely dry), grind and prepare maize and sorghum, walk up to 10 miles a day for water, and sometimes dig five feet to get some muddy water.

Firewood is scarce as the trees have been cut down, so women use dry grass for cooking which takes a long time. Most people have no electricity or basic health care. Last year, members built their own women's centre in Kaabong where women gather to discuss problems, express their needs, organise to defend their rights and make visible their contributions, learn to read and write, and get other skills which help them get an independent income and refuse domestic rape and violence.

The Centre has a communal grinding mill, cultivates a fruit orchard on land the Group reclaimed, and distributes food during the famine which happens every year.