Uganda: Women and Children Vulnerable to Effects of Climate Change 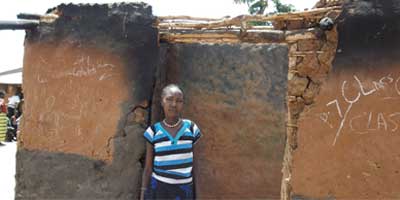 This woman's house was destroyed by wild-fire. Photo: AWARE Uganda

Claire Shaw reports on the gender-related effects of climate change in rural Uganda.

A recent flood in a rural warrior region of Karamoja, Uganda, saw many women and children tragically drown while trying to cross a river in search of food. A few months later, a wildfire swept through Karamoja destroying over 50 homes, leaving families homeless, malnourished and consequently vulnerable to sickness.

This is the reality of the changing climate.

The Reality of Climate Change

It is a problem that is becoming “more apparent” in the area, says Grace Loumo, Founder of Aware-Uganda, a Safeworld Field Partner that works with the people of Karamoja to create community initiatives, to help provide a sustainable environment for them to live in: 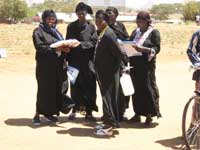 Women training on climate resistance, dressed in black to symbolise their concern. Photo: AWARE Uganda“The reality of the changing climate and its threat to life, sustainable development of communities, and especially grassroots women, has become more apparent in Karamoja and around Uganda. There is extreme weather conditions including, drought, storms, floods, and wildfires, that needs the special attention of all people.

“Many rural women are highly dependent on local, natural resources for their livelihood because it is their source of water, food, energy for cooking, and safety.

We need a bigger dialogue to see how we can make the world safe for us, and for many women affected by climate change, especially in hard-to-reach places like Karamoja.”

For regions such as Karamoja, where environmental condidtions are especially harsh, climate change can lead to critical changes for women. 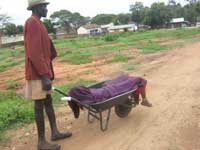 Maternity transport - taking a pregnant mother to the health centre. Photo: AWARE UgandaIn Karamoja, women rely on natural resources to build their homes, for agricultural purposes, and to feed their families. With irregular rainfall and increasing temperatures, crops fail.

Women are then often separated from the men who are forced to take the cattle to greener pastures in neighbouring districts.

A lack of clean water due to polluted rivers or droughts can cause widespread problems. It makes it difficult for women to provide meals, and they often become the caregiver for family members, who have fallen ill from drinking dirty water. What’s more, women are now having to travel greater distances to collect firewood and water. These journeys often prove dangerous for women and children who face being attacked in remote areas by rival tribal groups.

Attempts to grow crops become increasingly futile: Photo AWARE UgandaClimate change is a subject that is causing much debate the world over.

In a bid to encourage world leaders to discuss the transition to a green economy, the 2012 Earth Summit to be held in Rio de Janeiro on June 20-22, hopes to draw attention to the way climate change is affecting populations on a global scale.

With over 70 organisations covering the environment, gender equality, and development – all offering their recommendations to the leaders in Brazil, the event is a chance to push big decision makers for change, and promote environmental action for a world that is seeing increasing floods, droughts, and extinctions. 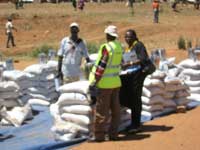 Grace Loumo, founder of AWARE Uganda, inspecting delivery of food aid for women and families. Photo: AWARE UgandaAnd because women — whose role it is to provide food for the whole family, collect water and firewood, and look after children alongside household chores —  make up some 70 per cent of the world’s poor population, in many situations, they are the ones who bear the brunt of extreme weather conditions.

Women are forced to walk further to collect firewood and clean water, suffer emotionally and physically when crops fail as they are unable to feed their family, and are subjected to an increase in domestic violence due to frayed tensions in the family home from a lack of food.

That is not to say that men aren’t also suffering from climate induced changes in seasons. A lack of food is devastating for the entire family. Yet in many countries, a lack of women’s rights to own land is one that puts women at a greater disadvantage to men, as they are reliant on each crop succeeding to survive. And if men have to sell the land, women are left to fend for themselves.

A World Bank report released in 2011 estimates the rural population in Uganda makes up 86.70 per cent of the total population (2010). With such a large percentage of the population reliant on natural resources to survive, the effects of shifting weather patterns have been devastating for many families.

This year alone, lightning strikes have killed at least 30 people across the country, including eighteen schoolchildren, with hundreds injured at Runyanya Primary School in Kiryandongo District.

Earlier this month, flash floods destroyed a whole season of crops in the remote eastern region of Butaleja, leaving farmers unable to provide for their families and pay their children’s education fees.

In 2010, a landslide caused by heavy rains wiped out entire villages and schools, killing over 350 people.

But it is the effect climate change is having on the family, and the burden that is placed upon women as a result of failed crop seasons, that is cause for concern.

The documentary, Faces of Climate Change - The Gender Perspective, produced by the Danish government to highlight the consequences of climate change for women and men in Uganda, calls attention to an increase of domestic violence against women and “migrating men” as a result of failed crop seasons and little food.

In the film, Nathalia Feinberg, Ambassador of Denmark to Uganda, says:

“The women and the children are most vulnerable to climate change, and other issues that affect food production negatively. You also tend to see more conflicts at the household level, and that is where we also see more violence against women, and also abuse of children. But it is not only the women and the children that are suffering, but it is also often the males, because they feel their responsibility to provide for the family, and it affects them in terms of their feeling of self-worth.”

When a season fails due to extreme weather conditions, women are unable to provide food for their husband and children. It is then often the case that men become “migrants” according to Hon Maria Mutagamba, the Minister for Water and Environment in Uganda. They abandon the family when the land is no longer productive to search for work in the city, leaving behind the women suffering with their children.

The influence of alcohol among men is also a major problem that is putting a strain on family relationships.

Dried-up rivers and streams, contaminated waters from floods, polluted air inside homes from biomass-burning stoves, and mudslides often caused by deforestation from women cutting down trees to use for firewood — so what does the future hold for rural communities?

Eco Development Foundation (ECODEF) is a grassroots organisation in Uganda that has set up a project to offer women in rural villages ways of adapting to the affects of climate change.

Their main objectives are to raise awareness on the impacts of climate change adaption, encourage women to start using energy and agro-forestry technologies to improve indoor air quality and food security, and promote natural resource management.

Currently, more than 122 women and girls have been trained on climate change adaption, where tasks include planting trees, creating vegetable gardens, and using innovative energy efficient stoves, called Lorena stoves, to reduce biomass use which contributes to indoor air pollution and deforestation.

It is estimated that every year, Uganda loses 1.8 per cent forest cover, which is attributed to increasing demand for agricultural land wood fuel by the rapidly growing population — one that is set to grow to over 100 million by 2050.

Lorena stoves reduced wood fuel consumption by over 55 per cent in many households, and as a result, deforestation has slowed down, carbon emissions have decreased, and women and girls spend less time and energy travelling to collect firewood.

This is just one example of how rural communities can adapt to the affects of climate change, and work towards a sustainable future.

The Rio+20 United Nations Conference on Sustainable Development will be a chance for organisations around the world to share their stories and recommendations on sustainable, and equitable development for rural and urban communities.

"For me, journalism is not just about informing the public, but encouraging people to have an active interest in what is going on around them; to engage in freedom of speech, and use journalism in its multimedia forms as a springboard for discussion, debate, and spreading information."