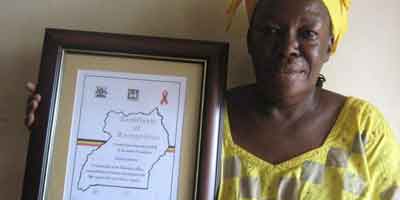 On 31st May, 2010, the founder of AWARE Uganda received a Certificate of Recongition for her leadership skills in campaigning against HIV/AIDS.

Grace was presented with the award by President Museveni of Uganda, on behalf of the parliament and the people of Uganda.

AWARE Uganda is based in Kaabong, which has a very high incidence of HIV/AIDS

For many years, Grace and AWARE Uganda have been working to raise awareness about HIV prevention.

Drama is a major part of this work and Grace has travelled the country with an inspirational drama group of HIV positive women and men, putting on shows to educate about HIV prevention, using simple theatre which is strongly emotive and, at times, even brings in humour.