After the Pakistan Floods: Rebuilding Communities

After the Floods: Rebuilding Communities

In two successive years, Pakistan has been struck by devastating floods, wreaking havoc in some of the poorest communities.

Last year's floods in the southern province of Sindh are thought to be even worse than the previous year's deluge. At least 250 people lost their lives.

Caused by heavy monsoon rains, the floods damaged or destroyed some 1.5 million houses in Sindh alone, the aid agencies say.

Vulnerable groups like children, women, disabled, and older persons continue to suffer through lack of shelter and other non-food-items.

The women, especially female-headed households, are the vulnerable groups; they face violence and gender discriminations at all levels. Sindh remains by far the worst affected province.

Sewa Development Trust Sindh (SDTS) is an implementing partner of International Organization for Migrants (IOM) under One-Room Shelter (ORS) Phase-III Program implementing in union council Dilawar Hussain districts Mirpurkhas of Sindh province. With the financial support from IOM, SDTS is involved in the monitoring and  mobilizing of 500 ORS.

The design for a one-room shelter uses local material and techniques, and targets the most vulnerable groups –  such as female-headed households, minorities, disabled, the elderly, low-income household and familieswith large numbers of family members.

The project uses local designs and mobilizes communities’ capacity for self-help to meet the unprecedented need for shelter solutions.

Households engaged in repair and restoration activities through cash-for-work initiatives that will assist them to meet their post-return basic survival needs. Additionally, a grant mechanism for restoration of assets for small businesses will be administered to revitalize these key sectors of the economic and social environment.

SDTS have made possible in any way to follow Disaster Risk Recommendations (DRR) to beneficiaries, initially and now finally they completed all their plinth, wall, and roof level work accordingly.

Medical Camps Assist the Most Vulnerable

A total of 405 patients were treated and provided free medical check-up and medicines.

The main objective of the medical camp was to assist and provide necessary health support to most vulnerable areas where there is no medical facility existing, and  neither provided by any other organization.

During the baseline, village Ranipur was found one of most vulnerable village – with a population of more than 4,000; the basic need was to provide health services especially to women and children in need.

SDTS  celebrated International Women’s Day in association with Safe World for Women in Women for Women International's Join Me on the Bridge Campaign.

Hundreds of women, men, and children participated in the event on Red Bridge (Garrhi Pull) Khairpur to mark the day, and drew the attention of the local media.

SDTS signed an agreement with LEAD Pakistan for the Climate Leadership for Effective Adaptation and Resilience (CLEAR) project. CLEAR is a 5-year initiative of LEAD Pakistan, focusing on climate change impacts on the lives of poor people and farmers in southern Sindh and Punjab.

The project aims to empower and quip local stakeholders to streamline their local climate adaptation practices and develop district based local adaptation plans of actions (LAPAs).

Mr. Khadim H. Dahot, SDTS Managing Director,  is Master Trainer for CLEAR Project and attended the 1st training workshop on “Basics of Climate Change: Investing in Leadership for Adaptation and Resilience”.  held in the  hotel Regent Plaza Karachi, in April 2012.

Under Sewa Development Trust Sindh (SDTS)'s Active Citizen Training program, a total of four trainings have been conducted with young people; each training is based on four days. Following are the details of trainings and number of participants participated. Five trainings have already been reported in our previous report. 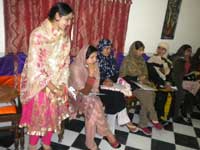 SDTS is implementing ourActive Citizen Program with the support of the British Council Pakistan in the three districts of Sindh province; the Active Citizens programme aims to develop leadership skills in young people of Khairpur, Sukkur, and Larkana districts.

It facilitates community and political participation amongst young people through interaction with local community, organizations and local and national governments. It also develops an understanding of global issues which affect young people and their communities.
The programme aims to increase Active Citizens outreach through developing strengthened partnerships with civil society organizations in the country and engage with communities and young people in the Khairpur, Sukkur, and Larkana districts.