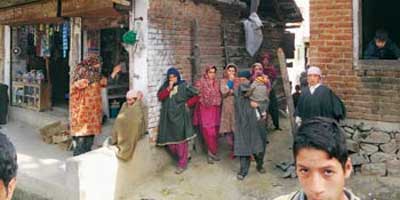 A little over 20 years ago when Kashmir was burning in insurgency and desperate security forces were trying to douse the fire, army soldiers gang-raped over 30 women at Kunan Poshpora village in Kupwara district.

There were 34 petitioners against the incident - all describing in gory details the army brutality - on the intervening night of February 23 and 24, 1991.

They said the army cordoned off the village, the men were taken to a field for an overnight interrogation and the women were gang-raped in their homes without any consideration for their age and marital status. The age of the victims ranged from 13 to 70.

Now the State Human Rights Commission (SHRC) of Jammu and Kashmir has asked the government to reopen the mass rape case. It has called for proceedings against the then director prosecution, who recommended that the case be closed.

It also sought action against the officials who approved the "childish recommendation" of the director.

The SHRC sought a report from the government after 34 petitioners filed four petitions with the rights panel in 2004.

Now, the SHRC has ordered a compensation of Rs.2 lakh to the petitioners.

"The offenders have been neither taken to a civilian court nor a court martial was initiated. Instead, the case was closed. The investigation was stopped and the files were shelved. This has benefited the offenders," SHRC member Javid Kawoosa said.

"We feel sorry for the victims that the government has ever taken the trouble to approach them and offer help. Right from February 1991, successive governments have been negligent, insensitive and indifferent towards the victims as if nothing happened at Kunan Poshpora. We recommend that a minimum of Rs.2 lakh be paid to all the victims and complainants in all the six petitions, including the composite complaint of 34 petitions," the SHRC said.

The SHRC mentioned the statement of the then Kupwara district magistrate, who visited the village on March 7.

In his final report, he said the soldiers "behaved like wild beasts". "In the morning, when the menfolk were released, they were shocked to see that the army personnel had gangraped their daughters, wives and sisters. They forcibly took no objection certificates from the locals. I feel ashamed to put it in black and white what kind of atrocities and their magnitude was brought to my notice on the spot," the magistrate's report reads.

Though medical reports and testimonials confirmed the gang-rape, the investigation was closed as "untraced."

However, the SHRC quoted reports from the then director general of police and health officials of the Kralpora hospital. These also say that the "chastity of women was ravished".

The police report said "it had been alleged that army personnel after consuming liquor raped 23 women irrespective of their age".

Moreover, the SHRC is armed with the first complaint filed by a village woman alleging that army personnel of 4 RR 68 Brigade raped her on that horrible night.

Another complaint on behalf of the 34 rape victims was filed by Sharief-ud-Din Sheikh, who died when the case was being heard.