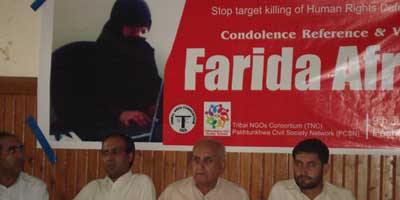 By Josh Shahryar, for Safeworld

Islamic burial is a complicated process. Usually, relatives gather the body to wash the dirt, dust and in some cases, blood off it. When it's clean, a white cloth is tied around the lower jaw to keep the deceased's mouth closed. Then the body is wrapped in a white cotton cloth - the last clothes that the person will ever wear. Then put in a grave that's about as deep as a person is tall. Slabs of stone are placed above the body to keep it from being covered with dirt. Then, the dirt is poured over the slabs to complete the process.

Farida Afridi Kokikhel is sleeping in one of these earthen homes right now, wearing her last clothes, her mouth shut and all doors for her to help those she died for closed on her. The blood from the gunshot wounds on her body, inflicted by men displeased by her women's rights work, washed away at the hands of those who loved her. She is another victim of unashamed patriarchy in Pakistan.

Photo source: Tribal NGOs ConsortiumFarida was young, in her mid-twenties. Her murder, earlier in July, by the people she was fighting with her activism touches many hearts. No emotion, however, is evoked more by this tragedy than helplessness: "How do you save someone who's not with us anymore?" She's a martyr for gender equality. A cause that looks about as hopeless where she worked in Pakistan as the faces of those who loved and cared about her.

A daughter; a sister; a woman, Farida had devoted her life to improving the lives of women in the Federally Administered Tribal Areas of Pakistan - or FATA as it is known. A belt of mountainous valleys running from northeast to southwest, it straddles the border between Afghanistan and Pakistan. With an area of roughly 23,000 square kilometers (just over 10,000 square miles) and a population of 3.1 million, it is one of the poorest regions in the country and is governed by a separate set of laws from the rest of the state called CFR that were imposed by the British colonial government some 111 years ago. These laws and other factors have turned the status of women's rights in FATA into an unimaginable tragedy.

Some of my colleagues often say, "women are like property in FATA." But even that doesn't do justice to their suffering. The men of FATA face harsh realities of their own, including utter economic disenfranchisement due to decades of government neglect, cross-border violence thanks to the War in Afghanistan, and an agricultural lifestyle in a region where there's very little arable land to begin with. The women, though, are sort of where the buck stops. It's where all the violence, all the harshness and disenfranchisement comes crashing down like a meteor.

This is the same region that's being overrun by the Taliban - notorious for their anti-women attitudes; where US drones rain down on murderers and children alike; where the laws to keep women firmly in the kitchen are about as harsh as is making a living in the rugged valleys; where the hearts of men are as stony as the peaks of the Hindukush mountains that hold those valleys in its bosom. And some of those hearts couldn't have Farida try to improve the lives of women. 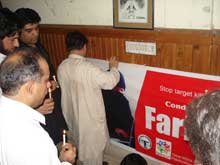 Photo source: Tribal NGOs ConsortiumI heard of Farida's work a couple of years ago. The first thought that struck me was, "She either doesn't know she's going to die for this or she doesn't care." I spoke to friends after she'd been murdered a small distance from her home by unidentified gunmen and I got the same response. She knew she was living on borrowed time. She knew the minute she helped start SAWERA with her friend Noorzia that the consequences would be grave. SAWERA - meaning 'dawn' in Urdu, Pakistan's national language - is an NGO working in FATA and the neighboring Khyber-Pakhtunkhwa province on socio-economic development, as well as ecological conservation, social protection, particularly for women and children, and education for women. The last bit most likely got her killed.

She died for trying to educate women in a region where general literacy is already plummeting. A report by the Society for the Protection of Rights of Child last year found that it had gone down from 29% to 17% - mainly because of the continued fighting between the government and the Taliban and the Taliban's clamp-down on government-run schools, often the only place where the poor can get an education in Pakistan. Women already suffered from illiteracy in the region even before the fighting started that shut school doors on hundreds of thousands of children.

Women's rights has suffered greatly, too. Just last year a report funded by the United Nations found cases of abuse as shocking as a woman having her breasts cut-off by militants and women forced to have sex for food, after being internally displaced by the fighting caused by the same militants. Honor killing is an accepted part of the customs of most areas in the region, with scores of women dying each year, without the benefit of a trial or a jury, at the hands of men defending their social rank. Parda, the custom of women having to cover themselves, is compulsory and women face death in some cases if found outside their homes without it, or even inside if in the presence of unrelated men.

Farida wanted to change that. A woman trying to promote women's rights through education… inconceivable - some thought.

How could you get a culture as oppressive as this to embrace equality when generally, women aren't even allowed to go to school? But she was different. The depression felt by her colleagues and those who knew her is exacerbated by the fact that she was aware of how hard it would be to help the situation.

Yet even in this hopeless situation, knowing she could be killed for what she was doing, she tried to do it. And that's what hits everyone hard. How could a person try to do something that looks impossible, knowing that she is probably going to die for it? The answer to that question lies under six feet of dirt, not far from the homes of women she tried to help - women whose future looks slightly brighter now that people like Farida are out exchanging their lives for their freedom.

After all, what does teaching a few women how to read and write their national language do, when it's not possible for her to read what she wants to? Or how useful is it for a woman suffering crippling poverty to learn to divide by 2 or multiply by 3? The most these women get through the work of organizations like SWERA is a few years of primary or intermediate education, right? Even if you join her worst critics and water down her work to just that, it still makes a difference so noticeable that Farida thought it was worth sacrificing her life for.

In the short term, it saves lives.

In 2010, a study paid for by the Bill and Melinda Gates Foundation, analyzed 915 censuses from 1970 to 2009 from 175 countries, looking at data on education, economic growth, H.I.V. infection rates and child deaths. What they found is a testament to the importance of Farida's work. Statistical models show that:

For every year of extra education women received, death rate for children under 5 dropped by nearly 10%, estimating that nearly 4.2 million fewer children had died in 2009 compared to 1970 because women of child-bearing age were more educated. In 1970, women in developing countries between the ages of 18-22 on average had received two years of schooling - compared to almost seven years in 2009.

"…educational achievements of women can have ripple effects within the family and across generations. Investing in girls' education is one of the most effective ways to reduce poverty… Girls who have been educated are likely to marry later and to have smaller and healthier families… Education helps girls and women to know their rights and to gain confidence to claim them… The education of parents is linked to their children's educational attainment, the mother's education is usually more influential than the father's. An educated mother's greater influence in household negotiations may allow her to secure more resources for her children… " (emphasis mine).

It's somehow cathartic to think that the children of the men who are responsible for Farida's death might some day get to live longer, receive an education and manage to get out of the poverty that plagues the region. It's actually comforting to think that those children might grow up to use education they have received thanks to their mothers' role in promoting education inside their own families - education they received thanks to organizations like SAWERA. Education that some day might help forge an alliance between women and men in the region to foster equality so maybe the women of FATA won't have to live their lives as indentured servants.

I think I and many others were wrong in our assessment. No, now I think I know she was aware of the criticality of her efforts and while she may have cared about staying alive, she knew death was an option. I believe that if she did give her life for equality, she was pretty sure about how vital her work was going to prove in the short and the long term. That her work is going to save lives is beyond question, but what's more important is that it will go a long way towards making countless other lives worth living. None of that of course brings her own life back. But she hasn't lost, even as she lies underneath tons of dirt.

Her work more than anything proves how futile it is to attempt to stop the spread of equality. Even in death, she will continue to save and better lives through the women she's helped educate - even if we ignore all the other work her organization's done and continues to do. The losers can hide from the police all they want. Some day, they and their likes in FATA will be swept away by the power of women caring for women by educating them… and ironically, it might even save the lives of men like them.