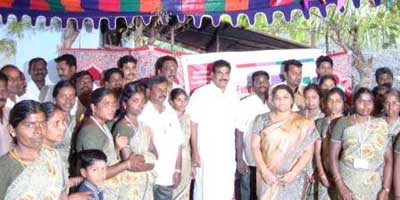 How we are financed

New Life depends on the generosity of private donors.

New Life designs projects based on surveys of the

socio-economic problems of the project area and support the poor, abused and abandoned children and women by executing the projects with a defined goals/objectives.

The current projects of New Life include orphanages for children of incarcerated parents, saving children from child labour, ensuring primary education for the rural children in India, Early learning centres for children of vulnerable community groups, 'Read to Lead' Project, taking care of the medical needs of physically and mentally handicapped children children.

One of the many New Life projects:

Children enrolled in these schools are motivated to learn, and, after a year or two, based on their capabilities to interact with other children, they are admitted into regular schools.

The first special school under this project was started in 1999 in the Manamedu village of Musiri Taluk. Its students comprised mainly of child laborers engaged in the weaving, gem cutting and match industries. By September 2008 the project had benefitted a total of 1366 children, out of which 730 children had been mainstreamed and admitted to regular schools.

At present, the program is benefitting 174 children through six special schools situated in Arangoor, Musiri, Kamatachipatti, Amoor, Kodiampalapalayam and Ariyamangalam. 102 children have been admitted to regular schools in the current year.

Besides formal education, students are also given vocational training in tailoring, crafts, etc. They are also given opportunities to engage in activities such as yoga, music and dance. Nutritious meals are also provided to these children daily and every month, Rs.100/child is deposited in each child’s account to increase his/her family’s total earnings.

New Life is based in Kumaran Nagar, a suburb of the city of Tiruchirappalli, in southern India.
The project office is in Srinivasa Nagar.