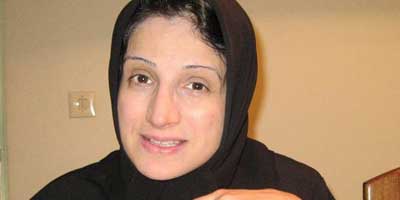 Nasrin Sotoudeh has spent 105 days in solitary confinement and is so weak from her hunger strike that she can barely finish sentences.

The leading Iranian human rights lawyer has nonetheless issued a declaration of defiance from her prison cell.

“If you are going to hell then go like a man,”

...she told The Times in a message sent from the infamous Evin prison in Tehran via her husband, Reza Khandan.

“Let them give me a harsh sentence because that brings a person honour.”

Mr Khandan, who risked reprisals for speaking to a foreign journalist, told The Times that he was proud of his wife and supported her stand whatever the price.

“I very much fear for her life but I don’t know what I can do to save her,” he said.

Ms Sotoudeh, 47, the mother of two young children, is becoming the latest symbol of the regime’s barbarity. She was arrested on September 4 for defending Shirin Ebadi, the exiled Nobel Peace Prize laureate, and dozens of political prisoners arrested after last year’s disputed election.

Since then she has been denied almost any contact with her lawyer and family, and was refused permission to attend her father’s funeral. She went on a dry hunger strike, taking no fluids, that the authorities thwarted by putting her on a drip but then she began a hunger strike on December 6.

Ms Sotoudeh is awaiting what her husband expects to be a long sentence on charges of spreading propaganda and threatening national security. She faces an additional charge of appearing with her head uncovered in a film that she made for an awards ceremony in Italy last December, which she had been barred from attending.

Simon Gass, the British Ambassador in Tehran, said on his website: “Her real crime is doing her job courageously and highlighting injustices that the regime would prefer stayed hidden.”

Ms Sotoudeh gave her husband the message for The Times during a rare telephone conversation.

“Her voice was trembling and extremely weak. She had to summon all her energy to finish her sentences,”

Mr Khandan said that when he saw his wife in court last month she looked so emaciated that she was hardly recognisable. At least 15 other human rights lawyers have been arrested or driven into exile since the regime cracked down on those defending the victims of its repression.