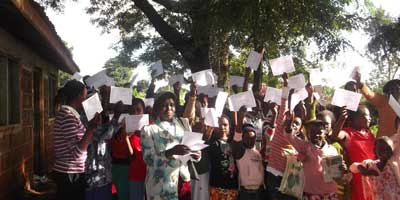 Women and girls of Karurumo proudly displaying their anti-FGM certificates.

We held another anti-FGM [female-genital-mutilation] seminar; this time it was in Karurumo, a small town nearly an hour away from Embu - about 10 kilometres from Evanson’s rural home [Evanson is the founder of Compassion CBO].

Karurumo is a rural town in eastern Kenya. It is on a highway but all other roads and paths are untarmacked. There are small shops, dotted around the paths off the highway, which sell everything from bread to batteries. They are basically one room, where you stand at the door and ask for the goods you wish to buy.

Our anti-FGM seminar was held at the Salvation Army Karurumo Polytechnic - a very large, very green plot of land with various buildings and houses tucked away behind hedges and trees. We sat on benches set out under the shade of some big trees, close to the highway.

The seminar was run much like the one we held in Githogoro, but with a few differences. Firstly, it was just girls and women: there were 20 girls aged between 8 to 15 years old, - and also there were women of all different ages, which was amazing.

Phyllis [board member of Compassion CBO] had already explained to me that it is really important to get the message to people across generations; it is often grandmothers who will pressurise girls into undergoing FGM, especially in rural areas. Unfortunately, often they see it as an important part of their culture and having been ‘cut’ themselves, when it was less of a taboo and when education wasn’t available to them, they are less aware of the horrendous side effects that can happen. So yeah, it was amazing to see these older women being part of the change, nodding strongly as Phyllis and I told the girls that if they ever felt pressured into FGM they could come to any of the women present and they would be helped to report whoever was trying to convince them to the authorities.

It wasn’t all good news at the seminar this time - being in a rural area presented a language problem: very few people spoke English, the majority spoke Swahili but especially some of the older women only spoke the local language. It was a challenge even for Phyllis, as she didn’t speak the local language, so despite talking about FGM fluently in Swahili and adding in some Kikuyu (which is sort of similar to the local language), there were times when we had to take time discussing concepts to translate it to the local language. Luckily, the local language is Evanson’s mother tongue so Phyllis could ask him and I just had to let him translate my 'owning your own body and not all traditions are good' spiel after I had spoken, but it did take a lot of extra time. Obviously the time was worth it to ensure everyone understood and could take part in the discussion.

Another interesting diversion was a particular woman who turned up. At the time Evanson, Phyllis and I had no idea why she was there but she kept calling over women and calling people on her mobile. Afterwards Jane, who organised the seminar with Evanson, told us that the mysterious woman was a ‘cutter’ who was there berating the women who attended about how we were ruining her business and that she got 400/= per girl she mutilated and that the women needed to tell us to leave. The calls she were making we to the local chief and sub-chief complaining about our presence and trying to get their support. Luckily they, and the women, told her to leave us alone.

When I was told I was livid - all up for calling the police - but as the women had gone it would have been unlikely that the authorities would have found her as she would have disappeared back under whatever rock she crawled out from, but that didn’t stop me raging about mercenary people with no consideration for humanity, common decency and right and wrong for quite a while.

My calm was slightly restored when walking back to the road to get a matatu back to Embu and then on to Nairobi, we bumped in to the chief or sub-chief (not sure which) and he told us that it was a shame we hadn’t come to see him before the meeting (we’d been late so hadn’t managed to see him before the meeting). He made us promise to visit him next time we come and keep him involved so that he can mobilise a lot of people so that our seminar reaches even more!

Progress - But a Long Way to Go

It was an incredibly long day with trying episodes but hopefully the twenty girls who attended now have the information and strength to deny anyone who tries to get them to undergo FGM and the 29 women who came will help any girl they hear of being at risk.

We have another anti-FGM programme going next week so will let you know how it goes, until next time!