Working with Compassion in the slums of Nairobi - first impressions 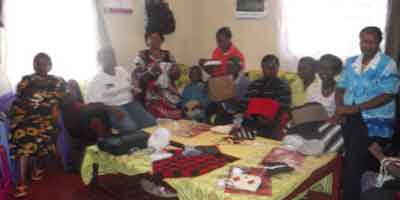 Ndumbedi Compassion Self Help Group, based in Kiambu.

Linnet Griffith-Jones arrives in Nairobi, to begin an internship with Compassion CBO

Getting to know Kenya

So I have now been here for a week and a half and am starting to settle in and get to grips with life in Africa again.

Having lived in neighbouring Uganda last year, I thought I had a pretty good idea of what to expect but living in the neighbouring country now has shown me how massively inaccurate generalisations are when you are talking about Africa. Kampala and Nairobi obviously have some resemblance: the weather is pretty similar, the matatus (minibus taxis that carry about fourteen people) look almost the same, but Nairobi is a lot bigger: the buildings are newer, the roads bigger and the boda-bodas [motorbike taxis] that are ubiquitous in Kampala have been banned from Nairobi city centre making it feel a lot calmer, especially as there also seems to be a lot more trees and greenery.

One incongruity that I am finding it hard to get used to is the juxtaposition of poverty and wealth: never before have I seen massive new developments overshadowing corrugated iron slums. In all honesty, it is hard to wrap my head around the idea that people can stand on the balcony of their brand new luxury flats and see these people struggling to survive without doing anything. I hope I don't get used to it because if I do I'm afraid I will become one of those people, the ones who have seen it for so long that they forget that it is wrong.

I arrived on Thursday, 1st January, and was met at the airport by my new boss Evanson, who started Compassion CBO 10 years ago as a tiny school with three children and one bench - he keeps the bench as a reminder of how far Compassion has come.

Now the school, which is also known as Greener Life, has around 100 pupils in five wriggly tin classrooms based on land rented from a church. There are five teachers all who are volunteers for Compassion and I have been helping out with teaching classes four and five, which are the oldest students in the school. The school is mostly funded by donations, mostly in-kind, from the community of Githogoro slums and the parents of the children who - if they can - pay a little bit towards their children's books and bring lunch for them. If the parents can't help, then Evanson and the other teachers do what they can.

Evanson Njeru, founder of Compassion CBO, in the orchard.The other way that Evanson gets money for the school is from the orchards that he took me to see. There he grows sweet potatoes, pumpkins, and papaya. The first two are used in the school to give the teachers something to eat at break time (the teachers are responsible for getting their own lunch.)

The papaya is sold (very cheaply - 50KSH compared to the usual 100KSH) to women to sell on. The money made on the papaya's goes back to the school but it also provides some of the women of Githogoro with an income.

Unfortunately, I have discovered that teaching is not my forte. I am okay with Class Five which currently has seven students, but Class Four has 20 and controlling them is beyond me. Luckily, we are expecting the last volunteer teacher to arrive soon, so I will only be teaching English to the two classes instead of the multiple classes I am teaching at the moment.

While Evanson started with just the school, he quickly realised that if you really want to change children's lives you also have to reach out to the parents, especially mothers, and help them to change their lives and their children's futures.

On Thursday, I got to visit one of the groups Evanson set up, called Ndumbedi Compassion Self Help Group, which is based in Kiambu. It is a group of twenty women, who come together every Tuesday for two hours to create bags, jewellery, and other crafts to sell, providing them with extra income and allowing them to save. Evanson brought in a teacher (that he paid for), he wrote their constitution, and he is looking for a market for their products. What is massively inspiring about the group is that, despite being set up only a few months ago, they are now self-sufficient and Evanson is helping them to register as an independent Community Based Organisation with the Kenya government.

The thing I find most inspiring about Evanson is not just how hard he works for so little, but also his complete commitment to helping people help themselves. He has started so many groups and projects and requires nothing back, except maybe the friendship of others.

This is probably most evident in Compassion's Pig Project, where they raised pigs and gave them away to people in the slums to provide them with a source of income; the female pigs are kept and used to breed while the male pigs can be sold for butchery. All he asks of the recipients of the free pigs is that they give a few baby pigs away to others in need so the cycle of help gets wider and wider.

Despite having finished my first week, there is still tons of Compassion's work that I need to be introduced to: there are loads of women's groups that I need to meet and I have only seen one of the two shambas [orchards] that Compassion has. There are also projects that are in the process of getting off the ground - like the new Chicken Project, where Evanson intends to raise and hatch chickens to give to the women in the slums to provide them with income and nutritious food.

I'm looking forward to keeping you all up to date on all the projects and progress, so stay tuned!