Finding Compassion - Grassroots Help for Women and Children in Kenya 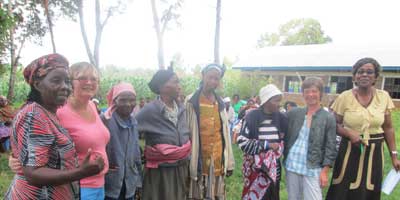 For nearly two years I had been planning and saving for a trip of my lifetime to Kenya. In addition to the traditional safari/beach resort holiday, we (my friend Angela Jeffrey and I) wanted to link in with some projects because we had heard so much about the high levels of poverty largely experienced by women and children and the interlinked health and inequality issues they face on a daily basis.

I didn’t think it was going to be easy accessing any projects, but amazingly it was. I simply googled ‘women’s projects in Nairobi’ and up popped a link about some grandmothers rearing pigs as a means of earning a living for themselves and their families.

The charity championing the grandmothers was Compassion CBO, a grassroots, not-for-profit, community-based organisation working to eradicate poverty through education and sustainable development and to rehabilitate orphans and vulnerable children.

I emailed the main contact and gave a very brief explanation of who we were and why we wanted to visit some of their projects. I honestly did not expect a reply or at least not a positive one, but how wrong I was. Before long we had two dates set, one to visit the Nairobi slums and the other to visit Tharaka District of Nithi County where Female Genital Mutilation (FGM) is still being practiced.

Educating Children of the Slums

On the first day, we were met from our hotel at 10 am and spent all day travelling from one project to another, although many of the projects are within one particular slum, so lots of walking.

One of the most memorable places for us was the children’s rescue centre which hosts about 300 orphans and vulnerable children from different slums in Nairobi. The children come on daily basis and are fed and educated for free in the primary school.

It is mandatory in Kenya for every child to go to school in full school uniform, which costs $10.

Poor families have on average six children and they live in grim 10ft by 10ft shacks in the city. They earn less than $365 per year so many cannot afford to buy uniforms and thus the children do not attend school. Compassion CBO supplies children with uniforms at very low cost or even for free – depending on the parents or care giver’s circumstance.

Care givers are often the aged and ailing who are left to take care of their grandsons and granddaughters after the death of their children, usually through HIV /AIDS.

We met lots of women and children at the school and the clinic, where a multi–agency team (including a social worker) provide a doctor's surgery, immunisation against the most prevalent diseases, counselling, and education around birth control, safe relationships and healthy eating. This costs about 50p per year per adult.

To go into a lot of detail about the rest of the day would result in a very long article! To summarise the day, we met some inspiring women who were obviously overjoyed to see us (we danced and clapped hands a lot).

Many of the women have benefited from Compassion’s income-generating activities. They believe in showing people how to fish instead of giving fish – and not only how to fish, but making a fishing hook. Some of the income-generating activities include: pig projects, goat keeping, rabbit rearing, mini-shops, hand crafts, and integrated farming technology. And we saw the lot!

Most City Dwellers Have No Access to Clean Water 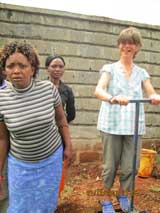 Another huge issue in Kenya is clean water.

Seventy percent of city dwellers live in informal settlements where they have no access to clean water and many children have lost their lives due to water contamination.

A lack of water keeps children out of school as they have to queue for water for up six hours a day.

A Song From the Orphanage Girls

Our last visit that day was to an orphanage where 12 very young girls sang a lively greeting song continuously for about 10 minutes.

It was very late because we had got behind with our schedule but we would not have missed it for anything.

Day 2 was dedicated to visiting a women’s collective whose members campaign against Female Genital Mutilation (FGM). Young girls between the ages of 6 and 10 are forced to undergo this very painful (sometimes lethal) practice and basically their rights are horribly violated due to outdated cultural beliefs.

The FGM ceremony is carried out and 'celebrated' every December. About 2,000 girls are circumcised in one FGM season. The circumciser is paid between Ksh. 500 and Ksh.1000 ($10). Parents believe that the cut reduces libido in girls and is therefore good for morality. FGM persists because the girls who have undergone the ‘cut’ drop out of school and are culturally coveted for early marriages and early pregnancy. Girls escape FGM, only at the risk of being beaten and abused – especially by the elders.

Mothers opposed to FGM are often forced into bribing circumcisers to symbolically perform the cut on their girls. The circumciser will ensure blood can be seen so as to keep FGM supporters believing the circumcision has taken place. The circumciser is paid an extra Ksh.300 ($4) on the top of the normal fee to perform the 'symbolic' act.

Compassion CBO holds workshops both in the rural areas and slums to educate the communities to abandon FGM.

The workshops are held in schools and other public institutions. Also, many churches have set up a different model of performing a rite of passage where the girls undergo an alternative 'rite of passage' with a symbolic 'cut' to initiate them into womanhood. They are counselled and taken through lessons on puberty, sexuality, womanhood and chastity.

The 'cut' is performed on the Saturday preceding a graduation ceremony. A ribbon is tied on each of the girls’ thighs and then each one is asked to vow that she will safeguard her virginity till marriage and be responsible for her body. Thereafter, the ribbon is cut to symbolize that she has been initiated into adulthood.

The women and young girls we met, who had stood up to their wider community and elders, were truly admirable. One young woman told us that she wanted to stay at school, have a career and then choose if and when to marry and have children in her own time.

When we explained that young girls are taken out of the UK by their parents to undergo FGM and even more worrying – circumcisers are practicing in the UK, they were in total shock. They highlighted a common interest in both countries working together on campaigning and eradicating FGM.

I aim to stay in touch with this group and organise fundraising events so they can continue their campaign.

Debbie Hollingsworth is a native of London who currently lives in Oxford. She is one of the organizers of Oxford International Women's Festival, held in March every year, and is a women's rights activist.

She is also a member of the National Women's Committee Unison in the UK. She and friend Angela Jeffery visited SW Field Partner Compassion CBO in December 2013.