In the Slums of Nairobi - Women's Empowerment is Progress for All 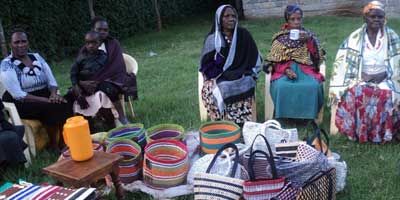 With International Women's Day on March 8 being celebrated by us and Safe World For Women, with the theme of 'Women's Empowerment is Progress for All', we would like to appeal to our well-wishers to help women access grants and come to the rescue of these honorable ladies languishing in poverty.

Many of them are trained and are saving little by little, but it takes three to four years before they can save enough to start a small business. Sometimes other issues arise making them lose their savings, such as drought, disease, or other factors.

Those who are trained by us and get some grants immediately live a successful story.

Our efforts are geared toward providing lasting solutions to curb hunger and poverty for good. Women living in abject poverty are equipped with skills and knowledge in income-generating activities.

For the last nine years, Compassion CBO has been bringing women together and helping them start sustainable projects for self-sustainability. Most women had endured scourging poverty. They had depended for years on handouts and begging in the streets. They lived and waited for someone somewhere to come and help them with a dream that never came to be.

Compassion CBO came in and worked to help them change their mindset.

The women discovered that they are the people; there is a problem - and they are the solution. What they needed was a paradigm shift.

It's then that we started a micro-finance program from some hard-earned coins, and it’s with those coins that nine years later they have been able to start several projects, which earn them some money and provide food to their families. This has happened without any external funds and only through group and personal initiatives.

Those who learned skills like sewing and knitting are exemplary examples as seen in the pictures.

With small parcels of land and using roadsides reserves they are adopting small-scale farming, growing papaya (pawpaw) trees, tomatoes, and arrowroot. They have also started goat keeping, pig farming, poultry, and beekeeping. Some have been able to start grocery shops and roadside food stalls.

Many of them come from sprawling slums in Nairobi and others from remote rural areas. Several of them are living with HIV/AIDS, and many are widows, yet they have overcome all odds to tenaciously fight poverty.

If women living in abject poverty are equipped with skills and can access funds to start income-generating activities, handouts will be a thing of the past.

The government of Kenya has set out a Women Development Fund for the last 10 years, but it has proved very hard for women in poverty to access it due to corruption in accessing funds.

Women's groups have to pay a bribe of Kes 2,000 to be trained by a government official and given the certificate of training – and there's no guarantees that they will get the funds even after bribing.

The certificate is compulsory for a group to get funds, and some government trainees are taking advantage of that.

Furthermore, when they get the funds they are required to guarantee each other and return the money to the government with interest. Many find it hard and fear that iF they fail to pay back, their belongings will be auctioned by government officials. Some have no assets to attach to access the fund.

The poor women are left out, and only the able can access and benefit from the government loans.

We are now teaching women to plant and eat traditional food, which includes vegetables such as cassava and sweet potatoes, and fruit such as bananas.

We have started planting bananas both for food crop and cash crop.

This will see increase in food rations instead of relying on corn, crops of which sometimes fail completely and no harvest causes starvation. It’s hard to empower hungry people.

Empowerment starts from the home, by having access to food. Without food, all the savings go to drain and stagnate the economic development of women reversing years of progress.

“When a poor person dies of hunger, it has not happened because God did not take care of him or her. It has happened because neither you nor I wanted to give that person what he or she needed.”

We have embarked on fighting Female Genital Mutilation (FGM) because there is no way women can be empowered when their rights are grossly violated.

We fight the outdated traditional practices that push the women backward, especially in the remote east of Kenya –Tharaka Nithi – where the practice is rampant and in slums where poverty and despair is the order of the day, and idleness has led to mushrooming of sects that are grossly undermining women.

Some of the members are responsible for reviving and practicing FGM and tobacco sniffing among underage girls. They lead cartels that have commercialized FGM and take an oath of secrecy, thus undermining empowerment of women.

These women, one of whom is aged over 90 years, came out strongly in our seminar on December 26, 2013 against FGM.

These are among the women who had previously propagated Female Genital Mutilation (FGM), which was mandatory in their days, but are now preaching another gospel that it has lost its value and must be stopped.

The two visiting ladies are Debbie and Angela from London, who had come as tourists but decided to see some women's projects and so contacted us.

Debbie is one of the organizers of Oxford International Women's Festival, held in march every year, and is a women activist.

She is also a member of the National Women's Committee in the UK. 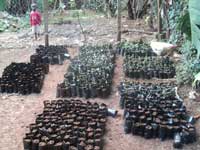 Their main customers are landscapers and real estates developers. 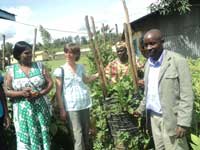 Women practicing growing vegetable in polythene bags no longer buy from the market, helping them to save. 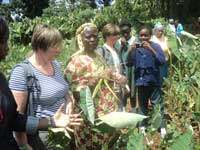 Along small streams and swampy areas women plant arrowroot for sale and consumptions. 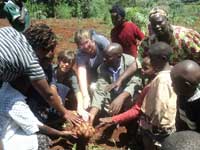 Many women are turning to growing sweet potatoes. 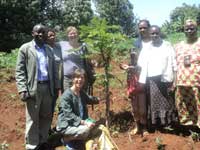 These succulent fruits are yielded throughout the year.

Women grow them for food and sell the surplus.

A woman demonstrates how they water the tomato plants.

This new project of planting tomatoes is gaining popularity as they very nutritious but expensive to buy.

Many women in ARVs needs fruits. 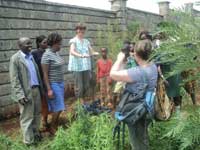 Debbie pumps water from a well, using a foot syphon that women use to water the crops. 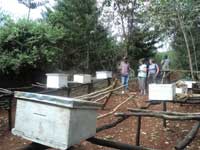 Lucy at the extreme right is physically challenged but earns through sewing and trains several women and girls in the Githogoro slum. 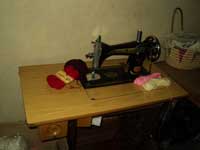 Mercy displays her knitting machine and poses for a photo with Debbie. 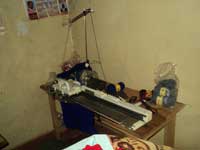 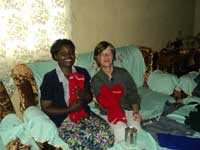 Mercy shows Debbie over 50 sweaters and poses for a photo.

She knits sweater for several children in the village and trains girls and women in sewing and knitting.

Mama Njeri, a window who has struggled for years to raise a family of four and is now a grandmother, sells food on the roadside.

She can now pay her house rent and provide food for her family. 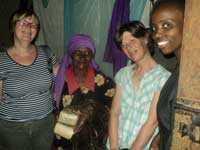 An elderly woman receives one kilogram of corn flour as Christmas gift.

Our small help ensured that she had something to eat for Christmas.

We and compassion CBO believes in helping the poor.

Shanties and living conditions in the slums 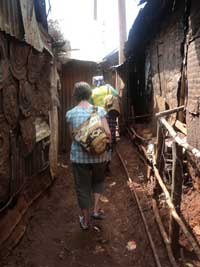 The picture are taken from the Huruma and Githogoro slums.

The living conditions there are unbearable and hostile to women and children, and highlight a need to help empower the women living there. 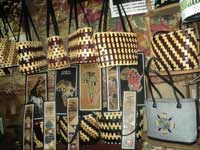 Women trained in different skills can do wonders. 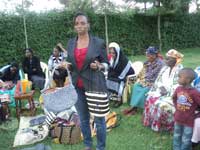 Here they display various items they have made, including shoes, from waste material. 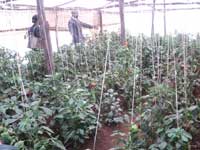 Capsicum is grown from makeshift greenhouses.

They are both sold and used as food in the house. 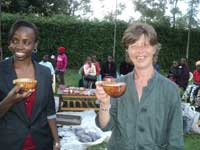 Women have revived the old method of preparing traditional porridge, and now they have commercialized it.

Earlier it was used to pay dowry, but now it is for business. 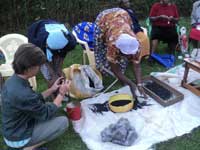 Women demonstrating how to make artificial charcoal from dust.

They use it as cooking fuel, which is very economical. 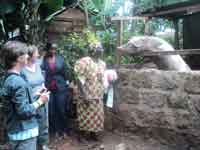 We run several pig-rearing projects, lead by women in slums and rural areas.

The baconers are sold to farmers and choice companies. 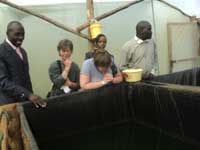 Women are now rearing fish, not in rivers but in their homestead inside makeshift green houses. 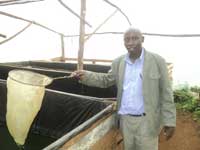 Evanson displays a fishing net used to catch fish from the artificial pond. 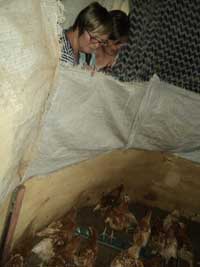 Some shanties in the slums are now turned into poultry industry, an innovation for women in the Githogoro slum. The hens give them eggs, which they use to bake cakes, boil and sell.