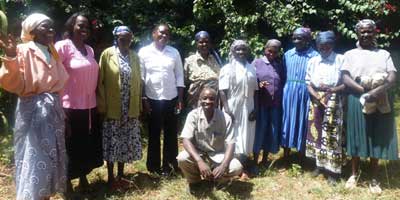 Compassion CBO was founded by Evanson Njeru. He grew up as a child in rural area from a poor family; he knew poverty and its scourge from his early days in school.

Going to school without a cup of tea – not to mention a slice of bread, was not an experience but endurance. No shoes and warm clothes to warm his body in winter and chilly mornings was the price he had to pay to know how to read and write, just because he was born in a poor family, but looked forward to overcome that and help others overcome, that was his childhood dream.

He had no alternative but to go to school.

His father told him, “I grew up without a father and my mother was poor – she could not take me to school even a single day, I don’t want you to be illiterate like me”.

Like any other boy, Evanson had to collect firewood, fetch water and look for leaves for the family goats every day after school. His father bought him first pair of shoes at age 16 when he was enrolled to high school in 1991. His father sold the only cow they had for the family to help him join secondary school.

Evanson had to work as a gardener during school holidays to raise part of his school fees and pocket money to keep him in school. His ability and determination saw him become a leader in secondary school for three years. Some of the things he remembers was one pair of shoes, a sweater and two shirts –  not to mention two pairs of trousers that he survived with for four years in secondary school.

He joined college and worked in school part time to raise money for his studies. He spent time working for children. He met many children living under extreme poverty, with whom he identified with.

Back at the campus he was restless, thinking what he can do for the children, whose interval between meals is not about hours but days and hope of joining a school is a mere dream.

During an internship he traveled to remote areas where he saw that women rights were greatly abused through genital mutilation and high levels of illiteracy among women.