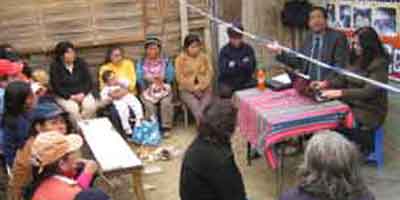 Working with Land Entitlements & Regulations in Peru and India

The Global Land Tool Network (GLTN) is a network affiliated with UN Habitat with the objective to contribute to poverty alleviation.

It works with land issues, pulling together global partners as well as many individual members. Partners include networks of civil society, finance institutions, research and training institutions, donors, and professional bodies.

The GLTN tries to improve global coordination on land through the establishment of a continuum of land rights, rather than simply focus on individual land titling, through developing pro-poor land management, as well as land tenure tools by improving dissemination of knowledge about how to implement security of tenure. Partners have identified 18 land tools in order to deal with poverty and land issues.

The Peruvian constitution does not point out housing as a human right.

Therefore the problem is particularly very bad for the poor in informal settlements.

In Peru, there is a deficit of 1.3 million houses. In the city of Lima, there are 600 settlements that suffer from lack of titling. The untitled households use different ways to solve their problems, such as occupation of old areas close to the city core, or occupying state land.

After the terrorism problem in the 1980s, families from the countryside came to Lima and occupied the hills. The problem became worse because of the lack of retaining walls.

According to state rules, families that occupy vulnerable areas are not able to get the land titling until the community improves the situation and follows up on observations made by the supervision of the state organization named INDECI (National Institute of Civil Defense).

Eviction problems are caused by the presence of mines, which constitutes a big problem for grassroots people who need to defend their rights.

ARC●PEACE Peru started in urban areas and later worked to support rural communities in the high Andeans. In both areas, the women have demonstrated their engagement and capacity to improve their areas.

The objective is to train people through facilitators formed during the training process. The trained women form management committees of five women in each. They demand land and housing rights.

After training women organize public events to approach the state and local authorities, and ask for the signing letters that each authority get. The signed letters become tools to demand land and housing rights.

The second step consists of the approval of housing laws that benefit the affected families that have lived more than 30 years without solutions. The women learn how to negotiate with the authorities. They make proposals to the Parliament (Housing Committee), with the support of legal advisors, to get the approval of titles.

This process is not easy.

To strengthen their cause, women try to get support from the grassroots women’s movement at the national level.

Women in West Bengal, India, line up to sign their names to receive land titles at a government distribution ceremony. Source: blog4dev.chLand issues constitute the core of affordable housing, especially for the poor.

Cities the world over are struggling for effective planning and legal tools that may help city governments to decide on entitlements and rights of families in settlements that are considered illegal.

In the developing countries the scale of the problem is huge, and it is particularly so in South Asian cities.

The search for a more effective basket of land tools including, GIS/GPS based mapping, land title and tenure, entitlements (including transfer and transactions), provision of basic infrastructure, access to public subsidy, plot size, and layout plans, etc. is on.

In the case of Delhi there are 1,639 authorized colonies accounting for 1.2 to 1.5 million people. To this can be added 685 squatter settlements that account for 0.4 million people.

In a major shift in public policy, the city government is in the process of regularizing the settlements and 1,291 such colonies have been notified for the purpose. Regularization implies authentication of cadastres (a register of property showing the extent, value, and ownership of land for taxation), authentication of entitlements, mutation on title and tenure, preparation of local lay-out plans, and provision of basic services and roads.

The undersigned (Misra) and the student members of ARC●PEACE India work in selective, notified, unauthorized colonies to ensure that basic services are provided by the government to the colonies in line with the Indian highest court orders. and facilitate the link between the local people and the city government, ensuring fairness in the government efforts.

We provide awareness training and work with the communities to pressure the government for issue of official tenure authorization to families for easy access to potable water supply and electricity and also public subsidies for food, health care, children education etc.

Under the current regularization process ARC●PEACE India has not seen any discrimination between the different categories of families particularly income.

Clear and identity-oriented land titles have brought significant help to the occupants of the informal colonies in the form of security of occupation and access without hassle to many subsidized food and health programmes of the government.

In Delhi, ARC●PEACE India found that land security provide families with confidence for the futurem so that they can plan better for their livelihoods.

Land titles can come in different forms; providing a confirmed land title paper (called patta in India) is a conventional one.

Eligibility certificates (not officially salable in market) make the families eligible to many facilities and rights to stay on site without the fear of eviction or elimination from support of the government in subsidized food supply, access to health care, and subsidies for the education of children, etc.

Arc Peace International is a partner of Estrategia, member of the Alliance for a Safe World.