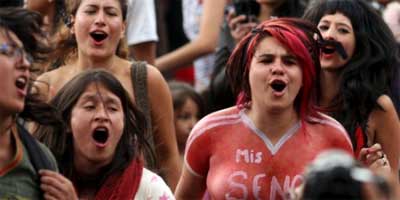 Members of the Network of Women take part in march to protest against discrimination and violence against women in Bogota February 25, 2012. | Photo: REUTERS/Fredy Builes

Thousands of Colombians marched in central Bogota on Sunday to protest against the rape and murder of a woman that has shocked the South American nation.

Around 5,000 people, including politicians, students, rights activists and police officers, rallied in the capital city’s central park shouting “Not one more (victim)” and holding placards saying “No to impunity.” 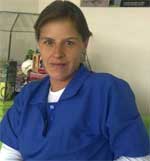 Rosa ElviraRosa Elvira, a 35-year-old single mother, was attacked on 23 May while she walked through the capital’s park after attending a night class. She worked during the day as a street vendor selling sweets and was studying at night to get her high school diploma.

Police found her, semi-naked and showing signs of torture, in the middle of the night, nearly three hours after she had called the emergency service line from her mobile phone.

Despite several hospitals nearby, she was taken to a hospital a 25-minute drive away from the site of her attack. She died in hospital four days later of her injuries.

Elvira’s case has led to an outcry in Colombia, prompting calls for tougher punishments for rapists and more justice and support for victims of sexual and domestic violence.

Question of inferior response to crimes against poor women

The slow response of the police and medical authorities also has raised questions about the treatment poor Colombians receive.

According to Colombia’s National Institute of Legal Medicine and Forensic Sciences, 500 women have been killed so far this year in crimes relating to femicide, defined as the gender-related violent murder of a woman by a man.  Last year, 51,000 women were victims of domestic and sexual violence in Colombia. In many cases, assaults on women are carried out by men under the influence of drugs and or alcohol.

Violence against women is thought to be far higher than official figures show, say local women’s groups, as women often feel too ashamed to come forward to report the crime. Some doubt they will receive help from the police, while others do not know where to get help.

“We need to be more effective to end violence against women,” Santos said during an official event against gender violence last week.

“It’s to do with education, with domestic violence, the home environment, with social attitudes, with Colombia’s macho attitudes, and many other factors,” Santos added.

A man has been arrested, accused of torturing and killing Elvira. He denies the charges. A second suspect turned himself in to the authorities on Sunday but was released without charge.