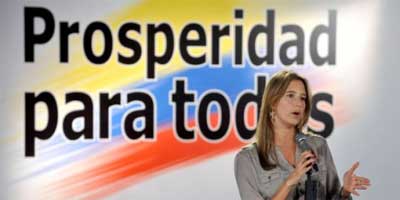 Colombia's chief advisor on women's equality speaks to TrustLaw about domestic violence in the country.

In Colombia, a country still beleaguered by conflict, violence has disrupted the lives of millions over the past five decades.

But for the country’s women, the greatest enemy of all is the violence taking place at home, says Cristina Plazas, the country’s chief advisor on women’s equality.

“I understand that there are other enemies like paramilitary and guerrilla groups, drug trafficking and gangs,” said Plazas.

“But really there’s no enemy greater than domestic violence.”

In 2010, a quarter of the 1,444 women murdered in Colombia were killed in their homes, according to Colombia’s National Institute of Legal Medicine and Forensic Sciences.

Nearly 60 percent of the 51,182 reported incidents of domestic violence against women that year took place in their homes, it said.

The majority of assaults on women are carried out by current or former husbands and partners, who are often under the influence of drugs and/or alcohol.

“The home has become a much more dangerous place for many women and children in Colombia than the street. We have to fight against that as a country,” Plazas told TrustLaw in an interview.

Sitting in her office in the neo-classical-style presidential palace in downtown Bogotá, just four doors away from the president’s office, Plazas is doing her bit to fight against gender violence.

She speaks in a passionate and no-nonsense manner about the importance of raising awareness among lawmakers and society in general about women’s rights, the high levels of domestic and sexual violence against women and the high prevalence of teenage pregnancy.

Colombia’s macho culture is a key part of the problem, says Plazas.

There is a prevailing attitude in much of Colombian society, even among some women, that it is somehow a woman’s fault if she suffers violence.

“One of the main reasons behind violence against women in Colombia, and the rest of Latin America, is machismo. Some men think that to be a man they have to control women and believe women have to be at home looking after the children and doing the housework,” Plazas said.

“The key message we want to get out is that nothing justifies violence against women,” she added.

But many cases don’t come to light because domestic violence is still considered a private matter that should be discussed behind closed doors.

Plazas aims to put the spotlight on domestic violence and on discrimination against women.

She says lawmakers must understand that tackling violence against women and improving women’s rights cannot be pigeonholed as a minority issue.

“Don’t tell me it’s a minority issue when we (women) make up half of the country’s population,” said Plazas.

“If we want a country that’s developed in social and economic terms we need to reduce the wide equality gap between men and women.”

Improving women’s rights, says Plazas, is a relentless exercise in lobbying lawmakers – from government ministers to judicial officials, to local mayors and governors in remote towns across Colombia.

Plazas and her team of 20 people work with government officials offering them advice and support on how to implement existing laws protecting women’s rights.

“My job is about building up allies, my aim is that every government policy and development plan at the central and local level includes programmes and a budget set aside that helps promote women’s rights and ends abuse against women.”

Nearly 20 percent of teenage girls in Colombia aged between 15 to 19 are or have been pregnant, according to government figures. The government aims to reduce that figure to 15 percent by 2015, saying the problem exacerbates poverty and hampers economic growth and development.

Being a handpicked presidential appointment, Plazas has a certain amount of clout and stature. Since she took the job nine months ago, the issue of women’s rights and violence against women in Colombia has become more visible in the national media and is less of a taboo.

But there is still a long way to go before entrenched machismo disappears and significant progress is made in reducing incidents of domestic violence in Colombia.

“We’ve only just started to talk about these problems."