If you are from South America, we don’t need to explain to you who Negra Li is.

Brazilian hip hop artist, actress and mother who grew up in one of the toughest, most violent neighborhoods of Sao Paulo city.

A woman who believes in using her music to celebrate female strength and survival.

If you are from the USA, UK or Europe you may have danced the night away to Akons “Beautiful” in a club.

That singer was Negra Li. A strong woman who is becoming more and more of an icon outside her home country as her music and acting career stretches across the globe.

In the following interview, Brazilian Trustee of Safe World, Fer Amaral, asks Negra about her life and her passion for women's issues.

We are so excited to have you support our Safe World for Women campaign. You grew up in a troubled and violent region of São Paulo. How did violence against women effect you?

I witnessed and lived in violent situations which began in my own house; my father drank excessively. He was physically violent and spent his time drinking in his home made bar.

It was left to my mother to work and support the family.

My father died from alcohol abuse and I try to remember only the positive about him.

I think all this helped me to admire my mother even more.

She is a kindergarten teacher, who managed to hold together a family of five, despite all the adversities of Day-to-day life of a troubled and violent region of the city.

She even helped friends who suffered humiliation, verbal abuse and moral staged by their husbands, boyfriends and other men.

MY MESSAGE IS LOVE

Music is a fundamental part of your life. Do you believe that we can change thing for the better through music. How could music help with our campaign?

I started singing because I LOVED to sing! I sang with friends from school. EVERYTHING in my life was the reason to turned to music.

I joined a rap group RZO (guys from the west). Suddenly, I realized that this hobby, which I liked so much, had become serious!

It was time to dedicate myself to study, to battle and soon I was on the cover of a disc “Free Black” – Negra Livre.

This is where I grew up and matured.

I opened my horizons and gained new responsibilities. I discovered a whole world, much larger than the one I lived in the village Brasilândia.

I learned that women can have a voice without losing the tenderness and for this reason I talk a lot of love in my music.

This is the message that I want to go through my lyric…LOVE!

"Antonia" by Tatá Amaral. It dealt with some of the issues you have experienced in your own life. In it we see many situations of violence against women, prejudice and the view of women as sexual objects. What are your feelings on the current situation in Brazil?

Currently there is the Defense of Women Police, to investigate and punish offenders. There are many campaigns encouraging women to denounce their abusers.

Still, however, the cases of violence against women are still present.

Every day we get reports of women raped!

It is important to recognize that violence against women is not restricted to race, age or social status. 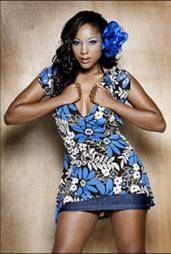 Determined to escape their poverty-stricken lives, four talented young women living on the outskirts of Sao Paulo, Brazil, form an all-female rap group but find their road to success is riddled with sexism, racism, and violence.

One by one, they succumb to their grim realities...until they discover that out of struggle come strength, and out of strength, the courage to continue on. See Trailer

In the film you represent a woman who faces challenges without fear to pursue her hopes and dreams. In your career as a singer and actress you have suffered prejudice as a woman in an industry dominated by men? How have you faced and dealt with this?

When I began my career as a backing vocalist for a rap group, I lived constantly with 15 men, who instructed me to wear the clothes of my brother (covering my body).

To only greet men with a handshake (no kisses) and never get the "giggles". To make sure my behavior could not lead to “misinterpretation”. Can you imagine that??

Only when I left the group I was wearing women's high jump shoes and clothes, and it was a transformation for me!

Would you like to leave a message for women who were and still are victims of violence against women?

No one lives alone.

The happiness of a person is in love and to be loved. So we must respect ourselves, men and women, women and men. We must cultivate the life!

'So we can change the world by just being together.
Not much to ask.
Just give a little, respect the other, love everyone, to be fair. '
"Mundo Jovem" (Paul Ralphes/Negra Li)

For more information about Negra Li: