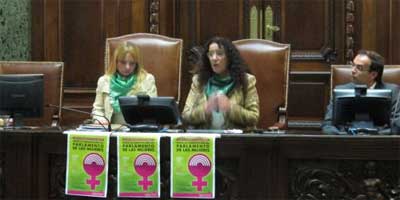 Buenos Aires recently established a new body within the city legislature to handle bills that address women’s issues. Called the Parlamento de Mujeres, it comprises dozens of organizations that fight for women’s rights.

Some 80 women line up on a Monday afternoon outside the door of the Sessions Hall inside the city legislature of Buenos Aires. They all carry folders in their hands, hugging them to their chests like treasures.

They constantly open them, read them, look at each other and close them. At times, they talk in small groups. There are smiles, laughter, meetings and greetings, from hugs to a simple “hola.” Anything to suppress the anxiety of waiting.

Inside, the room is shaped like a semicircle and shares the same atmosphere as the corridor. People are in a hurry, running around to finish the preparations. They gesture to one another as they organize the final details of this special meeting – the first meeting of the city’s Parlamento de Mujeres. The doors open, and the women who had been waiting anxiously outside the door enter with their folders in hand and take their seats.

This is the inaugural session of the new Parlamento de Mujeres’ semiannual meetings, the first held on the International Day of Action for the Health of Women and the second planned for September. The group will present and hear proposals related to women’s issues and eventually advance the strongest ones to the next phase of the city’s legislative system.

In the center of the room sit the three members from the city Chamber of Deputies charged with presiding over the Parlamento de Mujeres.

“This initiative has to do with the voice of the women of the organizations being expressed, to go through these walls so that we can make way for new transformations,” says one of the deputies, María Elena Naddeo, president of the chamber's Comisión de Mujer, Infancia, Adolescencia y Juventud.

The women filling the room listen to Naddeo’s words attentively. As the representatives of 58 women's rights organizations, they act as symbolic legislators in the Parlamento de Mujeres. In addition to their folders, each woman has the name of the organization that she is representing in front of her and the number of the proposal that she will read during the session. The group aims to fortify local institutions working on women’s issues by taking their most important initiatives and transforming them into bills.

Mirta Coloca, representing Mujeres Como Vos, a nongovernmental organization that analyzes proposals that aim to improve women’s quality of life, can’t hide the excitement she feels to be present, occupying the spot of a legislator and having a voice in a legislative body for the first time.

The mission of the Parlamento de Mujeres is to smooth the path for women-centric bills to become law. Topics range from labor to gender identity rights. The parliament relies on citizen participation, inviting civil society organizations to present their bills and, in doing so, fostering communication between the society and the city legislature. Although many women in society are still unaware of the new parliament’s existence, those who are say they are grateful that their needs are being represented.

The idea for a women’s parliament began in 1998 in Mexico as informal sessions. In those years, Naddeo says she proposed the idea of special sessions for women to the Buenos Aires city legislature, but it didn’t take. Then in April 2011, it won the support necessary for city legislators to approve the formal creation of the Parlamento de Mujeres.

The plan also established a committee of three members inside the Parlamento de Mujeres in charge of organizing the semiannual sessions. The representatives at the first meeting voted to elect this governing trio, which will be re-elected annually. The members of this lead committee will come from the participating organizations and will work together with the deputies presiding over the Parlamento de Mujeres to advance the strongest bills.

Among the members of the lead commission chosen during the first session is Fabiana Túñez, representing La Casa del Encuentro, an organization that fights for the formation of a social network and policies to combat all forms of violence, abuse and discrimination against women and children. Together with Túñez on the committee are Virginia Franganillo, of the Asociación Civil Nueva Ciudadanía, and Martha Rosenberg, of the Foro por los Derechos Reproductivos. Túñez shows enthusiasm about the opportunity to advance bills so that they don’t get stuck in the many times long legislative process.

“We are happy with the parliament because it has a progressive dynamic that permits advancement,” she says.

From the center of the room, María José Lubertino, another of the presiding deputies, says that the parliament is going to fight for real equality of gender, not just formal equality. She highlights the existence of historical inequality between men and women.

In pursuit of real equality, the representatives from the various organizations read their proposals during the session, the same women who had clutched their folders so carefully to their chests earlier that afternoon.

Some of their initiatives emphasized labor issues, while others asked for change in the social or political arenas. One woman cited the lack of child care and places for breastfeeding for employees’ childrens in their places of business. Others put forward arguments in favor of legalizing abortion and implementing sexual education in primary schools. Still others emphasized the necessity of fighting for the eradication of violence against women. Each proposal received a collective applause.

“We have been long working on the issue of prevention in health,” Coloca says. “We know that an on-time diagnosis saves lives. That is why one of our projects aimed at that issue for us is very relevant.”

Marcela Romero, representing the Asociación de Travestis, Transexuales y Transgéneros de la Argentina, received a welcoming applause in recognition of the success of the approval of a gender identity law earlier this year by the Argentine Congress, which allows people to legally opt for which gender they feel they belong to, regardless of the gender they were assigned at birth. Romero acknowledges the applause with a smile and thanks the parliament for inviting her organization to participate in the inaugural session.

“That was very important for us,” she says. “Thank you for the invitation.”

Lubertino says that the Parlamento de Mujeres constitutes an opportunity to mobilize the structure of the state and to transform the legislative environment into a space of citizen participation.

Túñez says that the importance of the organizations’ involvement in the new parliament lies in their direct contact with and representation of the citizens.

“We are in the field, in what affects the reality of the women,” she says. “We needed a more organic environment where we could make proposals from civil society.”

After more than five hours, the session ends. Outside, night has already fallen.

Many women have no idea that the Parlamento de Mujeres exists, let alone has just completed its inaugural session. But some are aware and celebrate it, like Amelia Aranda, a social worker, and Graciela Arancibia, a lawyer.

“It is so important that those issues of vulnerability are in the public agenda,” Aranda says. “In all the social stratospheres, the women, we are qualified to raise a family. In many cases only the support of the state is lacking.”

Arancibia values the setup of the parliament. She says that women’s social and labor needs are planted directly in the organizations that are representing them in the parliament, so that they can guide the necessary bills in the legislature.

Inside, the session comes to an end. Enthusiasm floats around the premises as the words spoken during the meeting continue to swirl around in the participants’ minds. Left alone, Naddeo synthesizes the objective of creating this parliament.

“The fight of women for their rights and the claims of the female gender look to overcome oppression and discrimination,” she says. “It is about a contribution to the construction of a society without violence and more equal.”