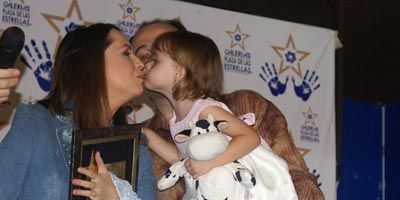 Venezuelan actress Gabriela Spanic is author of Mi Vide Entre Lineas (My Life Between Lines), her story of living with domestic violence.

She suffered severe domestic violence from her former partner, who often threatened to commit suicide in front of her.

"The torments that I lived were the life I lost. Feelings of passion, pain, deep melancholy and a lot of confusion invaded me. The light which once protected me, turned dark, cloudy, it went far off, it dissolved in the squall of emotions that became our relationship, where our passion drowned."

"I've had several violent situations in my life. Since I became a public figure, I've kept this to myself because women who've suffered from violence are always at risk of being crucified, and feel great frustration for not being able to scream the truth to the world, because people would never believe them.

One day, being seven months pregnant, I almost lost my son due to depression, insults, and the unfair, public harassment of the father of my son.

I got the courage to talk.

I was no longer afraid

“Once I told about  my experience before some reporters through an interview, where I spoke of my experiences, and the only answer--or opinion, I received was, 'How is it possible that Gabriela can speak like this of her son's father? He is the father of her child; she should remain silent'.

There will always be a macho image, and an image that women should bend over for others--where society insists that you only have to smile and be glamorous.

I remember that in my book I wrote a chapter called “Letter of Farewell and Goodbye”, where I talked of a very painful experience

My partner was also a public figure

He always wanted to commit suicide in front of me, I was always saving his life, I tried to keep him calm, I took him to see a psychologist, where he must have gone three times at the most because he never did his part.

I remember clearly when he was banging his head against the walls of the shower and I got into the shower with him to calm him down; we wrestled, I was trying to avoid that he hit me and hit himself, he grabbed me by the neck and in his eyes I read that he was going to break it, I was able to control the situation, but there was a moment when without me realizing it my legs bent, when I woke up I was being helped by 911 paramedics

I opened my eyes, I was all full of cables, and they were asking me what happened.

"Fatigue and tiredness prevented me from sleeping; my being did not enjoy the pleasure of life. My disturbed wishes and my impoverished hopes were limited, they got scared, they evaporated."

I felt stifled, there were several incidents where my soul was very down and sad, emotionally beaten, and when I finally managed to publish my book which was translated into Romanian, Lithuanian, Slovenian, because I could not do it in Latin America and the United States, I had many people against me

Doors closed because this person with whom I lived those moments of terror, branded me as crazy, that it was me who beat him

There were rugged situations. Being a woman, having been successful, recovering from painful situations in my life, being a single mother, I have to keep on going and decide to be brave, determined, strong, I have to let them say whatever they want to say about me, and because I do not have "a male figure" next to me to represent me, they blame you, humiliate you, they never put themselves in your position, because they want to continue defending a macho society, where there is no authority, they only intend to continue damaging you because you are a woman.

I have proven 100 % that the power of the macho is much stronger than racism. And I do not want to blame anyone, because it is not my place to judge, but I want to ask all the women in this world not to be cowards, because every time we keep silent in complicity, we are feeding the male society which in reality needs guidance, it needs support and it needs to make those who have committed crimes against us, pay for them.

Before all of this I used to work for foundations such as Peace Leaders, where I heard chilling revelations, which undoubtedly made me shudder. These women gave me strength. In many cases, they even lost the lives of their children, and of their mothers, because they were defending them.

Others  did not have time to tell their stories in order to be saved.

The silence kept before this situation was forgotten by many.

Many women say Domestic Violence does not affect them

But my conclusion is because of this silence the violence is not going to disappear; we become accomplices of it.

I participated and accepted your abuse, your indifference, your interrogations. You hit my hope, you filled me with the mud of your pride, a pride that eats away at you, and which dwells in your feeling of guilt, that drags your mistaken life.

“I want to ask all the women in this world not to be cowards, because every time we keep silent in complicity, we are feeding the male society which in reality needs guidance, it needs support and it needs to make those who have committed crimes against us, pay for them.”

Time has passed, the future waits for me, my life is smiling at me, my life wants to live. Thanks to you "my crazy unloved one" I now posses a trophy that adorns, that preserves the purity of my soul, of my womanhood charms

Let us now be aware of all that I’ve said, and of all that I’ve heard. I am very grateful for you “A Safe World for Women” on behalf of all the women who have died from abuse, that you are making a halt along the way to think of all those women who every five seconds are being abused somewhere in the world.

ctress Gabriela Spanic was born in Caracas, Venezuela. She is best known for her work in telenovelas. She is very known by her character in the novel “La Usurpadora” that was sold in more than 125 countries around the world, and translated to more than 25 languages. She is also an an activist working with: “Together Against Cancer”, Red Cross;  and Teleton, “Join the Fight” (about HIV),